Dazzle Coffee celebrates 10 years in operation with deals for customers 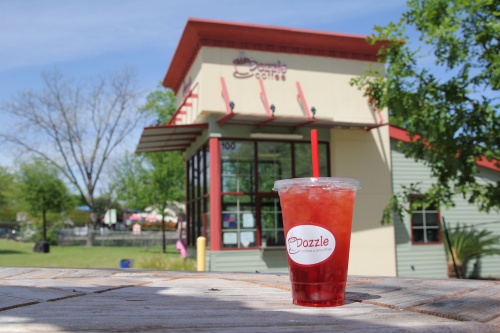 The Fruity Red Bull is one of the drinks served at Dazzle Coffee in Round Rock and Pflugerville.

Pflugerville-based Dazzle Coffee is celebrating 10 years in operation this summer with 10 weeks of deals for customers at its two locations in Pflugerville and Round Rock.

"We opened in 2006, so it's been 10 years which is crazy and nice since there aren't many companies that can do that," co-owner Mike Scheschuk said.

The promotions started March 28 and will run through June 5. The week of April 4-10 features $1 large coffees and iced coffees.

In addition to the Pflugerville location, Dazzle Coffee opened its second location in Round Rock on Gattis School Road in December 2015.

Scheschuk said he partly credits the 10 years in operation to having a dedicated staff, many of whom have been with the company since it started.

"We've been able to keep a lot of consistency with the employees, which is great," he said. "They've gotten to know folks so it becomes more than a daily stop for coffee; it also becomes social hour with the employees."

Scheschuk also attributes Dazzle's success to the shop spending money on high-quality ingredients to go into its drinks.

"All of our chocolate is Ghirardelli. All of our smoothies are 100 percent crushed fruit. All of our large drinks have two shots of espresso compared with one you find in other stores," he said. "People recognize it, because our prices are about the same as the big guys but the product quality is better."

Scheschuk said the deals are his way of saying 'thank you' to Pflugerville residents.

"The community in Pflugerville has been absolutely fantastic," he said.

The promotions are as follows,