See what Lt. Gov. Dan Patrick had to say about education, immigration, Texas' economy and the new movie about Wendy Davis 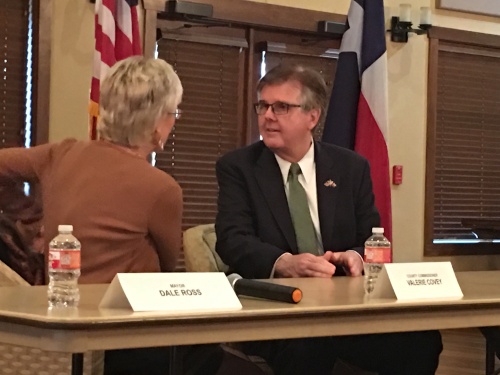 On growth
Patrick said handling its massive population growth is one of the biggest challenges facing Texas, and it affects nearly every aspect of managing the state.

Patrick noted that there were 18 million people living in Texas in 2000, and today, the population is 28 million with an additional 15 million residents expected by 2040. Managing the influx of new residents can be tough when the state legislature only meets every other year, Patrick said.

Texas is the 10th largest economy in the world, and ranks higher than Russia's, Patrick said. As Texas doesn't have a state income tax, it relies on sales tax to make up a significant part of the state budget. If the state goes over budget, they'll cut spending instead of raising taxes, he said.

"We're not in the tax-raising business," Patrick said. "Texas is booming, and it's because we're a low-tax state."

Lt. Gov. Dan Patrick spoke to Georgetown residents for nearly an hour and a half Wednesday morning as part of the Heritage Oaks Distinguished Speaker Series.[/caption]

On education
The majority of Texas children will always be in public schools, Patrick said. A robust public school system and good teachers are necessary. With the growth the state is facing, they'll need hundreds of thousands of new teachers, Patrick said.

According to the Alliance for Excellent Education, a national education policy and advocacy organization, high turnover among teachers costs school districts $235 million annually in Texas alone.

“We cannot give every student who wants to go to school free college,” Patrick said.

However, he said he hopes to expand loan-debt relief for young educators in exchange for working in districts with teacher shortages.

Patrick said it is important for students to learn skills that will result in them getting jobs after they finish education, and that not enough young people chose to purse blue-collar jobs.

“We have too many kids getting a BS degree in BS," Patrick said.

On healthcare
Another issue that comes with the state's growth is ensuring Texas has enough doctors to serve residents, Patrick said.

Health care advocates say there is a shortage of doctors serving rural and low-income Texas communities.

Patrick said the state has put millions of dollars toward making sure medical students have residencies available in Texas. Too many students were going out of state and settling there, instead of coming back to practice in Texas, he said. With more people coming, it's imperative Texas has doctors to keep up, he said.

On immigration
In 2017, the Texas Legislature passed Senate Bill 5, also known as the “sanctuary cities bill.” The law requires Texas jails to honor federal immigration detainer requests and ensures the right of any law-enforcement officer to inquire about immigration status in the midst of a legal detainment. The bill is currently being challenged in the courts.

"It’s about keeping you safe," Patrick said. "We can’t have that crime in our cities. Sanctuary cities give bad guys a place to hide, in plain sight."

He acknowledged that most immigrants coming to America are good people, seeking to better their lives. But that can be a problem, too, he said, as Texas has limited resources. On abortion
Patrick, a longtime proponent of pro-life legislation, brought up Wendy Davis’ filibuster during the 2013 Texas Legislature and called it “disgraceful.”

Davis’ filibuster lasted 13 hours and prevented a vote on Senate Bill 5, which have created some of the strongest abortion limits in the nation. The bill later passed during a special session.

“It was a very bad night,” Patrick said. “Now, they want to make a movie about it. I’m very disappointed in Sandra Bullock, (who will play Davis)."

Patrick said he has been sent the movie script and will be portrayed as the villain of the story.

On water
During a question-and-answer session with the audience, a Georgetown resident asked how the state will provide water for everyone with the explosive growth.

"We'll just have to have more capacity," Patrick said. "And I think we'll get there."