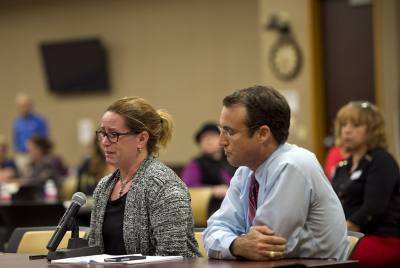 Jean Gearhart gives a tearful statement with her husband Troy Gearhart to the panel about her special needs child. U.S. Department of Education officials held a meeting in Edinburg on their tour of Texas to hear community members' experiences with special education.

In the plan, the TEA addresses federal concerns about Texas' failure to serve students with disabilities, in part by proposing to hire state-level teams to support school districts in improving conditions for special-needs students and monitor those that are doing especially poorly. The plan will cost an estimated $84.5 million over the next five to six years.

The TEA promised to take regular feedback from special education advocates and parents throughout the process of finalizing the plan.

After a 15-month investigation, a U.S. Department of Education report last week found Texas had violated federal law by effectively capping the number of students with disabilities who could receive special education services and failing to ensure school districts properly educated those students. Gov. Greg Abbott ordered Texas Education Commissioner Mike Morath to come up with a reform plan within seven days, although the federal report did not specify a timeline.

Federal officials told the TEA to come up with a plan to find students who were denied services, train school employees on how to find and educate students with disabilities, and monitor how school districts are providing special education services.

The TEA's plan responds to those mandates in these ways:

The monitoring report found that the TEA was more likely to monitor and intervene in school districts with higher rates of students in special education, creating a statewide system that incentivized denying services to eligible students.

Through numerous interviews with educators in 12 school districts, federal officials reported a widespread fundamental misunderstanding of how to serve students with disabilities. Many school administrators and teachers used tactics to delay or refuse to evaluate students for federally funded services, and saw special education as a "last resort" for struggling students.