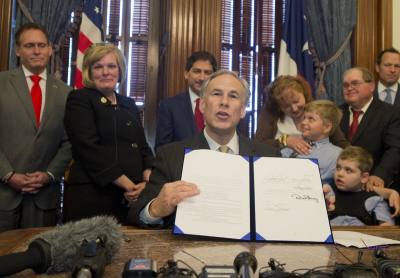 Gov. Greg Abbott signed the Compassionate Use Act into law in 2015.

Medical marijuana is now being grown in one Austin area dispensary.

Compassionate Cultivation is one of three companies in Texas licensed to grow cannabis high in CBD and low in THC. That means it won't produce a high, but it could help treat patients with incurable epilepsy.

Gov. Greg Abbott signed the Compassionate Use Act into law in 2015. Two years later, Compassionate Cultivation is one of three providers approved to grow medical cannabis for epilepsy patients.

“This is just huge for people with intractable epilepsy,” said Donna Stahlhut, CEO of the Epilepsy Foundation of Texas.

Compassionate Cultivation got their state license Oct. 31. The company is located in Manchaca near South Austin.

“Now we've got a pretty healthy initial crop that we're excited to show you guys, that, for us, represents history in the making,” said Morris Denton, CEO of Compassionate Cultivation.

For Stahlhut, this history is long overdue.

“I have a son, who is grown now, but started having seizures when he was five years old. And every day he had at least one seizure, one day he had 60 seizures,” Stahlhut said.

Stahlhut said patients like her son have been hoping for an alternate therapy to treat epilepsy without the damaging side effects that may come with other medications.

After the Compassionate Use Act was signed into law, CBD oil became a possible treatment option for Texans who haven't responded to other seizure medications, but, before they can purchase the product in the Lone Star State, patients must receive a prescription from two doctors registered to treat epilepsy.

“Everybody will not respond to this, but for those that do it can change their lives,” said Rep. Stephanie Klick, R- Fort Worth.

Klick was one of the legislators that helped get the Compassionate Use Act passed. Tuesday, Compassionate Cultivation honored her for her involvement in that process during a dedication ceremony.

“We're honoring her by naming the vegetation room after her and then we’re also naming our first strain after Representative Klick, so it's called our Klick strain,” Denton said.

The Epilepsy Foundation said about 150,000 Texans with intractable epilepsy could benefit from treatment with CBD oil. Because it was not previously available in the state, many families already moved just to gain access to it.

Denton hopes one day their cannabis will be used to treat other illnesses too.

“If you'd asked me three years ago would I be here today, I would've said no way. So it's hard to think where I might be three years from now because the winds have changed. Once they start to move they can blow pretty quick,” Denton said.