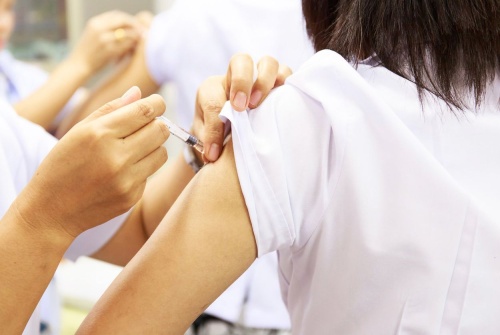 As of Jan. 4, seven deaths have been reported by Austin Public Health due to flu-related illnesses.

Texans are falling behind the rest of the country in getting vaccinated against the most common sexually transmitted infection — making them more vulnerable to several types of cancer, a new study says.

Human papillomavirus is preventable through a routine vaccine recommended by the Centers for Disease Control and Prevention for adolescents, but Texas currently has the fifth-lowest vaccination rate in the country, according to the study released Wednesday by the University of Texas System Office of Health Affairs. The report lays out vaccination coverage estimates for 13- to 17-year-olds in Texas based on data from the National Immunization Survey-Teen.

According to the report, just 39.7 percent of women and 26.5 percent of men in Texas between the ages of 13 and 17 were up-to-date with the vaccine in 2016. Only Wyoming, Mississippi, South Carolina and Utah had lower vaccination rates. Rhode Island and the District of Columbia had the highest vaccination rates at 70.8 and 60.2 percent, respectively — both require HPV vaccines for school entry. The national average was 43.4 percent.

About 90 percent of men and 85 percent of women in the United States will contract HPV at some point in their lives, according to the report. Symptoms can include warts on or around the genitals.

More importantly, however, the virus has been linked with cancer of the cervix, vagina, penis, mouth, throat and tonsils. Texas saw 2,801 cases of HPV-associated cancer between 2009 and 2013, according to the CDC.

Vaccination against HPV is ultimately meant to protect against these forms of cancer, said Dr. David Lakey, a former commissioner at the Texas Department of State Health Services and one of the authors of the report.

Some of the misinformation about the virus and the vaccine has made it difficult to reach patients, Lakey said.

“When the vaccine came out, it was labeled as a vaccine against an STD,” he said. “It was thought, 'Our kids will not engage in sexual activity; we don’t need this.'”

The report also found that HPV vaccination varies across the state. Dallas County had the lowest rate in Texas with 23.9 percent coverage, while El Paso County had the highest with 66 percent.

“Health educators and employees who work with the vaccination program are trained to provide knowledge about vaccinations to our community, a factor in getting people comfortable,” said Armando Saldivar, a City of El Paso Department of Public Health spokesperson. “There’s a mindset that vaccinations are a good thing.”

The report said Hispanic adolescents in the state had the highest rate of vaccine coverage and that men were less likely than women to be vaccinated. It also found that those living in urban areas were more likely to be vaccinated than rural residents.

Greg Parkington, health systems manager at the American Cancer Society, said his group is working to close the geographic and gender gaps in HPV prevention.

"There's a lot of misinformation out there about the vaccine, but bottom line: The vaccine is safe," Parkington said. "It should be no different than getting a polio, measles or mumps vaccine — it's cancer prevention, and people should take a strong interest in the vaccine to protect their children's future."

Disclosure: The University of Texas System has been a financial supporter of The Texas Tribune. A complete list of Tribune donors and sponsors is available here.