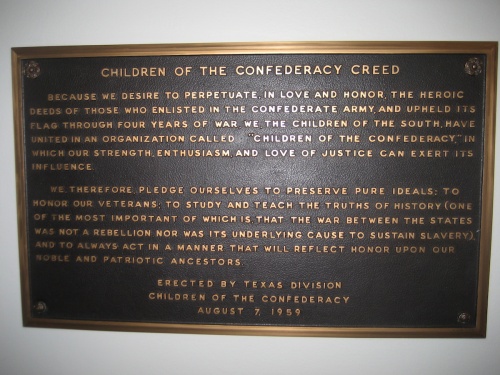 The Children of the Confederacy Creed Plaque is located inside the Texas Capitol.

A plaque at the state Capitol that honors the Confederacy needs to come down, according to Texas House Speaker Joe Straus.

In a letter he sent to the state preservation board Speaker Straus said the marker is not accurate.

Under the Capitol dome Tuesday afternoon the performance of a string ensemble drew the attention of those touring the historic site. What few if any noticed was located down this nearby hallway a bronze wall plaque.

It’s not particularly ornate, but it has caught the ire of House Speaker Joe Straus. In this letter sent Tuesday morning to the state preservation board, Speaker Straus made an official request for the plaque to be removed.

It was placed in 1959 by a group called the Children of the Confederacy Creed. It honors those who died in the civil war but also advocates’ teaching the war was not a rebellion and that slavery was not the underlying cause.

In his letter, Straus wrote: “Confederate monuments and plaques are understandably important to many Texans. But it is important that the historical information displayed on the capitol grounds is accurate and appropriate. The Children of the Confederacy Creed plaque on the first floor of the Capitol does not meet this standard."

Straus went on to say that Texans are not well served by incorrect information about our history.  The plaque is one of almost a half dozen Confederate monuments and memorials on the Texas Capitol grounds. Speaker Straus renewed his called to study the historical accuracy of all of them and suggested some of the language on them could be updated.

Lt. Governor Dan Patrick and Governor Greg Abbott—both sit on the state preservation board with Speaker Straus. A spokesman for the governor said Abbott stands by his comment made last month which read in part: "If we do not learn from our history, we are doomed to repeat it. Instead of trying to bury our past, we must learn from it and ensure it doesn’t happen again. Tearing down monuments won't erase our nation's past, and it doesn't advance our nation's future.”

The discussion is one that Siky Siapantas and his wife, who were visiting Austin Tuesday, have heard before on their travels.

"In Budapest they've taken down all of the communist statues, because the people didn’t want them, and they put them in a park, and if you want to go see them you go visit the park and they are all in one area. So that could be a solution,” said Siapantas.

Essentially that’s what the University of Texas did recently. Statues of prominent confederates were removed. A display was setup at the Briscoe center for American history to explain why the statues were made and how they ended up on the south campus mall.

A spokesperson for the state preservation board told FOX7 that the review requested by the Speaker last month is still being done. The issue has not been placed on any agenda because no board meetings have been scheduled.