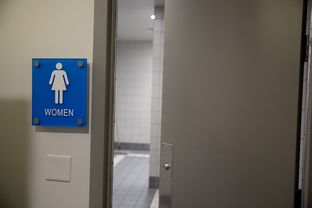 As North Carolina lawmakers voted Thursday to revise that state's bathroom law, Texas Republicans pushing a similar measure said they are not backing away from their proposal.

"North Carolina appears to be replacing their original law with a new measure that is similar to our state's SB 6, the Texas Privacy Act,” Republican state Sen. Lois Kolkhorst, the author of the Texas proposal, said in a statement. She added it’s “no surprise the Texas Privacy Act is seen as a thoughtful solution to protect everyone equally while allowing businesses to set their own policy."

North Carolina lawmakers on Thursday signed off on a repeal and replacement of its “bathroom bill” — a controversial 2016 law regulating bathroom use that required people to use public bathrooms based on their "biological sex." A recent AP analysis indicated the measure would cost the state more than $3.76 billion over a dozen years.

But the compromise between Cooper and Republican lawmakers still prohibits cities, government agencies and school districts from allowing transgender individuals to use public bathrooms based on gender identity, meaning bathroom regulations would be left to the state. It also enacts a three-year ban on the creation of local nondiscrimination ordinances that regulate private employment practices and public accommodations, including bathrooms.

The Texas proposal includes some of the original restrictions that North Carolina is now repealing. Kolkhorst’s Senate Bill 6 would limit bathroom use in government buildings on the basis of “biological sex” rather than gender identity and would nix local anti-discrimination laws meant to allow transgender residents to use public bathrooms based on gender identity.

Texas Lt. Gov. Dan Patrick, a Republican who has championed the bathroom proposal, said Thursday that North Carolina revised its law "to focus on the same issues we addressed with Senate Bill 6."

"North Carolina has affirmed that only the state can regulate policies regarding public school and government building restrooms, showers and changing facilities," Patrick said in a statement.

While Republicans have pushed the legislation as a means to keep men out of women’s bathrooms, the Texas proposal — like the North Carolina measure — has been criticized as discriminatory against transgender people. It has also drawn fierce opposition from members of the business community who fear it could lead to event cancellations similar to those North Carolina experienced.


Among those cancellations was the NCAA’s decision to move seven 2016-2017 championship games out of the state. The NCAA has at least eight events scheduled in Texas through 2019, including the 2018 Men’s Final Four, which is slated to be held in San Antonio.

North Carolina reportedly moved toward a compromise on the legislation to avoid losing college sports championships through 2022. Arguing North Carolina lawmakers “panicked” over the deadline, Patrick rejected the notion of allowing the NCAA “dictate the states on policies.”

“They can take away our basketball games,” Patrick said during a Thursday morning radio interview on The Mark Davis Show. “I’m not going to let the NCAA run the state of Texas. This is absurd.”

The NCAA has yet to weigh in on Texas’ proposed “bathroom bill."

Meanwhile, tourism officials from big Texas cities have warned that the proposal could cost them hundreds of millions of dollars in lost revenue. Almost a week after Houston hosted Super Bowl LI, the NFL raised the prospect that SB 6 could impact future championship football games in Texas. And in a statement regarding Texas’ proposal, the NBA has indicated it considers “a wide range of factors when making decisions about host locations for league-wide events like the All-Star Game; foremost among them is ensuring an environment where those who participate and attend are treated fairly and equally.”

Pointing to the North Carolina vote, representatives for the Texas business community on Thursday indicated it should serve as another warning sign for Texas lawmakers.

“The turmoil of the past year, coupled with today’s action by North Carolina lawmakers, should send a loud and clear message to our own Texas Legislature: reject Senate Bill 6, a discriminatory and unnecessary bill that does nothing to address safety,” Texas Association of Business president Chris Wallace said in a statement.

Regardless of the North Carolina vote, the fate of the Texas “bathroom bill” — which has been approved by the state Senate — depends on the Texas House, where it’s unlikely to gain much traction. House Speaker Joe Straus opposes the legislation and has decried it as “manufactured and unnecessary.”

Straus has indicated the measure is headed to the State Affairs committee, whose chair, Republican state Rep. Byron Cook, has not been enthusiastic about the proposal.

Because it's unclear whether the measure will make it to the House floor, social conservative members of the House are instead focusing on offering up portions of the “bathroom bill” as amendments to other measures considered by the chamber. Straus earlier this week spiked such efforts during debate on a state agency review bill.