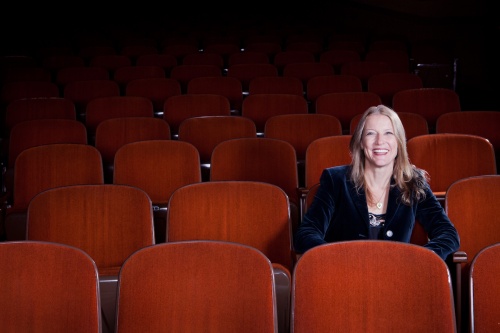 Barbara Morgan is the Austin Film Festival's director and founder.

We asked Barbara Morgan, director and founder of the Austin Film Festival, a few questions as she prepares to launch the 23rd year of the festival.

What inspired you to start a film festival in Austin?
When we started the AFF, the only other festival in Austin was the Austin Gay and Lesbian Film Festival.  There also wasn’t the incredible landscape of theaters we now have. We wanted to be able to show films we couldn’t get to see here and also show big Hollywood fare as well. I never imagined it would be more than a hobby, and I never planned to quit my day job, either. It was still a small town at that point, and there were a lot of people here who loved film. It just seemed like the right time to do a mainstream festival.

What makes this film festival different than other film festivals in Austin?
Austin Film Festival honors the writer. We are the first film festival to focus on the writer’s contribution to the film process. AFF is eight days, but during the first four days we also host a conference with 200 panels from the film, television and digital mediums with the most influential and renowned creators sharing their process with our registrants. We don’t have any VIP areas, so the panelists are directly engaged with the audience over the weekend. People share ideas and leave inspired and energized to go create themselves.

How has the Austin Film Festival changed over the years?
We have genuinely kept to our mission, so the changes are really an expansion of what we do already. We created a television show called 'ON STORY' out of the panels at the conference. The show now airs in over 88 percent of the PBS markets.  The ON STORY Project also consists of a video archive at Texas State University at the Wittliff Collections and a series of podcasts, which have about 1 million downloads at present, and last year we launched a radio show, which is distributed on public stations by Public Radio International.

Diversity is a focus of this year's festival. How are the films and the screenwriters diverse?
To help cultivate this initiative, AFF partnered with multiple organizations with parallel missions, including The Academy of Motion Pictures Arts and Sciences, The Writers Guild East, NBCUniversal Talent Infusion Programs, The Director’s List, Writers Guild of America and West Diversity Department. Thanks to these joint efforts, AFF is pleased to present a conference roster made up of approximately 40 percent women and 20 percent minorities, with almost 80 percent of panels featuring a diverse slate.

Furthermore, the program offers a number of panels that directly address inclusivity in the industry, such as 'How to be An Ally,' 'Culturevision & Niche Storytelling,' 'The Queens of Comedy,' 'Chicks with Bics' and 'Pushing Boundaries.'

This project is supported in part by the Cultural Arts Division of the City of Austin Economic Development Department and the Texas Commission on the Arts.

In addition, we’re proud to feature a film slate chock full of diverse voices, faces and viewpoints. Austin’s own Jeff Nichols will be kicking off the festival with the highly anticipated 'Loving,' based on the real-life courage and commitment of interracial couple Richard and Mildred Loving, who married and then spent the next nine years fighting for the right to live as a family in their hometown.

AFF is excited to feature and champion diverse voices behind the camera as well. Highlights include Izzy Chan’s documentary 'The Big Flip—Stories from the Modern Home Front' about families with reversed gender roles, Carlyn Hudson’s comedy 'The Big Spoon,' and Eva Vitija’s personal documentary 'My Life as a Film.'

Our screenplay competition made great strides toward these diversity efforts as well. Forty-four percent of finalist scripts included female writers; writers in international entries came from Australia, Canada, Denmark, Great Britain and Spain; and 48 percent of the industry judges and 60 percent of the readers for the competition were female.

How does a film get selected to be showcased at the Austin Film Festival?
We have a large team of screeners, and each film is watched at least twice. We have reached a point where we simply do not have enough slots to showcase all the great films we receive, and it is difficult each year to have to turn down films we loved.

What's the most challenging and the most rewarding part of directing a film festival?
This town has become very busy these days, and it is increasingly difficult to plan around other events, traffic, parking, et cetera. The growth is great, but it does present logistic challenges. It’s also more difficult getting information out to people as the landscape of communicating with local audiences has changed a lot. It is also frustrating to see so many creatives sparring with the expense of living here. When we started in 1993, it was a much more affordable place to live for everyone, but the creative culture here simply doesn’t have the same salary base as a lot of the new businesses which are moving to Austin, so it is difficult for them to focus on their respective crafts. The creative talent pool here is deep, and I would hate to see us lose some of that base of people. They are, in large part, what has drawn so many people to move here.

The most rewarding parts of directing AFF are being able to work with so many creative and talented people in the part of the industry in which we work. Writers are amazing to be around. They are smart and interesting and great storytellers, so the eight days of the festival are like being at camp. There is always something fun or inspiring to do, and I always end the festival energized and excited about moving forward … and doing it all again next year!  It’s also so rewarding to be able to work with the team of folks at Austin Film Festival and on our show, 'ON STORY.'  I am constantly amazed and inspired by them as well and feel lucky that this is actually a job. I truly look forward to working with them every day.

What are some of your favorite films showing in this year's festival?
'Quaker Oaths,' 'Diani & Devine Meet the Apocalypse,' 'Boys in the Trees,' 'Imperfections,' 'Edge of 17,' 'My Life As A Film,' 'Bleed for This.'

What's your favorite thing about Austin?
Austin is magnetic, and it dares you to fall in love with it. This is a town that encourages a maverick spirit and inspires entrepreneurism. It’s also an incredibly fun place to be.
SHARE THIS STORY