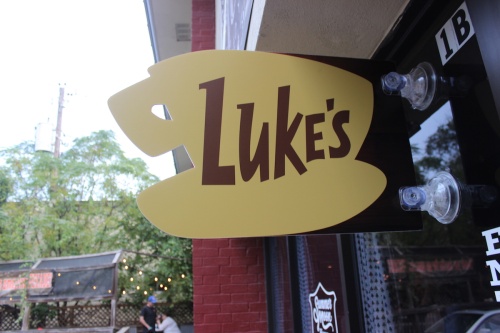 Summermoon Coffee Bar transformed its cafe into Luke's Diner for a day.

Four Austin coffee shops have been transformed into the fictional Luke's Diner from the television series "Gilmore Girls" in honor of the show's Netflix revival, which launches Nov. 25, and of the first episode's 16th anniversary.

Summermoon Coffee Bar, two of Caffe Medici's locations and Vintage Heart Coffee are among the more than 200 coffee shops across the US that have donned blue coffee sleeves, initiated loose "no cell phone" policies and given away free coffee courtesy of Netflix.

At Summermoon Coffee Bar on South First Street, the line wrapped around the building as customers waited for their free coffee and a chance to see owner Luke Danes in cardboard cutout form.

Similar events were held in other Texas cities, such as Plano.