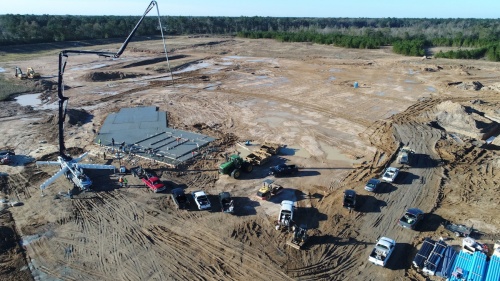 Big Rivers, which is expected to open for Memorial Day weekend, will feature attractions, such as slides, raft rides such as "Storm Surge," a wave pool, a splash pad and a lazy river. The site is located at the intersection of Hwys. 59 and 242.

Big Rivers will be one of the first phases of a 632-acre entertainment venue when it opens next summer along with Gator Bayou Adventure Park, Grand Texas CEO Monty Galland said. The two-year construction process on Grand Texas' namesake amusement park and sports complex is expected to begin when Big Rivers completes a successful season, Galland said. Construction on all the entertainment venues within the theme park is estimated to cost more than $2 billion, Galland said.

The waterpark is on track to open after overcoming several lending and construction-related setbacks, Galland said.

"This provides jobs for our teens and others to take them off the road instead of having to take jobs in Humble or other surrounding communities," McCrady said.