Excessive groundwater use from aquifers can lead to subsidence, or sinking of the earth, which can exacerbate the activity of fault lines. Fault lines criss-cross Montgomery County, including this one at the corner of Sgt. Ed. Holcomb Blvd. N. and Hwy. 105 in Conroe. (Eva Vigh, Community Impact Newspaper)

Editor’s note: This is part one of a three-part series examining groundwater use in Montgomery County.
Fifty miles southeast of Montgomery County lies the Baytown Nature Center—a marshy wetland that was once an upper-middle-class neighborhood. Known as the Brownwood subdivision, the community was created in 1937 by oil and gas executives, according to the nature center.

But after years of subsidence—or the gradual sinking of the earth—that led to widespread flooding, Brownwood residents abandoned their homes. Today, remnants of buildings can still be found among the grasses.

Brownwood is an extreme example of what can happen when subsidence goes unchecked, said Jace Houston, the general manager of the San Jacinto River Authority, an entity that provides surface water to the city of Conroe and other entities in Montgomery County. Subsidence has been occurring across Montgomery County for decades—with one gauge in Conroe measuring nearly 16 centimeters from 2005-20, according to data from the Harris-Galveston Subsidence District.

“I’m not trying to make the case that the sky’s falling and in five years we’re going to have abandoned neighborhoods here, but ... you can’t undo subsidence,” Houston said. “Once the ground sinks an inch, you can’t make it come back.”

Hydrologists widely agree excessive groundwater use from aquifers—or water-bearing underground rock layers—can lead to subsidence, which can cause flooding and infrastructure damage as well as exacerbate the activity of fault lines, or cracks in the earth.

Newly implemented groundwater rules and upcoming decisions pertaining to groundwater usage are highlighting this difference. In May, groundwater conservation districts within the region will consider new goals for the aquifers. And the LSGCD’s new groundwater usage regulations, which went into effect in September, abolish prior restrictions on groundwater pumpage—a move district officials said puts them in line with the law but some fear could deplete aquifers faster.

“The concern is now with the deregulation, ... [efforts to slow subsidence have] been undone,” said Mike Turco, the general manager of the HGSD.

To reduce the county’s reliance on groundwater, certain large-volume groundwater users in Montgomery County entered into an agreement with the SJRA in 2010 for the latter to provide surface water to certain entities beginning in 2015 using a $497 million surface water treatment plant on Lake Conroe and water pipe transmission system paid for by the entities. 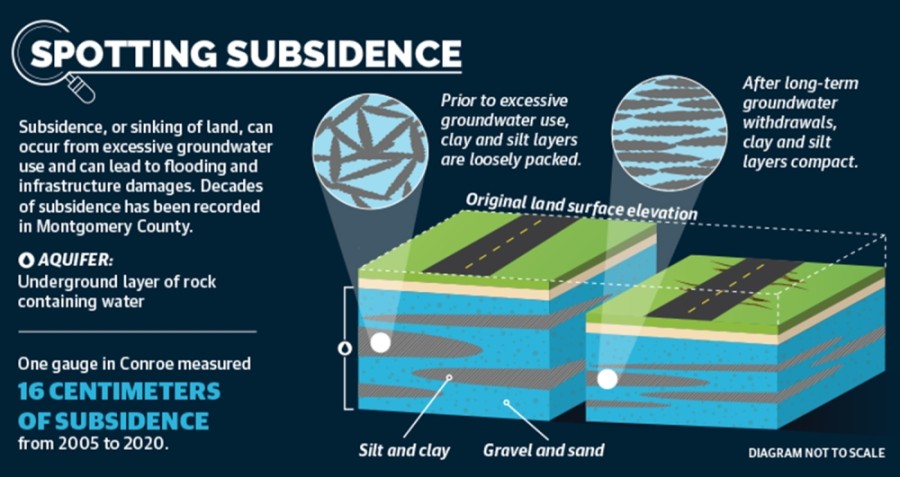 In 2016, large-volume groundwater users in Montgomery County were required to cut back their groundwater usage by 30% of their 2009 usage. Consequently, the subsidence rate has since decreased, Turco said. 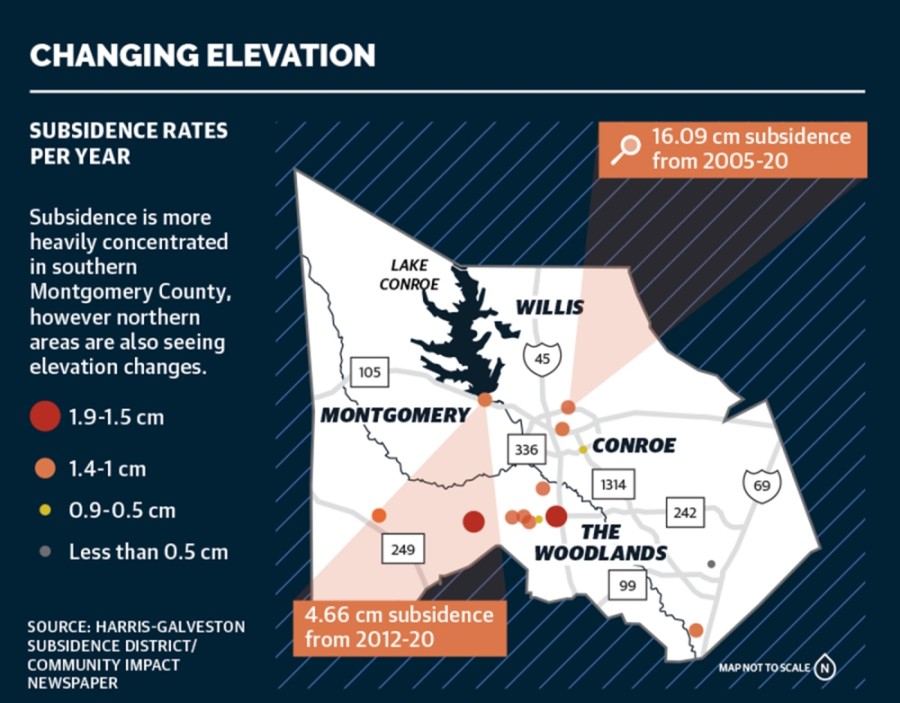 “In those areas where we’ve done some reasonable regulations to diversify [water sources], subsidence rates have been reduced or been eliminated,” Turco said.

Subsidence can exacerbate flooding conditions and increase the activity of fault lines, which can lead to infrastructure damage, according to a 2019 study by Southern Methodist University. Wade Oliver, senior hydrologist at Intera Geoscience and Engineering Solutions, discussed evidence of this correlation in the Greater Houston area at a Jan. 20 meeting of Groundwater Management Area 14. GMA 14 includes five groundwater conservation districts—including LSGCD—that manage the Gulf Coast Aquifer System.

“Even if the faults are naturally occurring, the movement of those faults can be accelerated due to groundwater production, drops in water levels and subsidence,” Oliver said.

Fault lines crisscross Montgomery County, including Big Barn, which runs through The Woodlands, and the Conroe Fault Line. The latter caused about $100,000 in damages to the Conroe Aquatic Center from about 2010-18, Conroe Recreation Manager Rob Hamilton said. 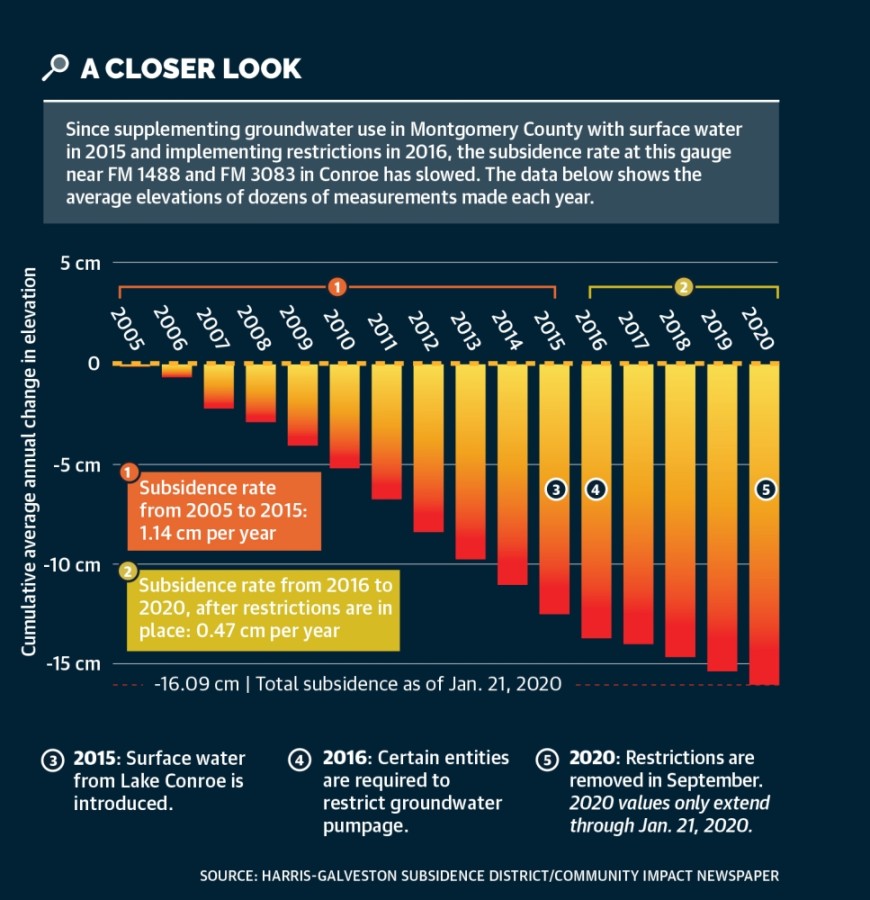 Several years after he was hired in 2004, Hamilton began to notice reoccurring cracks in the pool.

“The repairs were becoming an annual occurrence,” he said.

A new solution was needed. Last summer, the city opened a new aquatic center away from the fault line.

How groundwater should be regulated in Montgomery County is a topic of debate. Some are looking to the LSGCD to enact stricter groundwater regulations and prevent subsidence. Meanwhile, LSGCD officials said they are tasked with a balancing act: protecting groundwater while upholding private property rights—and these two are not mutually exclusive.

“The district’s job is to have clear, fair and impartial rules that strike the appropriate balance to groundwater management under the law so permit holders can conduct their own water planning in the manner they deem best to meet their needs,” LSGCD General Manager Samantha Reiter said.

In 2018, a judge declared the groundwater reduction rules for large volume users void and unenforceable. To comply with the judge’s ruling, LSGCD was required to adopt new rules and a new groundwater management plan.

A new LSGCD board—which was elected in 2018 thanks to state legislation, replacing the previous appointed board—adopted new rules in September that abolished the previous restrictions to comply with the final judgement. Per Texas Water Code Chapter 36, LSGCD’s new rules issue permits based on demand with an annual authorized limit, Reiter said. The new rules authorize the district to institute cutbacks if needed in the future.

"The changes were necessary to comply with current law,” she said.

But Houston, who previously served on LSGCD’s appointed board, said the district did not need to abolish its previous reduction rules and could have simply modified the rules, perhaps requiring entities to restrict usage to 70% of their current demand instead of 2009 demand. Further, the judge’s ruling stated there is “substantial ground for difference of opinion” and recommended an immediate appeal of the order.

The LSGCD board did appeal, however the appeal was dismissed because the parties reached a settlement agreement, according to Reiter. Reiter also said the legal issue behind the cutbacks was not the baseline amount—such as 2009 demand versus current demand—but that it was against large volume users.

Still, without the pumping cap, some worry aquifers will deplete faster.

However, not everyone is in favor of tightening pumping restrictions on groundwater— which is cheaper than surface water—particularly those who live in northern Montgomery County where subsidence is not as prevalent. Conroe City Council Member Duke Coon said at a Feb. 9 LSGCD meeting that subsidence in the south may be caused by pumping from Harris County. He suggested forming a management district in south Montgomery County in cooperation with Harris County to tackle the issue.

“One size does not fit all,” he said. “The city of Conroe cannot afford to have our pumping limited.”

Upcoming decisions at the regional level will also affect future groundwater use. The district is considering a new desired future condition, or DFC—a long-term goal for the aquifers—that will need to be voted on by GMA 14 districts in May for final adoption in January 2022.

LSGCD is considering three scenario options for its DFC. Subsidence was used as a modeling constraint in all three scenarios to see if there could be any potential concerns with various levels of pumping, and the model scenarios did not predict “unacceptable levels of subsidence,” officials said.

But Turco said the constraint—1 foot of subsidence on average across the county in the next 50 years—could mean some areas could experience up to 3 feet.

“I’m concerned about the potential impact of subsidence,” LSGCD President Harry Hardman said. “We are definitely spending time, effort and resources [into studying this].”

The SJRA board, however, is stepping out of the conversation surrounding subsidence. After trying to “wave this red flag” for years, Houston said he is tired of fighting. But the consequences still worry him.

“We’ve tried to warn people. I don’t know if anyone is listening to us,” he said. “You can’t just wait around 10 years and say, ‘Oh gosh, we sunk another foot.”