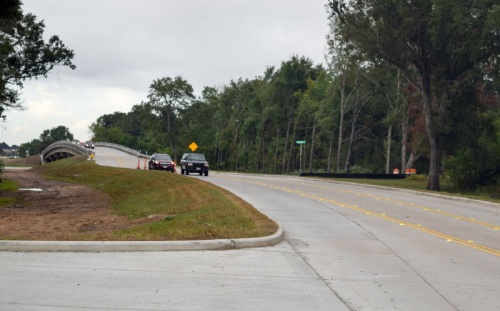 The roundabout, which opened Sept. 7, connects Spring Green Boulevard to Cinco Trace Drive and Katy Flewellen Road. According to Fort Bend County Engineer Stacy Slawinski, a single lane of the roundabout and the Spring Green north connector opened July 9. The roundabout project had an original completion date of July 2018, but Slawinski said that was delayed by changes in the contract and utility delays. Three lanes connect each road to the roundabout: The two left lanes enter the traffic circle while the far right lane is a right-turn-only lane for the next right turn leaving the traffic circle. County Judge Robert Hebert said the roundabout will make the intersection safer.

The project will improve the existing two-lane asphalt roadway to a four-lane divided concrete boulevard with underground stormwater drainage. The city of Katy is waiting for Fort Bend County to construct the Katy Flewellen Road at Gaston Road intersection before the city proceeds with the construction of Gaston Road from Katy Flewellen to Spring Green Boulevard, according to Slawinski.  A final tract for the right of way along Katy Flewellen has been acquired, Slawinski said. As of Aug. 23, Fort Bend County is coordinating the clearing of the new right of way, which will allow utility relocations to begin shortly after, Slawinski said. The schedule for completion is contingent on the relocation of private utilities.

The existing two-lane asphalt roadway on Crossover Road is being replaced. Work is ongoing between FM 1463 and 1,000 feet from the intersection with Spring Green Boulevard. Once finished, the road will be a four-lane boulevard with a storm drainage system incorporated, Slawinski said. A new traffic signal will be placed at the intersection of FM 1463 and Crossover Road.

This widening will expand a 1.6-mile stretch of Gaston Road from Greenbusch Road south of Katy Flewellen Road. The existing two-lane asphalt roadway will be reconstructed as a four-lane divided concrete road with underground stormwater drainage. According to Slawinski, as of Aug. 23 the contractor has started installing the storm drainage system. Slawinski said a temporary flagman will be present while materials are being delivered, so drivers should stay alert. This project concerns a two-lane road under construction that will connect Cane Island Parkway and FM 1463 just south of I-10 in Katy. The existing curve at FM 1463 will be replaced with a signalized intersection.  Slawinski said Cane Island Parkway opened to traffic Aug. 31, and the new signal at FM 1463 was set to be activated at the same time.  Construction work around the intersection was expected to continue through mid-September, and a ribbon cutting was scheduled for Sept. 17.

New northbound and southbound dual left-turn lanes will be installed at North Mason Road. The eastbound and westbound left turn lanes will be extended, and a traffic signal has been replaced and is operational as of July 26, according to Paul Hawkins, Harris County Precinct 3 Project Manager. As of Aug. 23, the work at the intersection was expected to be complete by Aug. 31.