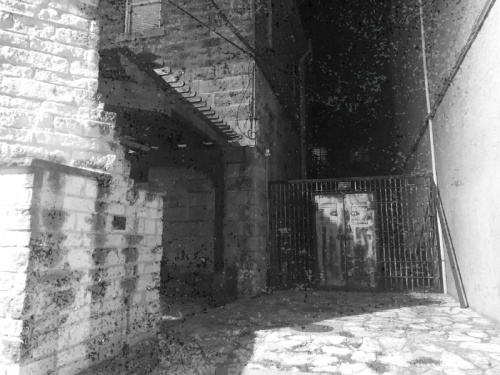 McKinney is home to many building with haunted tales.

October is the season for scary and ghostly stories. And McKinney, whose history goes back more than 170 years, has its share of haunted tales. Much of the following information comes from TexPart Paranormal, a local group of avid historians who research and attempt to validate claims of haunting through evidence. Other details come from property owners and residents and from stories passed down over the years. Whether you believe in ghosts or not, these stories are too spooky not to share. Here is a guide to some of the reportedly haunted places in McKinney. 109 ½ E. Virginia St.
Sixty years after the suicide of a local insurance agent, Leonard Ray’s name remains etched on the door of his former downtown McKinney office where he was found dead of a gunshot wound to the head in 1959. Shortly after, the entire top floor of the building, including his office, was boarded up and left dormant for almost 50 years. When the space reopened sometime in the past decade, several unexplained events have been reported, including the sound of footsteps and paint cans flying across the room. The top floor, now known as The Artist Lofts, is an art gallery and work space for artist Rachel Reitan Fine Art among other artists. Reitan was the first to occupy the space directly next to Ray’s office. When she said she was in the building alone with her dog, she felt an eerie energy. She said the hair on the back of her neck stood up, and her dog remained glued to her side with its hackles raised. Next, she said, loud footsteps came down the hallway. But when she looked, she said, there was no one there, and all the doors were still locked. She said she heard footsteps again. Local research team TexPart Paranormal conducted an investigation at Ray’s office a few years ago and asked aloud why Ray shot himself. A voice was captured saying, “She left me.” The team found out through Ray’s family that his wife and his business partner were having an affair; this is believed to be the reason for his suicide, according to TexPart. 4550 W. University Drive
The Buckner Cemetery, which sits on the land of what is now Third Monday Trade Days, is said to be haunted by the ghost of a Kiowa Indian chief. Chief Spotted Tail once led a 200-member tribe that watched over Fort Buckner and McKinney; he was believed to be a local hero. In the 1870s, the chief volunteered to bury people who died during an epidemic. After Chief Spotted Tail caught the disease himself, he reportedly asked for a “white man’s burial,” but back then, this was not allowed. Instead a tree was planted in his honor in the cemetery. A Texas Historical Marker at the cemetery states that the tribal chief was buried in an unmarked grave. Trade Days owner Darrell Lewis said shortly after he purchased the property in the 1990s, an Oklahoma-area Kiowa chief came to visit. According to Lewis, the chief said the area was “holy ground.” Over the years, there have been multiple reported sightings of a Native American man standing in and around the cemetery who disappears before anyone gets too close. Others have reported hearing voices.

100 N. Tennessee St.
Long before it was The Celt Irish Pub, a small wooden saloon stood in its place. The saloon was said to be popular among infamous criminals, including Frank and Jesse James, who were said to play cards and drink there. The bar’s owner at that time reportedly put in trap doors and secret exits so a quick getaway could be made when law enforcement arrived. It is believed that many shootouts took place in the area, and bullet holes can be found in the pub’s walls. In 2016, the owners of The Celt called in TexPart Paranormal to investigate why forks kept turning up in the furniture and woodwork. Before investigating, TexPart said it required all silverware to be locked up. During a review of its audio recordings, the sound of a young boy’s voice was caught saying, “I need a fork.” During the same investigation, TexPart said it recorded another faint voice—this one of a man saying, “Y’all are crazy”—and a little girl’s voice saying, “I hate dancing.” The sound of spurs jingling was also recorded. Others have reported multiple sightings of a male figure dressed in an overcoat and top hat as well as “creepy feelings” in the women’s bathroom.

300 E. Virginia St.
The Collin County History Museum is believed by some to be haunted by a man who worked there when the building was a post office in the early 1900s. During an investigation, TexPart Paranormal said it asked aloud, “Is there a former postmaster still here? How long did you work here?” Researchers said they recorded audio of a man identifying himself as “Walter” who said he has worked there for 38 years. TexPart said when reviewing records of former employees, researchers found a man named Walter who had worked there for 45 years, 38 of which he served as postmaster. 115 S. Kentucky St.
Residents and paranormal investigators both have reported unexplained activity inside the old Collin County Prison. The prison, built in 1880, could house as many as 50 people, according to the Collin County History website. The last man to be hanged there was William Ezell Stepp, who was sentenced to death after being convicted of the murder of Hardy Mills. Stepp reportedly professed his innocence until the day he died in 1922. The first two floors of the prison were later renovated into office space, but empty jail cells remain on the third floor. The sound of keys jingling and wooden chairs rolling across the floors were continuously reported by staff who worked after-hours in the building. TexPart investigated the building in 2017, and the team captured audio recordings of what they believe to be a former prisoner saying, “Show me where I killed her. Show me where I hid her.” Some believe the prison is haunted by Stepp as well as by prisoners whose spirits are still confined to their cells.

315 S. Chestnut St.
At least three homes in Chestnut Square are said to be haunted. The Delaney House, the Faires House and the Two-Bit Taylor Inn were relocated from their original locations to the Square. All three date back to the mid-1800s and come with deep history. People have reported hearing children’s voices, seeing apparitions and objects flying across the room and hearing the sound of running footsteps. Others have reported seeing a man resembling Mr. Taylor in the second-story window of the Taylor Inn during war reenactments and finding indentations on the beds as if someone had been lying in them. Every October for the last 12 years, Chestnut Square officials have held ghost tours. This year, on Oct. 25-26, guests can join investigators as they walk through some of the homes. Tickets are $20. Visit www.chestnutsquare.org/ghost-walk for more information.

111 N. Tennessee St.
Many different spirits are said to haunt the McKinney Performing Arts Center. The building served as the Collin County Courthouse from 1875 to about 1979, according to the city’s website. The most notable entity, called “The Lady in White,” is believed to be one of the two women who killed themselves at the courthouse. One drank poison on the front steps during the Great Depression, and the other is said to have hanged herself on the third floor. TexPart said it captured a video of an apparition resembling a lady in white walking down the staircase during one of its investigations. A chair was thrown at a researcher during another visit. Shadow figures and strange audio recordings have also been captured over the years.

708 S. College St.
This building, which has been operating as an office building for the last few decades, was once a dormitory for the nurses who worked at the hospital next door. Some people believe the nurses’ spirits continue to loom there. It’s been said, but not confirmed, that a nurse was strangled in the building’s basement by a maintenance man. There has been at least one report of a woman in the basement feeling hands wrapped around her neck. The encounter left visible marks, but no one was there. Others have reported feeling a negative presence in the basement and hearing footsteps throughout the halls. The sound of running water, believed to be from the dorm showers, can still be heard sometimes in the building. Former employee Lisa Barringer said her boss reported hearing water running so vividly in his office that he called a plumber. The plumber found that water pipes no longer ran through that part of the building, but he heard the water, too.