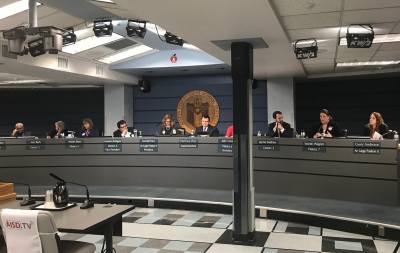 The Austin ISD board of trustees met Feb. 26.

At its meeting Feb. 26, Austin ISD board of trustees approved the appointment of two new principals and a new director of construction management and facilities with its consent agenda.
Eastside Memorial Early College High School
Miguel Garcia III, who has served as Eastside Memorial Early College High School’s interim principal since September 2017, was appointed as the school’s permanent principal by the board of trustees.

Garcia has a bachelor's degree in English from Texas State University-San Marcos and a master's degree in educational administration from Concordia University Texas, according to a district news release from Feb. 26.

Waugh has a bachelor's degree in psychology from South Dakota State University and a master's degree in counseling from Central Texas College, the news release states.

Cervi will oversee the planning, design and construction of the district's schools and educational support facilities, according to a news release by the district from Feb. 28. This includes projects associated with the district’s $1 billion bond program, which was approved by voters last November.

Cervi resigned as Round Rock ISD’s chief operating officer on Dec. 20, where he oversaw projects associated with that district’s 2014 bond program. Cervi had held the position since September 2015.

"With solid experience managing facilities and bond projects in Texas and Oklahoma, he understands the critical role facilities play in serving our schools and students," Chief Financial Officer Nicole Conley Johnson said in the release. "His experience and skills in team-building will be valuable to ensuring that there is alignment across departmental work and the service we provide to our school communities."