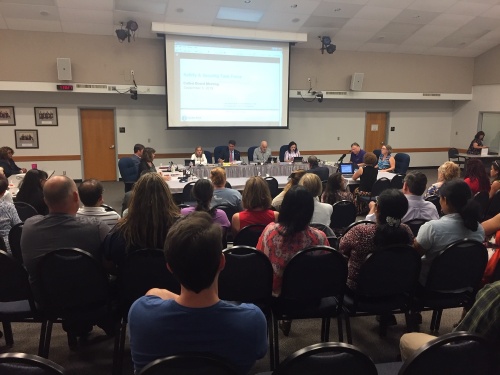 A task force presented options for district safety and security to the Round Rock ISD board of trustees Sept. 9.

A discussion on school safety simmered to a boil on Sept. 9 as parents and teachers spoke publicly about a recently-reported threat of violent against Pearson Ranch Middle School.

While ultimately deemed not credible by the Williamson County Sheriff’s department and Round Rock ISD, the threat—which was made by a student last week—highlighted gaps in coverage in the district’s school resource officer program.

“We demand someone in there to protect our children,” said Sheila Keiser, mother of a student at Pearson Ranch, to the board of trustees at a special-called meeting Monday night.

Keiser was one of 15 individuals signed up to speak at the meeting. Scheduled prior to the incident at Pearson Ranch, the issue nevertheless drove a portion of the meeting’s discussion on school safety.

A year and two months after being formed, a safety and security task force shared a six-hour presentation outlining options for safety in RRISD.

Formed at the behest of the board of trustees in July 2018, the task force comprises residents, parents and district staff. Trustees charged the group with developing three to five safety and security options for the district.

The charge is set against the backdrop of an impending change to a longstanding safety program in the district. Since the mid-1990s, Round Rock ISD has partnered with multiple law-enforcement agencies to provide school resource officers, or SROs, on middle school and high school campuses.

However, this arrangement will soon change. The Round Rock Police Department will withdraw its officers—which currently make up over half of the district’s SROs—from the school policing beat at the end of the 2020-21 school year.

In light of this, the board is searching for approaches to safety and security districtwide.

Several members of the task force, including co-chair Lisa Moore, touched on a range of topics Monday night, from the importance of prevention to behavioral health, physical safety and emotional safety.

“This task force considered all aspects of school safety on all RRISD campuses as we prepared options for the Round Rock ISD board of trustees,” Moore said. “Regardless of options selected, the task force has discussed the need for preventative measures and not only reactionary options.”

In regard to security strategies, the task force outlined three major categories the district could deploy:

Should the board elect this option, the Williamson County Sherriff’s Office would run the district’s SRO program, according to the Sept. 9 presentation.

A benefit of this model is that overhead and equipment costs would be minimized through a partnership with an existing law enforcement agency, task force member Karen Elliott said. Uniforms, vehicles, facilities and more would be readily available. In addition, current SROs have established relationships with campus students, staff, and administration, Elliott said.

Concerns include lack of oversight and accountability in addition to lack of input on hiring and staffing, Elliott said. Currently, out of 9 SROs, none are Black, one is Hispanic, and the remaining officers are White. Also, one officer is a woman and eight are men, according to the Sept. 9 presentation.

“The sheriff wants complete control over SRO programs on campus,” Elliott said. “Will he be open to additional training as recommended by the task force?”

Questions remain over jurisdictional issues, Elliott said. Some of the district’s campuses are in Travis County, outside of a Williamson County officer’s jurisdiction.

“Round Rock ISD may be unable to hold accountable any SROs who are not in alignment with the goals and values of the school district, making the relationship unmanageable,” Moore said.

Should the board elect this option, all campuses would be streamlined under a single jurisdiction with unified safety and security policies.

The task force proposed a 52-member department which would include a chief of police, assistant chief, sergeants, detectives, patrol officers, SROs, dispatchers, support staff and more. Benefits to this model include control of hiring, training and campus assignment for officers, task force member Tracy Armstrong said.

“Round Rock ISD could have the ability to assure district goals and values are upheld as well as be directly responsible for accountability within the agency,” Moore said.

Concerns include startup costs and capital expenditures are projected to be higher than using outside law enforcement, Armstrong said.

“There are considerable policy and financial considerations that will have to be undertaken in order to efficiently, successfully, and equitably create and manage a district police agency,” Moore said.

Questions remain about scheduling, including summer and overnight coverage.

Should the board elect this option, it would open up safety and security considerations outside of or in addition to law enforcement.

According to the presentation, some of the elements could include:

“Safety and security is not just about policing," Trustee Cory Vessa said. "What we’re talking about here is more than just police officers.”