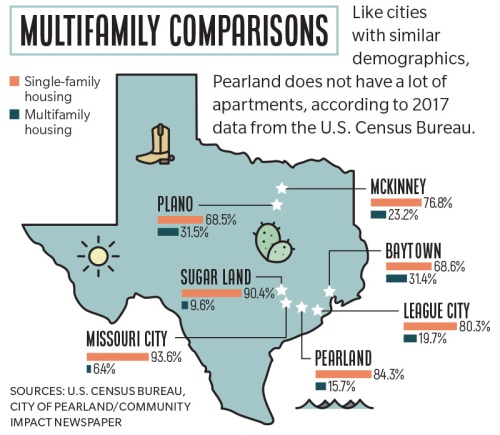 As Pearland’s space for residential real estate wanes, the land left in the city becomes more precious. As space for larger planned developments lessens, apartments and duplexes are all possibilities—provided they fit the look and feel of the city.

“I think it depends on where the future goes, but it is all about the right product and the right development,” Community Development Director John McDonald said.

The city of Pearland does not have many apartment complexes compared to surrounding cities, such as League City, as less than 16% of the city’s residential real estate is multifamily real estate. Many of the complexes it does have are in the Shadow Creek planned development and slated to be built out soon. The city does not know when it will reach complete residential buildout though.

“Our focus is on single-family housing. It would have to be a very special project for multifamily,” McDonald said.

For a planned development, the developer would have to go in front of City Council and the planning and zoning commission to get a development approved.

“I think we just have to go back to our comprehensive plan. What do we want to go where?” McDonald said.

Because the developments have to fit the city, Pearland’s multifamily developments are intentional and include developments such as senior housing or provide luxury living to the citizens.

While building apartments in Pearland could be waning for the time being, senior-living complexes continue to crop up. As the population of Pearland ages, senior citizens want a place to live where they still maintain their independence. The new—and often luxury—complexes allow seniors their independence and their own space but also have memory care on-site.

Larkspur at Shadow Creek Ranch, an active-living community for those 55 or older, will offer seniors a place to live and will help set up memory care if they need it, but focuses on keeping seniors comfortable and active, said Noah Drever, managing partner at Drever Capital Management, which manages the Larkspur communities.

“What our residents are looking for are activities,” Drever said. “These people are doing these programs with their friends.”

A question on seniors’ minds is affordability. For Drever, this means striking a balance between affordable and appealing.

“We are trying to solve the affordability crisis plaguing seniors today. We want to build something where people like living,” he said. “We want to make an affordable option that seniors can achieve.”

Larkspur at Shadow Creek Ranch is opening in Pearland in 2020. Although Pearland does not have a lot of mixed-use developments, it could be an option as available land in the city decreases, provided it fits the “feel” of the city, McDonald said. There are plans for both the Midtown at Magnolia District and the Ivy District, which would combine residential and commercial areas or commercial and industrial areas, respectively.

There could be financial perks for the city welcoming multifamily developments. Five of the top-10 taxpayers in the city are multifamily units with the top being Pearland Town Center.

Though multifamily units contribute money to the city, there still needs to be a plan of where they could go, McDonald said.

“I think it is all about the right product and the right development,” McDonald said. “Just throwing another apartment complex in the middle of the field doesn’t do anything.”

Mixed-use developments also allow the possibility of walkable space. With the beautification on Hwy. 35, the city is building more walkable areas, especially in the east side of Pearland.

“More people are thinking it would be nice to walk somewhere, and we have places where that is possible,” McDonald said. Many of the apartments are in the west side of the city, off Shadow Creek Parkway or Hwy. 288. That area is a good corridor in to the Texas Medical Center as well, according to Apartment Data Services President Bruce McClenny.

However, there is growth in the east side of the city as well. This area could support duplexes or townhomes that more fit the atmosphere of the older side of town, McDonald said.

“I wasn’t optimistic at first, and then I realized there are a lot of young families,” Slater said.

As Hwy. 288 provided a corridor for those working in the Texas Medical Center to live, townhomes interest young families and nurses—those who want to be in a nice area with a low-maintenance home, Slater said.

Despite being Class A and B apartments, the median rent in Pearland is lower than rent in both Missouri City and Sugar Land, which are close to $1,400 a month to $1,600 a month, respectively. Meanwhile, Pearland’s average rent is $1,272, which is only slightly higher than the rent in League City.