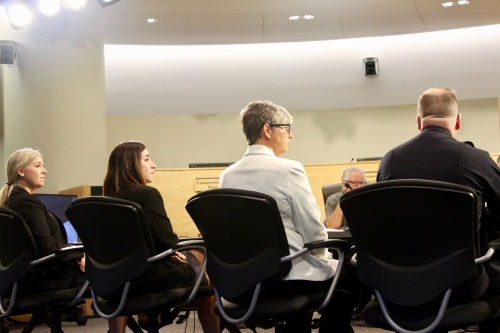 Twenty-three people signed up to testify about aspects of Travis County's FY 2018-19 budget during a public hearing on Aug. 9

Travis County held a public hearing Thursday and the first of two workshops this week on its preliminary fiscal year 2018-19 budget. Estimated at $1.07 billion, the budget draft is a 3.2 percent increase over the county's current budget for FY 2017-18.

Although the proposed tax rate—35.27 cents per $100 of taxable value—will be a reduction of 1.63 cents per $100 of taxable value compared to last year’s tax rate, the total taxable property value in the county will increase from the current $171 billion to $189 billion next year. New property value—value that has not previously been on the tax rolls—is estimated at $4.7 billion.

The property tax rate used in the preliminary budget is 3.37 percent over the effective tax rate. This represents a 2.39 percent increase for the average taxable homestead, meaning residents could see, on average, a $27 increase in the county’s portion of property taxes, or around $2.24 per month.

“As we prepare next year’s budget, the Commissioners Court wants to hear directly from the taxpayers who are footing the bill,” said Travis County Judge Sarah Eckhardt. “As stewards of the County’s resources, we take into consideration our region’s growth and needs, while being mindful of the tax burden being placed on our residents.”

"[There is a] critical need for a new women's unit to replace the existing building," said Diana Claitor, director of the Texas Jail Project. "This new women's jail will be designed specifically with women's needs in mind and will be trauma-informed, safe, healthy and rehabilitative."

The FY 2018-19 budget includes $6.6 million for design and pre-construction of a new female facility at the Travis County Correctional Complex. The project would be the first phase of implementing the Travis County Adult Correctional System Needs Analysis and Master Plan. The new female facility would relocate women inmates from older facilities that cannot meet their medical and mental health needs, Claitor said.

After Commissioners Court has reviewed the recommended draft budget and weighed input from taxpayers and county staff, the final budget will be voted on for approval September 25. Fiscal year 2018-19 begins Oct. 1.
How to participate
The public is invited to submit comments about the FY 2019 budget by sending an email to [email protected].

Two public hearings on the proposed tax rate have also been scheduled for mid-September.