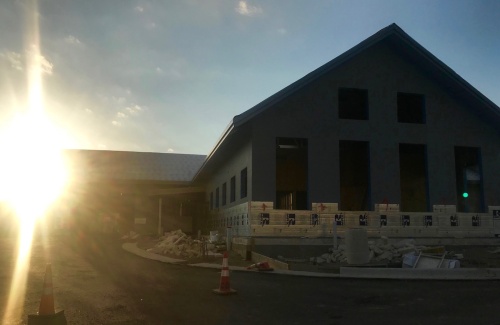 The sun sets Aug. 7 behind the new Sunset Valley city facility. The project is about halfway complete.

During its first August meeting, Sunset Valley City Council received an update on the city's ongoing facilities project and approved a new outdoor lighting ordinance to reduce light pollution and trespass.
City facility construction update
City Administrator Clay Collins said the city is now seven months into Sunset Valley Police and Public Works Facility construction, which is anticipated to take 14 months total. As of the end of July, 56 percent of the approved project budget had been spent and an updated schedule could be available in the next few weeks, he said.

In terms of milestones, stonework is being put up at the public works building. Roofing was delivered Tuesday for both buildings and is ready to be installed, he said.

The City Council on Tuesday approved the payment of $17,579 to Austin Energy for the installation of new electrical service and equipment for the facility.

November election update
As of Tuesday evening, Mayor Rose Cardona and Mayor Pro Tem Ketan Kharod had both filed to run for mayor in the upcoming election in November, Collins said. Interested residents have until Aug. 20 to file to run in the election, which also has two council seats up for grabs.

Ordinance to regulate light pollution
After taking some steps to limit light pollution by revising the city’s land development code in June, the council on Tuesday approved an ordinance for additional lighting regulations to stop local light trespass and glare.

Parks and Natural Resource Manager Carolyn Meredith said based off a drive through the city, she found 10-15 homes would likely be in violation of the new rules, which will go into effect in January 2019. The majority of those lights could be in compliance if reoriented or if a lighting shield was purchased, she said.

Ultimately, the ordinance is complaint-driven and will allow residents to report if a neighbor’s light is disturbing their property, she said.

According to the ordinance, if an outdoor lighting fixture is within 50 feet of the home's front setback, the fixture's bulb should not be visible from the property line. For lights on the side or rear of a home, unwanted light should not cross onto another property.

If replacing a noncompliant light fixture, the city offers a rebate that will cover 50 percent of the first $75 of the cost, including installation. Residents can apply for rebates on each of the first four fixtures they replace.