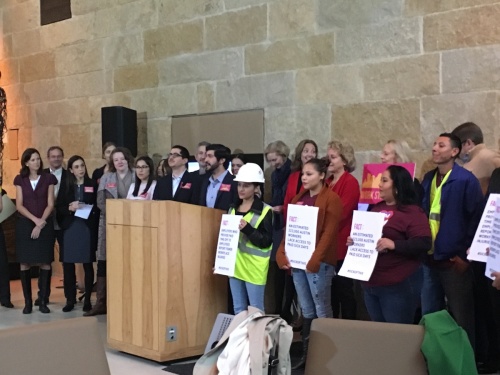 On Monday, District 6 Council Member Jimmy Flannigan proposed an alternate proposal, which would establish tiers of sick day accrual according to the size of the business. Businesses with five or fewer employees would be able to offer unpaid sick leave and be in compliance with Flannigan’s proposal, if it is passed in place of Casar's.

Community Impact Newspaper spoke to a variety of stakeholders—including business owners, a policy advocate and an employee—on both sides of the issue. Their stories are below.
Adam Orman, co-owner, L'Oca d'Oro
When the owners at L’Oca d’Oro, a new Italian restaurant in East Austin, learned of a legislative push within the city for private employers to provide paid sick leave, they wanted to get ahead of the game, Orman said.

So in fall 2017, the locally owned business began offering paid sick leave—a maximum of five days per year—to its 25 employees.

In the four months since implementing the policy, however, Orman said the business has only paid out one sick day and has been able to track accruals without the need for a new payroll software.

Ultimately, for Orman, the decision to offer paid sick leave was simple, he said.

“That race to the bottom is not something we want to be a part of,” he said of the pushback to the policy. “If you can’t do [these] things for the people who are making you money, then I question whether you should be running a business.”

Since then, he and his partner have offered quarterly bonuses to their 12 employees in 10 of the 12 quarters they’ve been in business, he said.

If Austin City Council approves a paid sick leave policy, Chapa will likely have to dock some of his employees’ benefits to cover the associated costs, he said.

“We like that our employees have to show that they’re sick,” such that they need to provide a doctor’s note to earn a paid day off, Chapa said.

In the past, his business has dealt with employees who have taken advantage of paid sick days, which led to an internal policy change to prevent this “abuse.”

Unless a paid sick leave ordinance can address these concerns—Chapa said neither Casar nor Flannigan’s proposals do to his satisfaction—he will remain “totally against this policy.”

Jen Ramos, bartender, The Iron Cactus
Jen Ramos works as a bartender on Sixth Street in downtown Austin. As a tipped worker, she earns $2.13 an hour and does not qualify for minimum wage, which is $7.25 an hour in Texas.

Recently, she has worked through strep throat and the flu. Her employer requires tipped workers to find a replacement if they need to miss work because of illness. Ramos said, however, that she knows of many co-workers who have worked while ill because they cannot afford to lose pay.

“It means a payment, rent, your utilities bill, groceries,” she said.

Additionally, the cost of health care discourages many workers from seeking treatment.

“It almost gets to the point where you don’t go to the doctor because then you have to pay for the appointment,” she said.

Ramos has been a vocal supporter of Casar’s paid sick leave ordinance.

“Have you noticed all the iconic local businesses that went out of business last year because of [rising] property taxes?” asked Will Newton, executive director of the National Federation of Independent Businesses Texas office.

“This ordinance says that the Austin City Council wants every business to be a big box store, and they don’t want any local, small business involved in the economy of Austin ever again,” Newton said.

The NFIB takes issue with any type of paid sick leave policy, which Newton said represents an unacceptable interference of government in privately-owned business operations.

“This ordinance, even Council Member Flannigan’s ordinance, is a one-size-fits-all [policy],” Newton said. “If it’s wrong at one level, it’s wrong on all levels.”

The NFIB is a nonprofit organization that represents small-business policy across the country. Past tax records indicate the NFIB receives the majority of its funding from Freedom Partners, a conservative economic policy group whose board is dominated by Koch Industries-affiliated members.

Regardless of whether the Austin City Council approves a paid sick leave policy on Thursday, NFIB will pursue state legislation to prevent municipalities from enacting their own policies on the matter.

“We can’t have different employee regulations across the state of Texas,” Newton said. “We need consistency.”