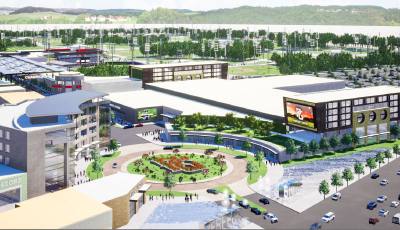 “From day one Hutto felt like home,” Ford said. “We’re from Iowa, and we immediately connected with the small-town vibe here, the charm.”

Founded in 1995, Perfect Game is the largest baseball showcase organization in the nation. The company hosts tournaments in the United States, Canada, Europe and Puerto Rico.

“Out of 48 states and 2,800 communities, we came out on top,” Hutto City Manager Odis Jones said. “This is a big deal for not only Hutto but for the region and the state.”


A mix of uses

Perfect Game will become the anchor tenant in a large, mixed-use development slated for Hwy. 79 and CR 132, adjacent to Fritz Park.

Sports-related amenities in the development include 24 turf baseball fields, 10 of which the city will develop for public use, Jones said. Multipurpose sports fields and other recreational opportunities are in the works as well.

Hutto’s first indoor sports arena and event center could break ground within the development as early as June, Jones said. According to the April 18 presentation, the approximately 300,000-square-foot arena will seat 13,000 people.

“The indoor arena and convention hotel will be used for concerts, conventions and family entertainment,” Jones said. “Hopefully it’ll be used for graduation ceremonies and other events like that in the future.”

Some 200,500 square feet of the development is earmarked for entertainment, retail and restaurants. Plans indicate 134,000 square feet of office space, multifamily living space, up to four hotels and a community center.

Parking totals 3,231 spaces, according to the plans presented April 18.

The project is expected to pump $200 million annually into the local community, according to Perfect Game.

“Perfect Game is a game-changer in terms of diversifying our tax base, in particular, our tourism, hotel and convention business,” Jones said.

Perfect Game will lease the space from the city of Hutto, according to a 30-year contract signed April 18. Property taxes are expected to be $5.1 million annually, according to the city. Yearly sales tax totals are estimated to be $1.5 million.

The city stated plans April 18 to reinvest 60% of ad valorem taxes back into the project for 30 years through a tax increment reinvestment zone, or TIRZ. The TIRZ will help offset the cost of public infrastructure, which includes fields, roads, utilities and garages.

The city stands to generate additional revenue from gate entry fees. Other sources of revenue tied to the development include hotel room occupancy taxes, local sponsorships and a hotel rebate program.

An $800 million private investment makes this project the largest economic development deal in the history of Hutto, Jones said. It is a partnership among the city of Hutto, Perfect Game, developer Wolverine Interests LLC, Sports Facilities Advisory and Sports Facilities Management.

Perfect Game’s decision to locate in Hutto is “one of the most significant events in the sports tourism industry in the last 20 years,” according to Dev Pathik, founder and CEO of Sports Facilities Advisory, a sports and entertainment center management consultant company.

“Perfect Game is the No. 1 youth sports opportunity in America today,” Pathik said. “It provides a platform for the best youth talent to gain exposure to scouts.”

“Youth sports tourism is the fastest-growing segment of the travel industry,” he said.

Youth sports tourism accounts for $11.4 billion annually, according to a 2017 report by the National Association of Sports Commission, a nonprofit sports and events tourism trade association. The industry is growing at 9% year over year, per the report.

The opening tournament is expected to be held no later than Memorial Day 2021. All fields, sports amenities and the arena are anticipated to be complete by the end of May 2021 as well.

“Sports are a unifier,” Pathik said. “Hutto is going to grow either way—with or without Perfect Game. There’s something about growth in an environment that exists alongside sports. Perfect Game will help Hutto grow and keep that community feel everyone is looking for.”
SHARE THIS STORY