Traffic consistently rates among Gilbert residents’ top concerns, but town officials said they are ready to make important forays into intelligent traffic systems to address it.

The town recently received a $2.35 million grant from the Maricopa Association of Governments, which serves as a regional planning body, to implement advanced traffic detection systems, which will work in conjunction with two other projects to read and react to traffic.

Town Manager Patrick Banger said once new equipment from the projects is installed over the next year, residents could soon see improvements in flow as they make their commutes in town.

The projects are part of the town’s City of the Future initiative to avert problems with aging infrastructure as the town approaches build-out in about 2030. An intersection study for the town in 2018 showed traffic growing 1%-1.5% annually through 2040.

“You get to a point where you can’t put more pavement down; you can’t add more lanes,” Public Works Director Jessica Marlow said. “The technology comes in to make the infrastructure that we do have more efficient.”

The town is investing in technology because build-out is looming and traffic is growing, officials said. The National Citizen Survey revealed Gilbert residents felt less positively about traffic flow, falling from 71% in 2017 to 63% in 2019.

“Traffic congestion and traffic issues are the single biggest issue where people want to see some sizeable investments by the town,” Banger said. “People want to live here, and now they want to work here and eat here. And our transportation systems are shouldering that burden.”

A City of the Future tenet

Over the past two years, Gilbert has worked to define City of the Future, which town officials said aims to break the typical life cycle of a city to maintain prosperity as the population and infrastructure age. Maintaining safe roads and transportation is a tenet of a focus area on having an exceptionally built environment. 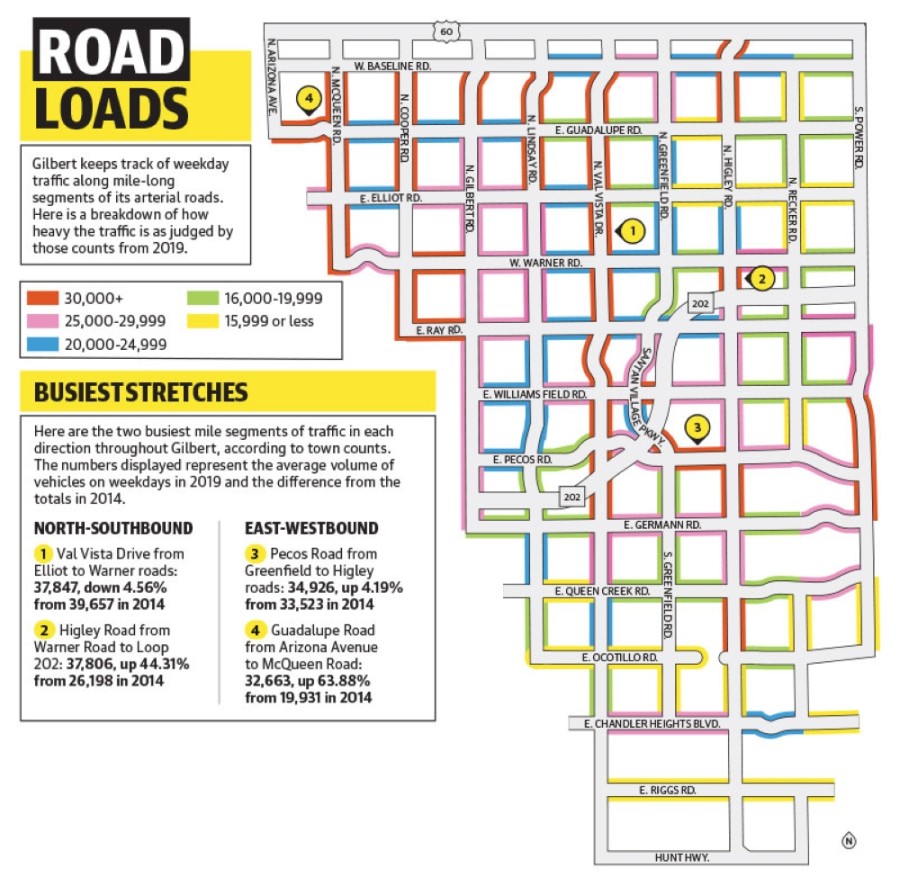 To Banger, the three projects are first stakes in the ground for City of the Future’s transportation components. He said the technology, along with the growth in autonomous vehicles, could one day bring about “frictionless travel” perhaps without traffic signals.

With that overarching goal in mind, the push to improve traffic flow comes in the three interconnected projects to be put in place in the coming months.

The $2.35 million advanced detection systems project will be put in place at intersections where the systems could reduce crashes with injury or improve operations, according to town documents.

The systems are an improvement from the traffic cameras found at many intersections, which can read traffic to know if, for example, a left-turn arrow is needed on a light change. The new systems give finer data in real time, such as lane-by-lane data at an intersection or vehicle tracking that starts farther back from the intersection, potentially extending a green light, intelligent traffic systems engineer Mike Sutton said.

The second project—actually a series of projects over the next few years—involves fiber-optic infrastructure installation and replacement along arterial roads in town. Some of it will be privately owned and operated but will expand the town’s fiber network at no cost to the town. The first 3 miles should be completed by summer 2021.

The fiber network has benefits to the town beyond traffic, but in the context of traffic technology, it is the communications piece, Marlow said.

It will relay data from cameras and adaptations back to traffic signals in real time, she said.

Smart signal controls are the third project, coming at a cost of $5.66 million. But the installation timeline is uncertain as the town waits to see how they work in pilot programs outside town.

“The [adaptive] signal in essence makes its own decisions, but the fiber will allow us to keep tabs on it and see what it’s doing,” traffic engineer Aaron Pinkerton said. “Signals that have gone in test locations so far have not proved sufficient to give us comfort to say, ‘here you go, signal, make your decisions.’”

The town uses some technology in traffic control, starting with traffic cameras at intersections. It also can get traffic counts from cellphone devices that are connected to Wi-Fi or Bluetooth as motorists pass an intersection, Town Engineer David Fabiano said.

Those things have helped the town as it has made decisions on signal timing or where road construction is necessary. The coming technology will build on that, Marlow said.

Marlow said safety is always the priority in making mobility decisions. She used the example of signal-light extension to avoid red-light running as a point where safety is improved.

“[The driver] may be too far out to make it through before the light turns red, but we know they’re probably going to try to run through it anyways,” she said. “They extended the green, so that they don’t end up in that yellow trap.”

Fabiano cautions it may take some time for Gilbert drivers to see the benefits, but they are coming.

“Some things have been in place for a while,” he said. “Some of the more, I’m going to say Buck Rogers-sounding ones are things we’re now working to deploy hardware. And then once hardware is deployed, you have to start [calibrating] it ... so that you can make them more effective at taking care of traffic.”