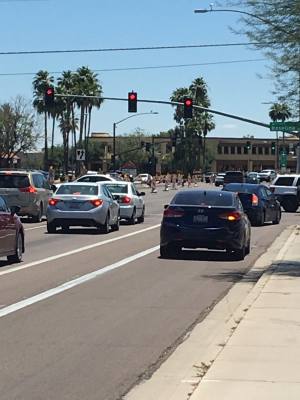 Traffic will be shifted to east side of Gilbert Road on May 28 as the road improvements on the road from Guadalupe to Baseline continue, according to Gilbert officials.

Southbound Gilbert Road from Baseline Road to just south of the traffic signal entry to the Fry’s Plaza will be reduced to one lane southbound to accommodate work in the middle of the roadway.

In addition, during this work access will not be permitted into the Fry’s Plaza at the Gilbert Road traffic signal. However, the remaining Gilbert Road driveways will be available as will entrances on Baseline Road.

Officials anticipate the area will be paved back late the week of June 10, so that the signalized driveway can be reopened and southbound Gilbert Road can once again accommodate two lanes of travel during construction.

Other driveways will be ramped to provide access to businesses, However, though usually only one driveway will be accessible during this work so that the contractor can begin rebuilding the subsurface of the roadway to prepare for paving.

As this process crosses driveways, there will be periods where the driveway will be inaccessible for a short time until it can be ramped for use.

Crews recently completed work on Gilbert Road on the north end of the project to construct the middle of the roadway from approximately the Fry’s Plaza entry to Baseline Road and two lanes northbound were restored last week.

New raised median islands and pavement markings will also be installed to provide additional safety by limiting left-turn movements near one another.

The town anticipates the project, which began in November, to be completed for fall 2019. The town funded the $8.2 million project.

Voters will see a Chandler USD maintenance and operations budget override on the Nov. 2 ballot

The goal of Kids in Focus is to encourage children to reach their potential using photography to ignite their imagination and build their sense of confidence and value.

Gilbert Sister Cities is holding a competition to choose a young artist to design and help paint a wall mural at the organization’s Friendship Garden under development at Gilbert Regional Park.