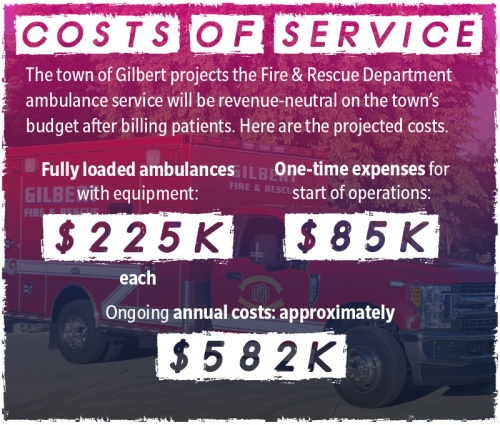 The town of Gilbert projects the Fire & Rescue Department ambulance service will be revenue-neutral on the townu2019s budget after billing patients. Here are the projected costs.

Sometime in November, Gilbert Fire Station No. 3 will add a new vehicle to its inventory: Medic 253.

That vehicle will be unlike any housed at the other fire stations. It is an ambulance, the first to be used in Gilbert as a line of service for the Gilbert Fire and Rescue Department.

“I look at this as an insurance policy,” Assistant Fire Chief Bob Badgett said. “When we [moved to provide ambulance service], there was some upheaval and turmoil in the private sector at the time, and we felt that this was too critical of a line of service to not be prepared.”

The town had not looked to provide ambulance service before, but now that it is, Badgett said he is excited.

“This is a pretty big day for Gilbert residents, for Gilbert Fire, the town,” he said. “It’s just a service that we need to make sure that we can provide.”

If bringing the service online is exciting, making the decision to go this route was not, as Mayor Jenn Daniels made clear.

“None of us on the council have ever desired to get into the ambulance business,” she said. “I think that’s an important component of this conversation. But we do want the very best service for our residents. These are life-and-death situations, in some cases, and we want our absolute best top-quality service.”

Officials said the decision to offer the service came because the ambulance business was volatile earlier in the decade. Rural Metro Fire Department formerly provided the service to much of Maricopa County, including Gilbert, but the Scottsdale-based business struggled financially. In 2013, it filed for Chapter 11 bankruptcy, and in 2015, AMR purchased it.

During fiscal year 2015-16, Gilbert Fire and Rescue moved to obtain a “Certificate of Necessity,” a state Department of Health Services requirement for the town to provide ambulance services. The department finally got its CON last year, Badgett said.

Duty said Tempe initially put two units into service, has added two more since and has plans to expand eventually to six ambulances. AMR provides private ambulance service in Tempe, and Duty said the city still has an excellent relationship with the company.

Gilbert then elected, with council’s blessing, to put the service into action as a means of protecting the line of service and the investment into it.

“Especially when it comes to safety,” Daniels said, “when there is a gap in our system or in our network, we want to be able to be proactive, or if we are anticipating a gap, we want to be proactive about that. I’m not sure there’s a gap today, but I do believe that if we didn’t act, we would be facing a gap in our [emergency] services in the town.”

The town anticipates the annual costs of providing the service, estimated at approximately $582,000, will be covered through patient billing, making the service revenue-neutral, Badgett said.

Though emergency units work on a closest-available basis, Gilbert chose to house the ambulance at Fire Station 3, 1011 E. Guadalupe Road, Gilbert, because it is the second-most densely populated response area in Gilbert and, over a three-year period, that area had the greatest number of emergency medical calls in town.

The town has two ambulances, with a backup kept for times when the first ambulance is out of service for maintenance or repair, Badgett said.

The relationship between the town and AMR has remained intact, Badgett said. A CON holder can object to a CON application from another entity under Department of Health Services rules, but AMR did not stand in Gilbert’s way.

“We’re working in partnership with AMR now,” he said. “This is allowing us to just protect the CON, using it, but also learn the business. We’re building the model to be scalable, so if anything ever did happen, we’re ready. But right now, AMR is serving us very well.”

Residents won’t see much, if any, change in billing because the Department of Health Services regulates rates. The only big difference may be how services are broken out on a bill.

The people staffing ambulance service positions will be civilians, and they will work among the sworn firefighters in Station 3. Each ambulance unit will have one emergency medical technician and one paramedic on board working 24-hour shifts, much like firefighters do, Badgett said.

“We want to emphasize that to our citizens that these civilian medics and paramedics have exactly the same level of medical training as they’re getting from fire [department] and the private [companies’ personnel],” he said. “It’s a national registry test that everybody must pass, so there is no reduction in care or increase. It is one-to-one across the board.”

“It was very important for me to come back into my community and be able to offer my knowledge that I’ve learned in the ambulance transportation business,” she said.