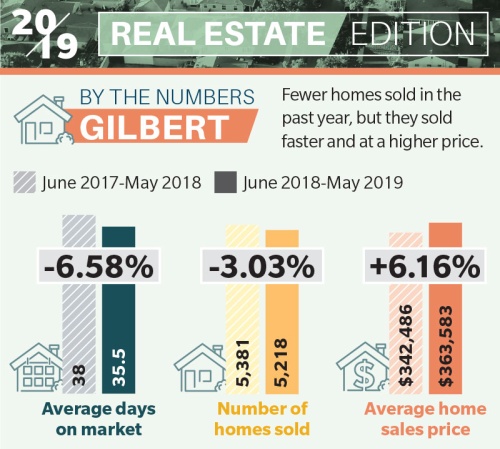 Fewer homes sold in the past year, but they sold faster and at a higher price.

With its family-friendly feel, its reputation for safety, and its access to amenities and freeways, Gilbert remains attractive to homebuyers, according to real estate professionals.

But they caution that with a relatively low inventory of homes available, the town stays a seller’s market.

That means prices are expected to continue ticking up for now; however, the situation is not without hope for buyers.

Realtor Dylan Phillips said he sees the market as more balanced now, even if it leans toward being a seller’s market, which has advantages for both sides of a transaction.

Low inventory has made it tough for first-time buyers, Phillips said. That inventory was hovering at about 560 homes in the last week of June for single-family homes, which were priced between $240,000 and $2.5 million. A handful were in age-restricted communities, according to Multiple Listing Service data, meaning the residents had to be at least 55 years of age.

But when Realtor Deb Jennings ran the data for homes between $300,000 and $400,000—a popular price point around the median value in Gilbert—the inventory dropped to 188 homes.

One reason for the low inventory is that homeowners are holding on to their homes longer, the real estate pros say. Part of that is a hangover from the Great Recession in 2007-09, when a housing bubble burst and home values plummeted.

“Most people now, even if they bought at the height of the market, can get out of their home with a little bit of equity,” Phillips said. “Some people stayed in their home and kind of rode out that wave versus jumping out and selling at a low, low price.”

Another hangover effect is that home shoppers frequently express concerns about the homes being overpriced, but Realtor P.J. Selby said she thinks the prices are reasonable.

“I don’t see that we are going to outprice ourselves in the market because the appraisers are very cautious in doing their appraisals and pricing the homes,” she said. “And we have good agents in the market that are advising their clients not to overprice the homes because we surely don’t want to be in the situation we were last time [in the recession].”

The seller’s market in Gilbert is one of four local real estate trends to know in the summer of 2019. Here are the others.

Making the most of small lots

While residential building in Gilbert has recovered from the recession, permit data shows it no longer is as explosive as it was before the downturn. And developers are no longer buying and building on huge tracts of land.

“If they can get 10 acres, they’ll take 10 acres, which used to be unheard of,” Jennings said.

Making the most of those 10 acres is pushing another trend toward smaller lots sizes.

“We have people coming in from the Midwest and the East, and they are very surprised at the fact that the yards are not very large,” Selby said.

The real estate professionals said they are finding that trend is OK with the buyers, many of whom do not want to put the effort into maintenance.

“When we got to these super low interest rates, these mega houses evolved, where you get these 4,000- or 5,000-square-foot houses for a family of four,” Jennings said. “Then people realize they have to cool it; they have to clean it; and they’re not quite so happy anymore.”

The amenities that people want, such as a clubhouse, a playground or a grassy area, now are more often found in common areas of the community.

“It’s a great way for people to be able to get out, but then you don’t have to maintain that,” Phillips said.

That extends to a staple of Arizona housing in past decades: the swimming pool. The size of many of the lots is inhospitable to a pool or at best can accommodate a “spool”—a small swimming pool—the Realtors said.

Jennings points to the high cost of maintenance of pools that can be shed from the homeowner.

“I’ve never seen a green community pool, so they keep them really nice,” she said. “The only drawback to it is you don’t have any privacy. If you don’t feel like you look good in your bathing suit, you’re not going to want to go out there.”

The old maxims of home buying still apply, according to the real estate professionals. Kitchens still are important, as is a good paint job. A home with “good bones” is worth putting your money into.

What is newer is a greater emphasis on energy efficiency, particularly in a market like Gilbert with a younger demographic. The town’s average age, according to the U.S. Census, is 33.6 years.

“[Younger buyers are] conservative with water,” Jennings said of today’s buyers. “They don’t want to mow. They don’t want to have wastewater. They’re having all this artificial turf put in if they’re doing anything.”

Efficiency practices extend to the interior and construction, as well.

“It goes as far as the material they’re using under the roofing,” Selby said. “And to some of, not only the appliances, but also as the importance of the air [conditioning] in the house.”

Technology also is a head turner, Jennings said, whether the buyer is a millennial or a baby boomer. Technology can, for example, control alarms, lights, the TV, the thermostat or allow the homeowner to see who is at the door, all with a cell phone.

“That’s really hot,” she said. “Everybody really wants that. And the builders have caught up to that. So I see that a lot when I’m taking people around. I see a lot of oohs and ahs when I see that technology.”

Gilbert’s hottest areas trend to the south and the east parts of town, according to the real estate professionals—areas where inventory is higher due to new construction.

Selby said south of the Loop 202-SanTan Freeway between Power Road and Val Vista Drive is the area that she sees as the hottest. And for good reason, she said.

“You [have] the [SanTan Village] mall in the area,” she said. “You’ve got some really great family-friendly entertainment and eating establishments. It seems to have brought in, to be honest with you, the younger crowd. … There’s freeway accessibility to get pretty much anywhere they want to in the Valley very easily within a timely manner. Everything they need is pretty much within half a mile to a mile of their homes.”

Also on the east side but north of the 202 is Morrison Ranch, which Jennings said people “love, love, love” and still is building.

Toward the south, she said, the large parks under construction, Desert Sky and Gilbert Regional, are a value add that people like.

There are people who still would like older homes with larger lots, particularly closer to the town’s Heritage District. That does have builders looking at small infill projects in the area, Selby said.

“There’s just not a lot available,” Jennings said. “Prices are really going up there.”

The Realtors suggest people need to be ready to move fast once they decide it is time to get in the market.

“You can find a wonderful home in Gilbert, Arizona,” Phillips said “It’s just a matter of being proactive and being ready to jump when those homes hit the market.”