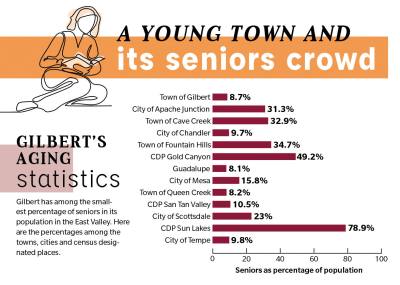 Gilbert has among the smallest percentage of seniors in its population in the East Valley. Here are the percentages among the towns, cities and census designated places.

Gilbert’s senior housing market is exploding as the number of seniors in town rapidly grows.

From 2010-17, the number of seniors in Gilbert grew 90 percent at a time when the town’s growth was 19 percent, according to the American Community Survey of the U.S. Census Bureau. In fact, those 65 and older made up more than a quarter of the town’s added population in that time frame.

A sign of that growth comes from five senior living communities that have opened in the past two years. In addition, two are set to open in the fall with another in the early stages of construction, and three more moving toward breaking ground.

That is a marked difference from a few years ago, when to town officials’ memories, there were few options for senior housing.

“For the longest time here, we didn’t have much senior housing at all,” Development Services Director Kyle Mieras said. “You know, we had Trilogy [at Power Ranch], which was a 55-and-older community, but we didn’t have any truly what I would call senior housing options until probably the last four or five years.”

Company officials in the senior living industry cite the desirability of Gilbert as a reason to build there, with its safety and access to health care.

There is still available land, too, zoned to allow for “congregate care,” which allows for separate housing with shared common spaces, such as kitchens, town officials said.

That gives families here options to consider if having parents and grandparents close to them is a priority, including an appropriate facility for the seniors’ needs at a price point that works for the family, people working with seniors said.

Gilbert might not seem like a logical choice in the East Valley for such an influx when considering the demographics. Only nearby Queen Creek and tiny Guadalupe have seniors as a smaller percentage of their population than Gilbert, according to the U.S. Census Bureau. The town’s median age is young, too, at 33.6 years.

The fact that it is a young town makes this growth spurt a little mystifying to senior advocate Elaine Poker-Yount, who serves as community liaison for outreach and education and care management team director for Visiting Angels East Valley. The agency provides nonmedical in-home care to seniors throughout the region and often helps with transition into senior housing.

But Poker-Yount, a Gilbert resident, has some theories.

“You have amazing quality of life here,” she said. “And there’s a safety about [Gilbert].”

Marsha Turner, the executive director of Eternal Spring of Gilbert, agrees with that assessment but said the businesses have bought in for reasons beyond that.

“Everyone’s done their feasibility studies, and the need is there,” Turner said. “It may not be as immediate as everybody would like, but they can see what’s the future.”

“It’s one of those things you know is going to come eventually,” he said. “We were lacking in that area.”

“The space in [Phoenix] is getting limited, and to put up a community there, you need a lot of land,” she said. “A lot of land is generally not available, but … you have the land out here.”

The town, for its part, was prepared for that. Mieras said senior housing “absolutely” always has been looked at as part of the town’s general plan.

If a developer is looking to build an age-restricted apartment complex, it only needs multifamily zoning, according to interim Planning Division Manager Catherine Lorbeer. Other zoning designations also may allow for that if a use permit is obtained.

However, many newer communities offer several differing living situations depending on residents’ care needs. In those cases, Lorbeer said the developer may build in areas designated for congregate care.

Zones that allow for congregate care often are close to the town’s hospitals and areas with high concentrations of health care specialists, Lorbeer said.

That can be attractive to a senior community like Eternal Spring of Gilbert, Turner said.

“I like that we’re nestled in the neighborhood, but we’re close by to SanTan doctors, the hospital,” said Turner, whose community at Williams Field and Lindsay roads is about five minutes from Mercy Gilbert. “Everything is really close by.”

Another advantage for congregate care is that it allows for some limited commercial services on-site that are exclusive for the residents, like hair care or a small gift shop, Lorbeer said.

Turner said the communities have evolved from simpler offerings in earlier years.

“People used to just go and kind of be warehoused,” she said. “I think now we truly look at the person and that they are still a human being.”

Turner said families shopping for a place for parents will find prices are competitive, so then it becomes more of finding the right fit.

That still can be a challenge, according to Poker-Yount. Families need to assess whether a senior can live independently or needs some level of care.

When families know a senior needs assisted living, it can be difficult to discern what level of care is needed, and each community may classify what is a low level, medium level or high level of care differently, she said.

However, Poker-Yount finds advantages for seniors who make the move.

More than 3.4 million Arizonans have receieved at least one dose of the COVID-19 vaccine, according to ADHS.

The efforts are specifically aimed at helping homeless, young and elderly people who are at increased risk from the heat.

Here are three businesses that will open soon in Gilbert.

Here is what you need to know about Gilbert's residential real estate market from April 2021.

The town of Gilbert is holding its final group discussion on inclusivity at 10:30 a.m. June 5.

The Arizona Department of Health Services announced June 3 that state-run vaccination sites will be phased out by the end of June.