Gilbert soon will embark on changes to its recycling program aimed at keeping the service financially viable as the market for recycled goods falls, town officials said.

The changes are twofold: simplifying what is collected and raising the environmental services fee on utility bills, both residential and commercial.

Staff said the town could begin a townwide pilot program with fewer recycled products as soon as May—a response to what the recycling market values and limiting the items taken to just those things. The fee increase, which likely would not happen until next spring, is being studied for a possible recommendation to Town Council at year’s end, staff said.

Both actions are being taken to keep the town’s environmental services enterprise funds from falling below the town’s minimum fund balances of $4.1 million for the residential fund and $600,000 for the commercial fund, Budget Director Kelly Pfost said. The town formerly made up to $500,000 annually from recycling but now is losing about $1 million, she said.

“It’s definitely a service our residents are passionate about,” Public Works Director Jessica Marlow said. “They recycle. Our participation rate is very high, so we know that they want to be responsible and do the right thing. By making these modifications, we’re just doing our best to balance the environmental responsibility with the financial responsibility.”
RELATED STORIES

• Gilbert to take second look at options along Western Canal

At the root of the problem of recycling costs is the global recycling market, Environmental Services Manager Paul Montes said. China was the largest buyer of recycled goods, but in 2018 it started mandating how much contamination it would accept in recycled goods it was buying. In recycling, contamination is material that is either not recyclable or has not been properly cleaned.

Montes said the items collected for recycling had as much as 25%-50% contaminants, but China dropped what it would accept to 0.05%, which had a dramatic effect on the market. China stopped accepting imported recycled goods altogether Jan. 1.

“It really left everyone scrambling,” Montes said. “Where are they going to take their recycling material?”

Local buyers still purchased paper for a while, but when they stopped doing so, paper no longer had a market of buyers willing to take it, Marlow said. Thus, paper has become cheaper to go the landfill than to process for recycling.

In response, Gilbert made cost-containment efforts on its end, Montes said, such as making collection routes more efficient. Another effort was to better educate residents on what items the town would take, said Kelli Collins, environmental services programs and sustainability superintendent.

As those efforts proved to not be enough to stop the declining fund balances, the town ran a pilot program last fall in three neighborhoods—Morrison Ranch, Higley Groves and Cooley Station. In that program, the town asked residents to only recycle items for which there is still a viable market, Montes said.

The only items recycled in the program were cardboard, aluminum, tin, and Nos. 1 and 2 plastics, which include milk jugs, water bottles, shampoo and detergent bottles.

However, that leaves a lot of common plastics out, such as clamshell containers that takeout food is often packaged in, containers for items such as yogurt or cottage cheese, and squeeze bottles for condiments. Those all fall into plastic Nos. 3-7, for which there is little market, Collins said.

“We see a lot of that, which is why the simplification of the program will be so helpful,” she said. “If you say you’re only taking, you know, these four things, it’s less open to interpretation.”

Council directed staff at its financial retreat in February to expand the pilot program to run throughout the town. It could start as soon as May 1, Collins said, with Gilbert’s digital team creating a campaign to educate residents first.

“We’d really like to have a lot of our groundwork laid and our foundation so that residents have plenty of time to absorb it, get used to it, have a few weeks to make a few mistakes before we go live,” Collins said. 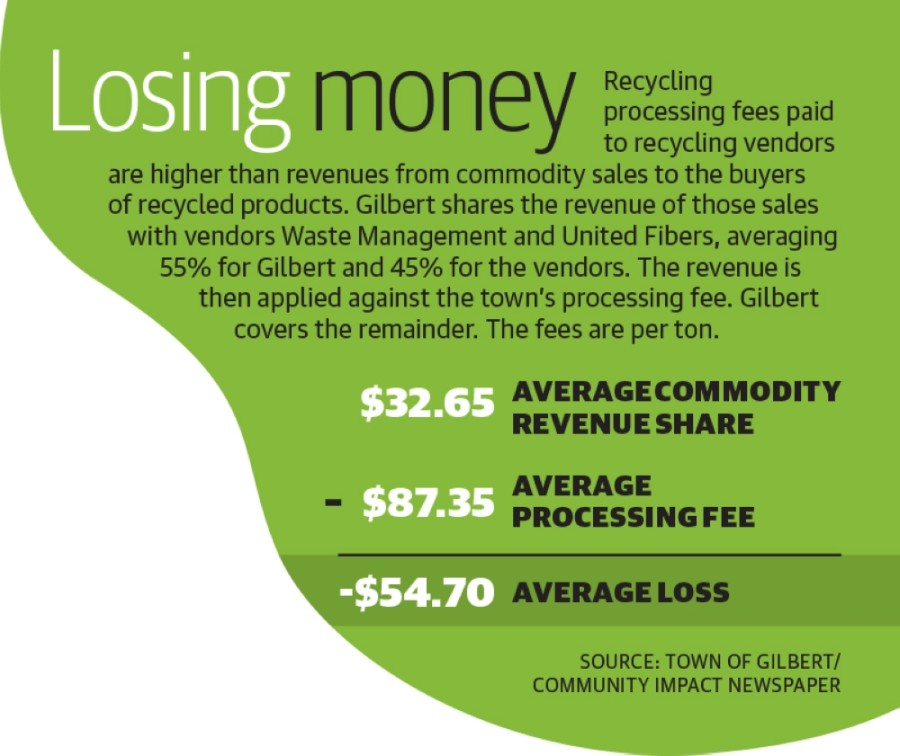 With processing fees rising and revenues falling with the markets, the town’s environmental services funds, which cover recycling and trash collection, are moving toward falling below the minimum fund balance and even below zero in future years as the costs for providing the service surpass the revenues from it, Pfost said.

“We’ve come to a point where the cost of services increase, and we need to be able to balance our revenue and expenditure to keep providing a service,” Pfost said.

In an effort to delay a fee increase a few months at a time when the town is facing similar shortages in other funds, council came up with a plan to use some Coronavirus Aid, Relief and Economic Security Act dollars to bridge the gap as the environmental services enterprise fund goes under its minimum balance, Pfost said. About $2.5 million would be used to bridge the gap in residential environmental services and $200,000 in commercial.

Council did approve moving ahead with a rate study, which will look at how much money is needed and how that will be distributed over the services provided, she said.

Staff plans to present a notice to increase rates with council in December, which starts the public process, Pfost said. Any increase would start in April 2022.

Marlow estimated the increase could be something like $4 or $4.50 from the $14.80 currently paid on Gilbert utility bills, but the study will show the actual increase. Commercial rates are on a sliding scale.