With praise for his character and service, the Gilbert Town Council accepted Eddie Cook’s resignation Feb. 18 and mapped out how the council member’s seat will be filled.

Cook, who was appointed Feb. 14 as Maricopa County assessor, will be replaced by appointment for the rest of this year, but his seat will come open for election in August to fill the remainder of his term.

The election is mandated by state law because the timing of Cook’s resignation, which comes more than 30 days from the April 6 deadline to file nominating petitions.

However, Mayor Jenn Daniels outlined the difficulty for a person to qualify to run for Cook’s seat. Anyone seeking the seat would have to collect the minimum 1,000 qualified signatures on the nominating petition by the April 6 deadline, which Daniels noted is a short time frame to gather that many signatures.
RELATED STORIES

Coronavirus updates in Gilbert for March 24-26

Furthermore, the people who have filed statements of interest for the two, four-year term seats held by Scott Anderson and Jared Taylor cannot run for Cook’s two-year seat without giving up their quest for a four-year seat. If a potential candidate does that, the signatures they have accumulated thus far toward getting a four-year term nomination would not be able to be used for the two-year seat petitions.

Anderson is running for re-election to his seat. Taylor has decided not to run. Other candidates for the four-year seats are Kathy Tilque, Gilbert Chamber of Commerce president and CEO; Tyler Hudgins, Heritage District Redevelopment Commission chair; and political newcomers Busola Abayomi and Monique Keberlein.

As for the appointment, Daniels said the town will open the application period Feb. 20 and begin advertising the opening. Residents have until 4 p.m. March 4 to file their application, which would consist of filling out the personal information from a Town Board and Commission application, a resume and a statement of 250 words or fewer on why they wish to serve on council and why they should be chosen.

On March 5, council members will rank the applicants, then meet in executive session to choose which six applicants will be interviewed for the position. Two alternate candidates also will be chosen.

The council will interview each of the six applicants in a public meeting March 17. The applicants all will be asked the same six questions. The applicants will be requested to not be present for each other’s interviews and will not be allowed to carry an electronic device on them when they are interviewed.

When the interviews are complete, the council will meet in executive session to discuss the applicants. They may return thereafter for a special council meeting to entertain a motion to appoint one of the applicants.

If Ray and Peterson are successful in gathering enough signatures by April 6 to run for their respective offices, they would have to resign their seats, as mandated by state law.

However, because their resignations would come at the filing deadline, their vacancies would be filled by appointment for the remainder of their terms. No election for their seats would be held.

Daniels said it would be important for the council to use the same appointment protocol to fill those potential vacancies as with Cook’s vacancy. She did say applicants should file an additional statement just to clarify if they were seeking appointment to Cook’s 10-month vacancy or to fill the remaining 2 1/2-year terms of Peterson and Ray.

One contingency the council discussed was if no one got enough signatures in the remaining time to get on the ballot for Cook’s seat. Town Clerk Lisa Maxwell said a candidate could run a write-in campaign, but that candidate would have to file some nominating paperwork and get at least 1,000 write-in votes to win election.

Before the discussion took place, the council accepted Cook’s resignation by a 6-1 vote. The dissenting vote came from Ray, who grinned widely while telling Cook and the council that he was just being a man of his word and living up to having once told Cook he would vote against his resignation “if he ever chose to jump ship.”

Ray then praised Cook, as did each council member in turn, with his work against domestic violence and on water issues receiving special note. A resolution honoring Cook passed on a 6-0 vote.

“He's a man of hobbies and interests and has always made time for that in addition to being completely devoted to his family and faith and to this community,” Daniels said. “I'm grateful for the incredible example he's been in all of those areas.

“Eddie really was the individual who brought the “one team” culture ideas to the community. And from the time that we got started on council, he was very vocal about the fact that we all need to be moving in a unified direction. And he's been one of those unifying forces for us as a council.”

Cook said voting to hire Patrick Banger as town manager was his greatest vote and praised Banger for unifying the city organization and bringing best business practices from the corporate world to the municipal government.

As for his own time, he said it was more important to be faithful to the call to serve than to be successful at it.

“It’s just been a great joy,” Cook said. “I had a lot of fun. Thank you all for allowing me to do this.”

In other business, the council approved on a 5-2 vote rezoning a 14.88-acre lot at the northeast corner of Quartz and Melrose streets from regional commercial zoning to multifamily-medium density so that an apartment project called Acero Val Vista could be built.

The lot is near Campo Verde High School and Quartz Elementary School.

Two written public comments were received against the move expressing reservations about area congestion and traffic. Daniels agreed, saying she appreciated high-quality projects coming into town but felt this one was not appropriate for the area.

The governor issued an order March 30 for Arizonans to stay at home.

Gov. Doug Ducey announced the state will shelter in place due to COVID-19.

The Banner Health Foundation is collecting donated medical supplies and personal protective equipment in partnership with Project C.U.R.E. in Tempe.

Here are the latest coronavirus updates for Gilbert residents.

Gov. Doug Ducey and State Superintendent of Public Instruction Kathy Hoffman announced March 29 that the state is closing schools through the end of the school year because of continued coronavirus concerns.

John and Sam Bongiorno, along with Sam's father Ed Cancro, have made Bongiorno Bagels into a shop that works for their family.

The town of Gilbert announced March 27 that it is closing the amenities in its public parks, plus all of Gilbert Regional Park, because of the coronavirus situation.

Coronavirus updates in Gilbert for March 27-29

Here is what Gilbert residents need to know right now about the coronavirus outbreak. 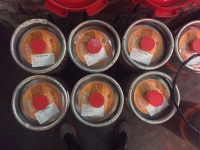 The Gilbert Town Council on March 24 approved converting part of the struggling Shoppes at Gilbert Commons to apartments.