Higley USD looks to bond as chance to move forward

Looking to shore up its financial situation and plan for future growth, Higley USD has placed a $95 million capital bond on the November ballot.

The proposed bond measure would fund transportation and major facility maintenance. It also includes $15.5 million to keep up the district’s commitment for a 1:1 student to technological device ratio plus fund additional safety and security measures.

It addresses future growth with $2.5 million to buy land for a future school and $27 million for major projects, such as building more classrooms at existing schools.

But the biggest item is $32 million to pay off one of the two leases on the district’s two middle schools, Cooley and Sossaman.

The 40-year lease-purchase agreements used to build the middle schools in Gilbert and Queen Creek have been a burden to the district, officials said, and removing one will save taxpayers money and strengthen the district’s financial picture. The schools opened in 2013.

But recent news linked to the leases could prove to be a challenge in passing the bond. Former district Superintendent Denise Birdwell was indicted in July on 18 felony counts related to the lease deals. Birdwell left the district in 2016, and no one involved at the time remains at the district.

“We are not the sins of the people before us,” said Dawn Foley, who took over as superintendent July 1. “I hope that people understand that we’re trying to right the wrongs of the past here and do what’s best for what we’ve learned are the needs of Higley with an amazing team of individuals who are putting their heart and soul into doing the best we can for Higley.”

The $95 million represents most of the district’s $129 million in available bond capacity, officials said, but as assessed property values in the district go up, the available capacity will recover in the next few years in case another bond is needed.

Out from under the leases

Tyler Moore, Higley USD’s new chief financial officer, helped put together the bond package that the governing board approved on June 9 for the November ballot.

He said when he and Jeff Gadd, who served last year as interim CFO, joined the district, they immediately identified the leases as a bad deal for Higley.

“In our network of school business officials, we were aware of this lease,” he said. “Actually, Higley was an example of what not to do. I knew going in when I started here that this was a big financial burden for this district. I was not aware of the details until looking deeper into it.”

The district pays about $4.4 million per year on the leases, Moore said, while the state’s allotment to Higley in “District Additional Assistance,” a formula to fund districts’ capital needs, is about $6 million annually when funded fully. Higley’s capital needs extended well beyond the leases, Moore and Foley said.

Complicating that picture, in the wake of the Great Recession, the Legislature stopped fully funding District Additional Assistance before finally restoring it completely this legislative session.

In the fiscal year 2021-22 budget, the district is carrying forward a large surplus in the capital because of stimulus payments and will be able to reduce the transfer from the M&O budget. Nonetheless, the bond’s passage would allow the district to pay off one lease, cut the future lease payments in half and save taxpayers $21.7 million over the years, Moore said.

The district opted not to include paying off both leases with this bond measure because it would not have left enough money to cover some of the district’s other needs. And choosing a larger bond amount would have taken up more of the district’s available bond capacity and increased property taxes much higher for longer.

“We do not feel that the voters would have confidence in that,” Moore said. “Nor do we think that an appropriate ask of the district.”

Instead, the district plans to wait until bond capacity recovers to pay off the second lease at a future date, Moore said.

“We’re grateful that we have those options for our students,” Foley said of the two middle schools. “That’s important. But being able to sustain it and fund it appropriately is also important.”

Even without the leases, Foley and Moore acknowledge the district’s capital needs reach beyond what is allotted from the state.

For example, district vehicles traveled 587,884 miles last year with a fleet that averages 11 years old. Thus the district is asking for $3.5 million to update the fleet and meet new safety requirements.

Likewise, Arizona’s desert environment takes a toll on roofs and HVAC units, Moore said. The district is asking for $11 million for its maintenance program, including upgrades for energy efficiency.

Higley USD, unlike some of its neighboring districts, is still growing in enrollment. The district has conducted demographic studies to anticipate growth, Moore said.

“Obviously our district is being built out,” he said. “The farmlands are being purchased left and right. And potentially, the district may need another site mostly in the northern part of our district.”

That has led the district to ask for money for a land purchase but also for a major building project to upgrade and build facilities. The district has indexed the maintenance of its buildings to assess its needs, Moore said.

The final ask is for $15.5 million for technology, safety and security. The district’s 1:1 technology initiative is a major part of that.

“It’s essential,” Foley said. “As we’ve evolved here, curriculum and resources involve devices, and [students] have got to have them. And they need to be updated, and you have to have the infrastructure and the internet and the connectivity to ensure that they work and that they’re maintained regularly.”

Getting the bond passed

By law, the district cannot use resources to campaign for the bond’s passage, but it can be a conduit of information on what is being asked.

The district has scheduled a “road show” with three one-hour informational sessions at different district sites in September. It may add a fourth session in October, with ballots being mailed out that month.

Advocating for the bond’s passage is a group called the Higley Political Action Committee, which also has supported for past district bonds and overrides on the ballot.

“We love the fact that we’re planning for the future,” said Ben Harrison, a former district employee who has been chairman of the PAC for the past three years. “We love the fact that Higley as the entity is really thinking about the safety and security of our kids and thinking about technology. But another huge piece is paying off the one of the middle schools in order to get us from out under that huge debt that we are [in]. We think it’s going to transform the flexibility of our finances with Higley for years to come.”

Harrison noted all the construction along Williams Field Road that will bring more students into the district and said planning for the growth is vital.

No group has yet been identified as opposing the bond, though Harrison said he anticipates one might come forward sometime after Labor Day if past experience holds form.

But Harrison said if anyone believes trust has been broken, they should look at Higley in this new day and how officials act now to promote transparency and accountability.

“[Leadership has said] ‘Look, everything we have is available to take a look at,’” Harrison said. “’We want to be that shining star in the community, and we’re going to do everything we can to prove that.’ I think the bond we’re looking at this year is another piece of that messaging.” 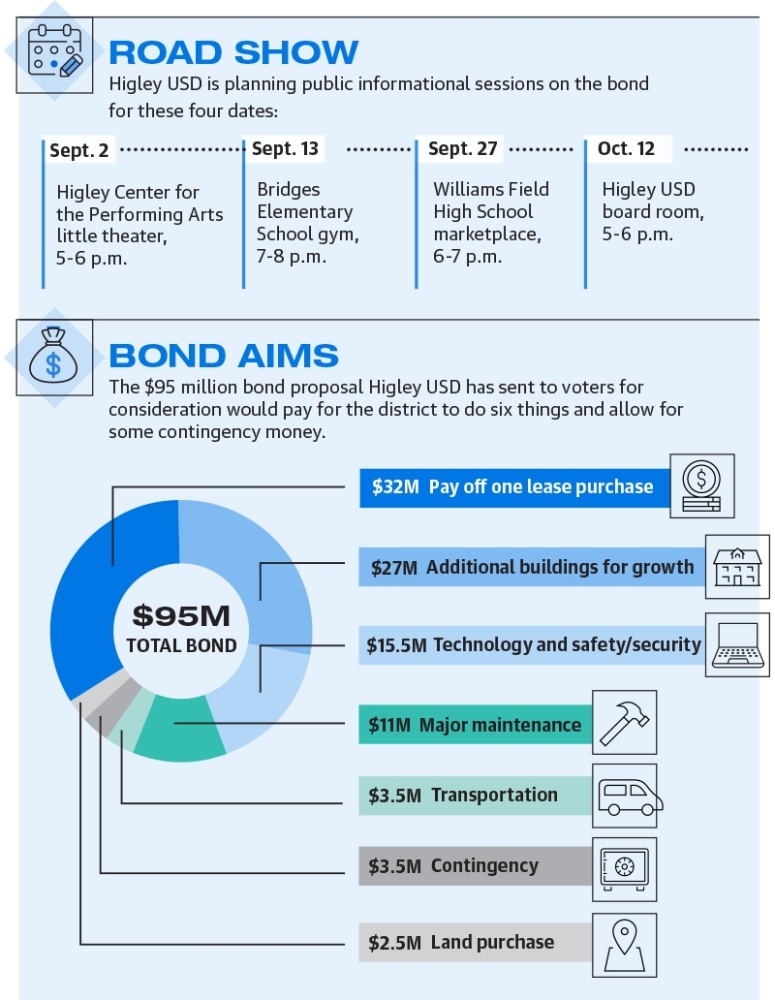