“We’re trying our hand at homeschooling and will re-enroll in GPS when it’s safe,” she said.

However, Justalyn Couser, with three kids and a graduate from the district, fought hard to have GPS reopen to in-person instruction as soon as the state would allow.

“To me, the bottom line is we as parents know our children,” Couser told the governing board July 28. “We know what is best for them. We know what they desperately need right now. As a board, you know how this community feels. You asked us, and we spoke.”

The sharp divide over how to return to school from the coronavirus pandemic has made for difficulties in planning and a fallout in enrollment, schools officials said. Derivatives of enrollment determine state funding.

The three districts that serve Gilbert all have seen drops in their 40th-day student counts. GPS, for one, budgeted last spring with an estimated loss of about 400 students. But the losses thus far are even greater—about 900 students. Meanwhile, some local charter schools said they have seen mixed results on enrollment this fall.

While there is still time for enrollment to stabilize before the 100-day mark, districts are preparing to make cuts to this year’s budgets and preparing for a more austere 2021-22 budget, officials said. Beyond funding, the uncertainty makes it difficult in other areas, such as staffing and class sizes.

“This COVID[-19] roller coaster that we’re all living—where it’s a high and a low, sometimes within two hours of one another—has proven to be very difficult for many of us, but we’re trying to roll with the punches and do our best for all involved the best way we can,” said Mum Martens, Higley USD human resources executive director.

Through summer governing board meetings, parents weighed in through emails or board comments with some suggesting in forums they would leave the district if the district did not reopen in the manner they favored.

Early enrollments mostly were down, but district officials said a deeper dive suggests other things are at play.

“When we analyze numbers, we saw we may have lost here or there in elementary [students], but we gained in secondary,” HUSD Associate Superintendent Dawn Foley said.

In fact, HUSD’s losses were 26 students from grades 1-12, while kindergarten lost 122 students, and the district’s tuition-based preschool programs have lost 268 students, with economic factors being a possible reason, said Susan Borzych, the assessment and student information director for HUSD.

Higley’s heavier losses in kindergarten are mirrored in the other districts.

“We have heard from some parents that they are just waiting the year out, and then their child will begin at Gilbert [Public] Schools next year,” GPS Marketing and Communications Director Dawn Antestenis said.

Conversely, secondary campus numbers are up. Borzych said that is particularly true at the 11th and 12th grade levels, although she said the district has not figured out why.

At Chandler USD, Chief Financial Officer Lana Berry said secondary enrollment is up and notes the district often sees a spike going from eighth to ninth grade with parents often choosing the more comprehensive district programs at that level.

Overall, CUSD is down nearly 2,500 students from the 2019-20 school year. Pre-COVID-19, the district anticipated some growth, Berry said. CUSD’s slower, staggered reopening appears to be the reason, she said, citing district surveys.

Some, although not all, charter schools are reporting increased enrollments. One is Val Vista Academy, up 17.61% from last year, but Principal Debbie Baca said she is not sure the reopening plan for the school, which has been growing for several years, is the reason. She did note the closing of another nearby charter school also had an effect on the enrollment.

“Personally, it’s hard,” she said. “It’s hard for teachers. It’s hard for parents, some of whom are saying just stay home and others, ‘Why the heck are kids having to wear masks?’” she said. “Truthfully, I have to commend our community for the way they came together.”

Arizona’s school funding formula is based on average daily membership—the total enrollment of fractional and full-time students, minus withdrawals, of each school day through the first 100 days in session.

Additionally, the pandemic has brought on additional costs, such as sanitizing fluids and equipment to clean schools as well as personal protective equipment to keep employees safe, officials said. The districts have received assistance from the federal Elementary and Secondary School Emergency Relief fund to help offset the additional costs.

Additionally, the three districts have applied for an Enrollment Stabilization Grant from the state. That is $487 million Ducey has set aside from Arizona’s portion of the Coronavirus Aid, Relief and Economic Security Act, or CARES Act, so schools that meet certain requirements will be funded this fiscal year at least 98% of what they received in fiscal year 2019-20.

Still, that means current year budgets will have to be reduced. Berry said even backfilling with grants, CUSD expects to lose about $8 million in budget capacity. Betz said for GPS it probably means $2.5 million. Officials said the districts will get by on carryover or reserve funds.

The other area affected is staffing. The schools have been asked to staff without firm knowledge of how many students would be coming and how many would want each learning mode, leaving the districts to repeatedly survey as circumstances changed.

“Our goal has been to be as flexible as we possibly can to serve the needs of our students and our families and our staff, and to keep in as frequent communication as possible with all stakeholders so that we could have access to the information we need to staff appropriately and in a timely fashion,” Antestenis said.

Martens also said HUSD is trying to be fluid as families make decisions on how they want their students to be taught.

“We are actively hiring,” she said. “Every week we are hiring new positions, whether it’s certified or classified [staff] and trying to bring people in so we can work to alleviate what’s been happening because we’ve had families change their mind, and we’ve also had, in all honesty, employees come to change their mind quite often, too.”

But CUSD’s Berry said the loss of students and, in turn, funding could result in a loss of positions in the 2021-22 school year.

“We’ll try to do it the best we can through [attrition], but definitely if we lose 2,000 kids, that’s a number of staff members,” Berry said. 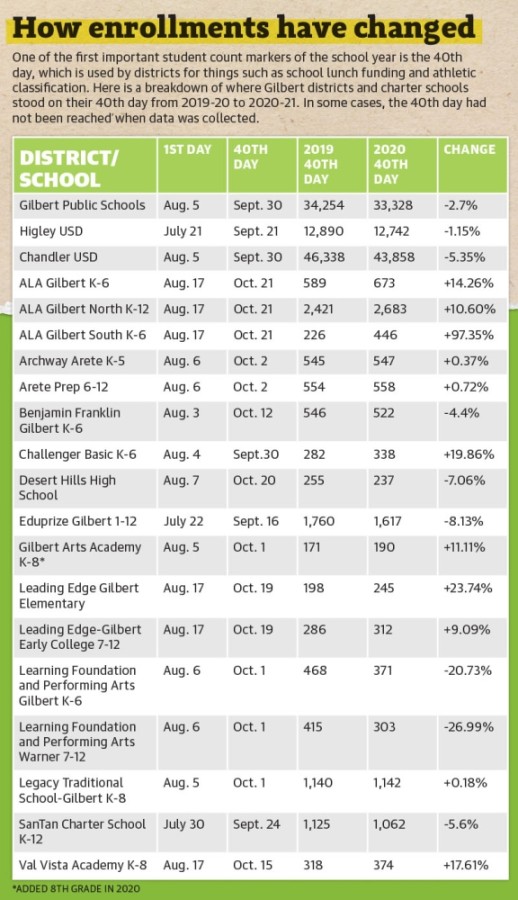