The late starts move the first hour back from a 7:25 a.m. to 7:40 a.m. The time has been used for beginning-of-the-year mandatory trainings; staff meetings that include team building, celebrations and a review of upcoming events; site-specific development topics; professional learning community time with department and instructional coaches; timely data conversations and common assessments; and ongoing collaborative curriculum work.

Dawn Foley, the district’s assistant superintendent of K-12 educational services, said the district has found it important that the time allotment is consistent and the time is intentional and targeted in its usage because of the short time involved.

Transportation is unaffected by the schedule, so students who are bused arrive on campus with spare time before their first class. Superintendent Mike Thomason said going into the program, the lack of supervision for that period was a concern to him, but Higley High School Principal Alan Fields and Williams Field High School Principal Steve Tannenbaum said it has not been an issue.

In response to a question from board member Jill Wilson, Fields said tardiness is down slightly on Wednesdays.

According to a survey that received 50 responses, 25 respondents find the time devoted to these meetings is just about right, while 22 found it to be too little. The survey also found 26 of 50 find the meetings very or somewhat productive, with another nine saying it was neither productive nor unproductive.

Tannenbaum said he appreciated the district letting the high schools try the program.

Governing board Vice President Amy Kaylor said that as a parent, the differing calendars of early releases among the elementary, middle and high schools is “messy” and needs to be cleaned up. Wilson agreed with her.

Not Your Typical Deli serves not only award-winning food, but a greater mission

Chef W Rieth has found a way to combine his two passions, making NYT Deli as much a highly recognized deli as a job-training site for persons with special needs.

Owners Julian and Karen Loveday are set to open CycleBar on Jan. 28 in the SanTan Pavilions.

Fitness is an important component of kajukenbo, but so is the way a student conducts his or her life. Professor Kelly Corder said

Häagen-Dazs opened a store in the SanTan Village mall 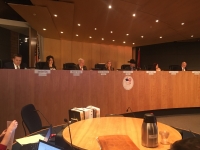