Voters will get say on districts’ financial requests 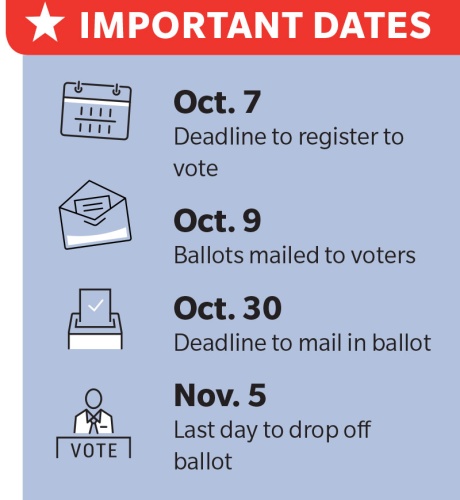 The three school districts that serve Gilbert residents are each bringing financial questions to voters this fall.

Mail-in elections start Oct. 9, with Nov. 5 as the last day to hand in ballots.

Each district is bringing something a little different to voters.

Gilbert Public Schools has operated with a 10% maintenance and operations override, wherein voters can approve a property tax increase to add 5% to 15% to what the state gives for salaries and programming. The district seeks to increase the override to the maximum 15% to remain competitive in salaries and programming with surrounding districts. It also has a $100 million bond question on the ballot.

Higley USD is asking to extend its 15% maintenance and operations budget override. HUSD also wants to reallocate the last $14.62 million from a 2013 bond.

Chandler USD is not seeking an override, but is putting up the largest bond package in district history: $290.25 million.

Gilbert Public Schools stands alone among the three districts in seeking a larger maintenance and operations override—largely because while GPS employs a 10% M&O override, most area districts, such as CUSD and HUSD, operate with 15% overrides, the most allowed by law.

GPS also stands alone in asking for a tax increase, and is the only district that will have opposition letters in its election publicity pamphlet. The letters address only the tax increase.

“I don’t get frustrated with it,” said Bonnie Betz, business services assistant superintendent for GPS. “We’re not going to be able to compete [with other districts for teachers]. If you don’t care about that, then don’t vote for it. We’re just trying to tell you what our needs are.”

Moving from a 10% to a 15% override would raise an additional estimated $10.52 million annually for GPS, which would be used to fund competitive salaries, add social and emotional support personnel and programs for students and reduce class sizes in the areas of highest need.

The state has not paid the district enough money to fully fund Gov. Doug Ducey’s “20 by ‘20” salary plan, which calls for a 20% increase in teacher salaries by fall 2020. To fully fund it, the district has moved money from other areas. However, such reallocation is an unsustainable practice, as GPS Board President Reed Carr has pointed out at governing board meetings.

“Historically, the biggest metric that makes a difference in the success of the students in the classroom is the quality of the teacher,” Betz said. “So arguably, if we cannot compete by providing competitive salaries to our teachers in the classroom, our students will not get the same level of education as [students of] our competitors or [in] our other surrounding school districts.”

If the override fails, the district could take it to the voters again in 2020. If it were to fail again, the district would have to start making cuts; the past override will enter its two-year sunset period in fiscal year 2021-22.

HUSD is the only district not seeking new money. Its ballot issue—a 15% maintenance and operations override—is a continuation of an existing override. Voters are merely being asked to reset the clock on the 2015 override.

Override measures last for seven years, the final two of which are a “sunset” period: the override falls to 10% in the sixth year and to 5% in the final year. If this measure passes, Higley will avoid its “sunset” and continue to receive the additional 15% for its M&O budget from property owners.

District officials have credited the 15% override with keeping HUSD employee salaries and benefits packages highly competitive even as the district pays more than $4 million annually on leases of its middle schools.

HUSD Superintendent Mike Thomason also pointed to the many programs the override has funded for the district, including additional offerings in athletics, career and technical education, arts, academics and before- and after-school programs.

“The Arizona revised statute pays for a basic Arizona education, and I can tell you, within the Higley Unified School District, our voters and our community have genuinely supported a more rich, higher-based education program,” Thomason said.

The HUSD bond question, meanwhile, is not for new bonds. Instead, the district is looking to take the last $14.62 million from its 2013 bond and reallocate it from projects approved by voters in 2013 to new projects.

The primary difference from when the bonds were initially approved is in funding to build schools. At the time, HUSD wanted to build two schools. It built one, Bridges Elementary School. But the district’s schools all have the capacity to take in more students, delaying the need for another school.

If this reallocation were to pass, the district could turn its attention to more pressing needs, Thomason said, rather than pushing forward with a less urgent project.

“Utilizing that [money] for areas that we need it, compared to areas that we don’t, would be really important for the district to continue on to be successful in the next few years and make sure that our schools are in prime condition for our community,” Thomason said.

Thomason said the district does not foresee going out for new bonds for another three or four years.

CUSD will not propose an override this election. However, it will ask voters in November to approve a $290.25 million bond to improve its 44 existing schools and to add an elementary school and a high school to the district.

The bond is the largest sum of money the district has gone to voters for to date, but according to officials, it is needed to accommodate increasing enrollment and aging facilities.

CUSD Chief Operating Officer Lana Berry said the bond would not increase taxes for residents and that the property tax rate would remain stable at about $1.28 per $100 in assessed valuation. She noted that if the bond were to fail, residents would see a decrease in the tax rate, but eventually, the district would need to ask voters again for assistance, likely at a higher tax rate.

Berry said the state-allocated funds for facilities fall tens of millions short of the district’s needs. The district passed a $196 million bond in 2015.

With projected enrollment growth in the Val Vista corridor—the part of the school district that services the towns of Gilbert and Queen Creek—and existing sites already at capacity, Berry said the money is necessary to build the two new schools in order to ensure students have seats in their neighborhood schools and that teacher-to-student ratios stay low. Berry said the district projects adding 300 students each year for the next several years.