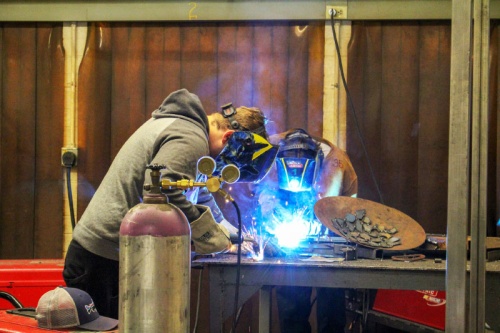 Highland High School students in the agriscience and engineering class have learned to weld, giving them an employable skill.

From freshman orientation, Parker Ferguson took an interest in the offerings of the agriscience and engineering class at Highland High School. Three years later, the 17-year-old junior has stuck with it, learned to weld, earned two internships and sold pieces he made at the school and at the county fair.“I like the freedom and that I get to work with my hands,” Ferguson said. “Mr. [Curtis] Willems teaches us how to use all of the tools and the proper safety procedures, and then he sets us loose, and we get to build whatever projects we want.”

Ferguson plans to pursue a precision manufacturing degree after high school and use that to get a job in computer numerical control manufacturing. Such a path makes Ferguson an example of the value of career and technical education, or CTE, offered in Gilbert’s high schools.

Classes in CTE are growing in popularity as the demand for skilled workers increases. Participating in CTE classes offers students an alternative path to a solid career, many with jobs that can end up paying six figures in time.

State government and district and charter schools have ensured students have these career offerings and access to valuable certifications. Chandler-Gilbert Community College and trade schools also offer a shorter and less expensive path between high school graduation and employment in a good career.

“If a kid can work hard and can build something, then they’re pretty darn employable,” Willems said. “That’s the goal.”

Business leaders have made it clear to the schools that they need workers.

“One of the dilemmas that we have in the business community is that we are short in all industries on those individuals who want to jump straight into career,” said Sarah Watts, Gilbert Chamber of Commerce vice president for Workforce and Community Partnerships. “It’s something that we’re really focused on from a business development side because we know that that’s impacting the growth of our businesses.”

Watts said she does not know of an industry that is not having difficulty finding a qualified workforce. It crosses boundaries from science, technology, engineering and mathematics—the STEM fields—to retail to manufacturing to trades and utility jobs.

The chamber facilitates dialogue between the schools and business community by organizing summits, tours of industry sites for teachers and work-shadowing mentorships for students, Watts said. Some of these efforts are even directed at the junior high or younger levels.

School officials agree with Watts about the importance of exposing students to potential careers, the demand for workers in those fields and the potential of high-paying careers for graduates.

“I think the education community is receptive to feedback from the businesses and vice versa,” Watts said. “I think that there’s a real desire to work together, and the challenge we have is to identify the specific needs. We need to be more unified in coming up with a solution to that.”

Watts and school officials acknowledge that some jobs coming from CTE fields may be perceived as being less desirable than what a student can have from a four-year degree. But they also say that perception is changing over time as career education has expanded greatly from the days of teaching only auto shop and home economics.

Higley USD and Gilbert Public Schools each has more than 20 CTE classes over nine fields ranging from criminal justice to bioscience. Chandler USD has 19 programs over nine fields with 74 classes. Perry, the lone CUSD high school in Gilbert, has six of those categories offering a total of 36 classes.

Some of those programs can be quite popular. When HUSD announced it would be offering law enforcement and public safety classes, more than 300 students chose it as their elective, CTE Coordinator Annette Schmidt said.

“We at the time did not have the funding [to accommodate the demand],” Schmidt said. “We only opened two sections at each campus. But next year we’re going to open with two full-time teachers.”

While the classes are electives, they do fulfill a credit requirement toward graduation now that the state allows either a CTE class or a fine arts class in the student’s program of study. The Arizona Board of Regents also accepts CTE credits in determining a student’s admissions eligibility.

“What we’re trying to do now is rather than just say we are leading toward certifications, we’re actually implementing them,” GPS CTE Director Doug Daley said. “Students are now starting to take those certifications because that’s something they’ll have for life and be able to use.”

And they do it at a fraction of the cost of getting even a two-year degree. The test for an Adobe certification that shows an employer the student has mastered an Adobe software product is $72. A sports medicine certificate costs more at $400, but with it in hand, an 18-year-old high school graduate can work as a personal trainer.

“We want to make sure that we’re not just having them test to test—that they’re testing for something that they can actually take to an employer and say, ‘I know how to do this. Give me a job.’” Schmidt said. “And the employer will say, ‘Excellent. I need you.’”

The offerings expand beyond what the high schools have, too, as each of the districts partner with the East Valley Institute of Technology, a joint technological education district that is open to high school students—at no cost—as well as to adults, who do pay tuition but can apply for financial aid.

Charter schools also partner with EVIT. Desert Hills High School in Gilbert is an alternative charter school with an enrollment of about 300 students. Many of the students have come to catch up on credits or just because they were lost in the larger schools.

Desert Hills School Leader Dave Miller said the school still has established a partnership with EVIT. Students can do high school classwork in the mornings, and then the school will bus them to the EVIT campus in Mesa in the afternoons.

Miller and staff also do what they can to expose students to career opportunities. The school has started a journalism program and hosted a career day with representatives from the military, colleges of all kinds and even a school alumna who has a makeup business. A science teacher, tipping his hat to Gilbert’s agricultural roots, has built a greenhouse and farm behind the school with goats and chickens, and students participate in the care of the farm even on weekends, Miller said.

Students have other alternatives to the four-year degree path, such as military programs, trade schools or community colleges.

Community colleges are not just a way to get prerequisite classes out of the way before transferring to a four-year school anymore. Chandler-Gilbert Community College offers programs with certifications in more than 50 career areas, Dean of Instruction Gabriela Rosu said.

The programs include such areas as aviation, mortuary science or massage therapy. Some programs can be completed in as few as nine months.

“Businesses come to community colleges because we have the hands-on [experience],” Rosu said “Universities, there’s more theory and research. Community colleges are hands-on, which gives them that experience [of] how to do things, how to fly a drone, how to repair an engine on the 727 (airplane).”

Watts underscores that students do not have to end their education if they do take a job out of high school.
“There are a lot of programs out there and a lot of employers who want to train up and upskill their workforce, but they want them to be specific to the training and development that’s needed within that business,” she said.