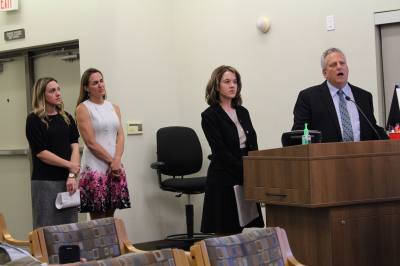 Correction: The directions on the borders have been changed to correctly reflect the boundaries.

The district’s governing board heard the recommendations at its May 8 meeting. They come after a series of public meetings about the changes.

The board also heard options for its next proposed bond action, which could go to voters in November. Part of the bond would be dedicated to building a new elementary school in the district's southern portion.

The new school, which is being called Elementary School No. 31 for now, would take on the staff and students from Weinberg Elementary School, school officials said. Weinberg would then be converted into a gifted education academy.

Nearby Haley, Ryan, Patterson and Riggs elementary schools would have their boundaries affected under the recommendation, which is expected to return to the board for a vote May 22.

The board heard recommended changes to address growth in what the district calls its “Val Vista Corridor.” Most of that area falls in the Gilbert town boundaries. Haley, Patterson and Weinberg are at or near capacity in the area, and nearby plots of land are expected to be developed soon, Chief Financial Officer Lana Berry said.

The recommended changes, which take into account demographic projections of the area’s growth, are meant to bring balance to enrollment at area schools and answer a need to meet demand for more gifted services in the district, Elementary Instruction Assistant Superintendent Frank Narducci said.

CUSD has one gifted education campus, Knox Gifted Academy, on the district’s west side. It also offers satellite services at some other campuses to help keep pace with demand.

Additionally, 1/2 square mile bordered by Ocotillo on the north, Chandler Heights Road on the south, Val Vista Road on the east and Lindsay Road on the west would move from Ryan to the new elementary school.

Finally, a square mile bordered by Riggs Road on the north, Hunt Road on the south, Recker Road on the east and Higley Road on the west would move from Patterson to Riggs.

The changes would take place for the 2020-21 school year. Families who wish to keep their children at their old school would be allowed to do so, and the district would accommodate those students in busing, Narducci said.

Building Elementary School No. 31 would depend on bond money the district does not have at the moment. About $17 million remains from the $196 million 2015 bonds, Berry said.

Still, the amount—ranging from $50 million to $94 million more than the 2015 bond proposal—caught the attention of some board members.

“The total amount that we're looking at is kind of like, gasp,” board President Barb Mozdzen said. "I know that many of our community members and taxpayers in the district are very concerned that this amount of a bond would really increase their taxes.”

However, Berry said the district anticipates the secondary property tax rate would remain steady at $1.28 per $100 valuation. In fact, Berry said the projections are based on a conservative 1% growth rate in assessed valuations.

That projection came from the growth over the past 10 years. The period included when values collapsed in the wake of the Great Recession. Valuations have been increasing at 8% recently, Berry said.

Growth above 1% could help the district retire the debt early or make it so the district would not need to sell all the bonds, Berry said.
SHARE THIS STORY

Voters will see a Chandler USD maintenance and operations budget override on the Nov. 2 ballot

The goal of Kids in Focus is to encourage children to reach their potential using photography to ignite their imagination and build their sense of confidence and value.

Gilbert Sister Cities is holding a competition to choose a young artist to design and help paint a wall mural at the organization’s Friendship Garden under development at Gilbert Regional Park.