A handful of students living in the Recker Pointe neighborhood could change schools under a boundary change proposed to the governing board April 10.

The area sits within the attendance boundaries of Gateway Pointe Elementary School but would be recast into Higley Traditional Academy’s boundaries, according to the proposal Support Services Assistant Superintendent Michael Fowler presented.

The neighborhood is still under development. Only eight students in six families are affected. Fowler said the district expects 20-24 students in the area when it is built out.

The district already supports families in the Higley boundary who do not wish to have the traditional academy experience. Those families can send their children to Gateway Pointe. At present, the eight students in Recker Pointe are evenly divided between Gateway Pointe and Higley.

As required by state law, the district will hold an informational meeting for the neighborhood at 6:30 p.m. April 15 at Gateway Pointe’s media center.

Board action is expected at its next meeting April 24. 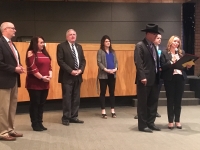