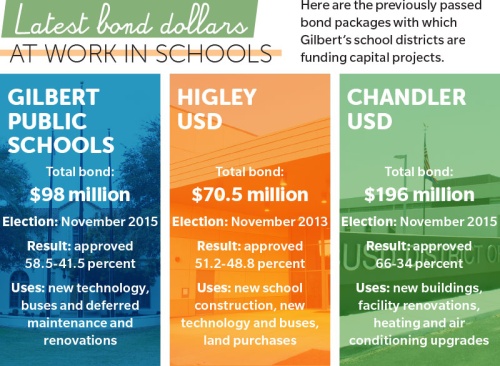 Here are the previously passed bond packages with which Gilbertu2019s school districts are funding capital projects.

Editor's note: This story has been updated from the print edition to reflect action taken by the Higley USD governing board March 27.

The bonds have allowed the districts to keep the schools operational, provide needed updates and upgrade areas such as security, district officials said. Universally, they credit voters with helping them through lean years and legislative cuts.

However, the bond money is running short at Gilbert Public Schools, Higley USD and Chandler USD, and each district has areas of concern that officials say need addressing.

All three districts are considering going before voters within the next two years for another set of bonds or an override of their capital budgets or to reapportion their current bonds.

“Whenever we go out [to voters] for an override or a bond ... it’s important for us to show our community again how we have been good stewards of our money,” Gilbert Public Schools Superintendent Shane McCord said. “We wouldn’t be asking for these things if we didn’t think it was needed for our students and our staff and our community.”

Bonnie Betz, who started with the district in July as its business services assistant superintendent, said she already has seen officials working to keep up with the changing needs as bond money is spent.

“Being new coming in, one of the things I have noticed is that we do have a plan for the bond spend, but the plan has been adjusted annually based upon the highest-priority needs,” Betz said.

One example of changing need is last October when a transformer went out at Ashland Ranch Elementary School, leaving the school without power.

While that transformer was not scheduled for replacement yet, the school could not operate without a replacement. Bond money gave the district enough flexibility to reprioritize and fix the $150,000 problem, Betz said.

The district also tries to squeeze extra life out of capital items—even with technology, a resource that quickly can get outdated. GPS schools issue Chromebooks to junior high students. Those computers are expected to follow the students through high school. Once done there, if they still have life in them, they are repurposed into the elementary schools for use, McCord said.

“You have a maintenance schedule and the lifespan of certain equipment,” McCord said.

“I think every district probably goes past that end of life on a piece of equipment, and you piece things together the best you can.”

This spring’s rains, for example, have revealed needs on some of the roofs, Betz said. Chillers to keep classrooms cool and parking lot conditions are also concerns, and some athletic facilities need work.

Betz said the community has shown how important the arts are in Gilbert, and she listed a number of needs in the area: Gilbert High School has cracks in its orchestra shell, a $110,000 piece of equipment; Highland High School’s auditorium seats have not been replaced since it opened in 1993 and have grown uncomfortable; and some musical instruments, such as tubas, are too expensive for families to purchase.

While the district still has another round of bonds it can put out for sale this spring or next fall—and Betz said the district could even split it into two sales—the renovation needs have been even greater than anticipated at the time of the 2015 election, meaning more money will be needed sooner than expected.

Some help will come if the Legislature continues to restore District Additional Assistance funds, the capital funds the state owes the districts.

For Gilbert Public Schools, that could be about $10 million a year, though that total is still less than what the district has been spending in bond money on an annual basis.

Betz said DAA money likely will go to new curriculum, which DAA can pay for but bond money cannot. It has been several years since the district has had new curriculum, she said.

In the meantime, Betz said the district and its board will weigh whether to go out for more bonds or a capital override this fall or wait another year until 2020.

Higley has not been in front of voters on capital needs since 2013, when they narrowly approved a $70 million bond issuance. Those bonds were sold in three phases from 2014-16, but the district entered this school year with $16.7 million still available.

As a result the district has done weatherization and enhancement projects at Coronado and San Tan elementary schools this school year, plus fence painting and lighting updates at various locations.

“We’re still growing by anywhere between 2 and 5 percent a year,” he said. “And so there’s many physical needs for children as far as textbooks, furniture, capital needs that we have to continually input into our schools without the funding for it.”

The district also would like the funds to pay off the leases on its middle schools. Those leases cost the district up to $4.4 million a year, Thomason said.

However, the district’s debt ratio is about 23 percent of the assessed valuation in the district, below but close to the limit of 30 percent set by state law, district Chief Financial Officer Gary Holland told the Governing Board last fall.

As a result, in an effort to not add to the district’s debt, officials said they will not ask for new bonds. Instead, the district is considering going to voters to ask for a repurposing of the last $14.7 million from the previous bond.

At its March 27 Governing Board meeting, Holland showed the board how the unspent portion and how it is earmarked to be spent now, including nearly $11 million for new school construction and more than $4 million for land acquisition. The district does not have need for either category anymore, Holland said.

Thus, Higley USD would like to spend the last monies in other ways: nearly $12.5 million for renovations, remodeling and maintenance; $1.5 million in pupil transportation; and the remainder in technology upgrades, according to the district's presentation to the board.

Making these changes would not require additional bond sales or a tax increase to the voters. However, they do require voter approval.

District Chief Financial Officer Lana Berry told the Governing Board on Feb. 13 that even in the early to mid-2000s, when more money was available from the state, the district found it needed bonds to meet the community’s expectations for its schools. That was before the Great Recession brought drastic cutbacks, she said.

“Even when we’re fully restored [in state money], it doesn’t mean that we’ll have enough money,” she said. “We’ll probably have other needs that our community wants and expects.”

Berry said the district is in the process of assessing its capital needs for the next five to seven years. Support Services Associate Superintendent Frank Fletcher said the district will evaluate everything from roofs to carpets based on the manufacturer’s expected life cycle.

The district also is addressing the schools approaching enrollment capacity in the growing southern portion of the district, including Weinberg and Patterson elementary schools in Gilbert.

Some relief could come from boundary changes, but another elementary school needs to be built, too, Chandler USD officials said. Bond money would be used for construction.

Along with the capital needs assessment, Chandler USD has formed a bond committee to give input.

Berry said the district expects the committee to make a recommendation at a May 8 board study session on a bond package that would fill the district’s capital needs for the next five to seven years. The board would vote June 12 on whether to hold a bond election in November.