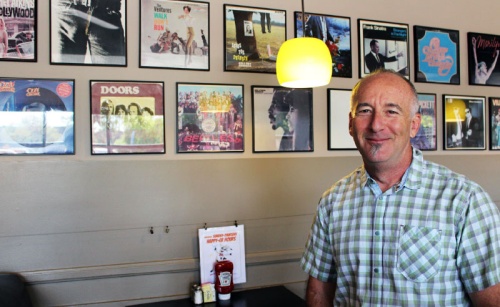 Jeff Flancer has given his Gilbert restaurant an American vibeu2014from the food to the album covers adorning the walls.

When Jeff Flancer was looking for a place to start a restaurant in Arizona, all he wanted was a spot where he could make good bread.

“I knew I wanted to come out here,” Flancer said. “I didn’t expect to be in Gilbert.”

Flancer graduated from The Culinary Institute of America in New York. He worked as a restaurant chef in the ’80s before owning his own restaurant in New Mexico for nine years. He arrived in Gilbert in 2000 and opened the restaurant that now bears his name. He later opened a second location at 1902 N. Higley Road in Mesa.

“[Flancer’s is] a neighborhood classic,” he said. “We take [American] favorites and turn them into something unique and modern.”

The restaurant offers gourmet sandwiches on fresh bread baked in-house as well as salads, hamburgers, breakfast and pizza. Flancer wants the eatery to be known for its consistently high-quality food, despite the menu changes that have been made during his nearly 20-year tenure in the city.

“The quality of the food has always stayed at a high level,” he said. “It’s not always easy in this day and age.”

Located near Gilbert’s restaurant row, the restaurant offers unique food, but Flancer said it sets itself apart with its extraordinary people.

Much of Flancer’s staff has been with the restaurant for over a decade. Executive Chef Jacinta Santillan has been preparing the restaurant’s signature dishes since it first opened in 2000.

“I’m thankful for my staff,” Flancer said. “It’s a wonder to have people stay around for so long, and I could not do it without them.”

Flancer’s not only serves food but gives back to the community  as well.

For 18 years, Flancer’s held an annual pizza-eating contest to raise money for charities the restaurant supports. Flancer said the event raised between $25,000 and $30,000 a year.

Just last year the restaurant held the first of what Flancer hopes will become an annual 5K charity run.

“We’ve gained all those calories from all the pizza contests,” Flancer said. “Now we’re going to run it off.”

While he enjoys running the business and giving back to the community, Flancer continues to look forward to eating the food.

“I’d rather eat here than most other places,” he said.