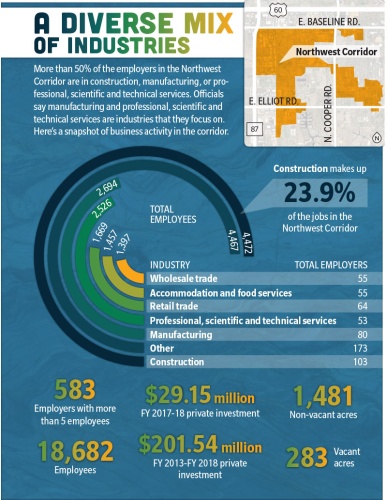 The Northwest Corridor, Gilbert’s oldest and largest employment area, will get fresh scrutiny in the coming months from town leaders who are eager to keep the area vibrant.

City officials are not yet calling it a redevelopment district, but that designation—which the Heritage District has held for 30 years—is one of several options that can be used to prevent decline as the area ages.

Before making any decisions on how to proceed, staff, at council’s direction, plans to do an extensive effort to listen to stakeholders in the area—from employers and employees to residents to people who drive, bike or walk through the area.

“We don’t want to create a solution and then back everything into the solution to justify it,” Gilbert Economic Development Director Dan Henderson said. “We would rather, in a very authentic way, listen, identify solutions and then begin to adopt those.”

Groups from the nonprofit Urban Land Institute and Arizona State University will be involved in the early listening efforts and study of the area. The town can then put together a plan for what the area might need to continue growing.

Gilbert leaders studiously avoid the term “redevelopment,” at least for now, and are quick to point out outside investments are still made into the area.

“What I really appreciate about council’s direction and [Town Manager] Patrick [Banger]’s vision is that we don’t know if we’ve quite hit that peak,”  Redevelopment Administrator Amanda Elliott said. “We still have growth happening, but before we hit a decline, we want to be reinvesting.”

She said staff has heard about industrial buildings being utilized as office space, creating at least the perception of parking challenges. Large setbacks—the minimum distance which a building or other structure must be set back from a street or road—can also eat into parking.

The setbacks often came from development codes in place at the time businesses came into the area, Henderson said. But its development needs today can be different—and also different from new development on the town’s south side.

“By way of land development code, I’ve got to treat the development down in the lower southeast corner of town exactly the same as in the northwest corner,” Henderson said. “So the idea of bringing tools, listening to trends, seeing trends, parking ratios, employment surveys ... are some of the compelling factors that prompted us to bring this to council.”

The town could give developers additional tools to fuel investment, Henderson said. That could include following Arizona law to formally make it a redevelopment district, like the Heritage District, or creating an “adaptive reuse overlay,” a process that allows an existing property to convert from one type of use to another. Chandler has done the latter along Arizona Avenue to the west.

But if the town decides to take action, it will be in the wake of listening exercises staff will have taken, Henderson said. Then council may act upon a “finding of necessity.”

Staff first approached council about the Northwest Corridor last October at its annual retreat. Rather than move ahead with developing a plan, council asked staff to listen to the community first.

That’s where the Urban Land Institute comes in. The research and education organization has a mission to “provide leadership in the responsible use of land and in creating and sustaining thriving communities worldwide,” according to its website.

Gilbert will employ a ULI program called a Technical Assistance Panel. Gilbert will establish a list of questions about the area, and the ULI will establish the panel of experts—such as attorneys, developers, architects or urban space makers—from across the U.S. to help answer the questions and solve issues. The panel will interview various stakeholders.

At the conclusion of a two-month study, the panel will visit Gilbert to talk through challenges and solutions for eight hours, and then create its report.

“It’s a really extensive, amazing opportunity to hear about your area from individuals who are thinking of it in a different way than we are,” Henderson said.

Angie Grendahl, retail development manager for Thompson Thrift Retail Group, has been chosen to lead the ULI TAP for the corridor. She said the panel will help the town understand the retail and development opportunities in the area.

“It’s pretty competitive out there right now,” she said. “It’s important for municipalities to understand how they can foster tenants and users coming to their city. And part of that is streamlining their process internally and also understanding the infrastructure that’s required to attract these users. This process helps them do that.”

As the ULI TAP report comes into focus, the town also plans to engage Arizona State University’s Master of Real Estate Development program. People in the program range from people just out of their undergraduate programs to development professionals, Henderson said.

The ASU MRED group as an academic project will break into small teams that will compete for best projects from what the ULI TAP identifies as corridor focus areas, Elliott said.

“Regardless of who wins and who loses in theory, we benefit from the information that’s generated and the points of view that we think build on what the ULI TAP program will provide,” Henderson said.

Gilbert has partnered with ASU MRED once before: in 2012 for the Heritage District. The groups were each given a location or piece of property to do an in-depth analysis on the “highest and best use” for it, said Curtis Kelner, a principal for Pillar Companies, an investment firm in Gilbert. Kelner was an MRED student then.

Kelner said the students were skeptical about town’s grandiose plans, but as they got into the study, they realized the town’s zoning and willingness to help made the plans possible.

“The town got to see just a ton of different ideas from a lot of people who all have different backgrounds and were all focused on the Heritage District,” he said. “We were able to look at that and provide feedback and other ideas that maybe the town and other folks haven’t thought about.”

There is no firm timeline for  how any of this will progress, officials said. The town would like the ULI TAP study to happen in the fiscal year’s second quarter, sometime in October through December. The MRED project is dependent on ASU’s academic calendar and may not happen until spring.

If after that a redevelopment district is created, the process will be going on for years, officials said. The Heritage District—the town’s “30-year overnight miracle,” as officials sometimes call it—received its redevelopment designation in 1989 and had its first redevelopment plan adopted in 1991 but only in recent years became a destination.

Such a slow unfolding could happen in the Northwest Corridor as well, officials said, and it may not be as spectacular as the Heritage District.

“Even though the manufacturing buildings and industrial buildings tend to be not sexy, that doesn’t mean that we are not going to create our sidewalks and our rights of way and our streets to enhance that sense of an attractive area,” Henderson said.

Elliott said whether people work in the area or travel through it, they should know they are in Gilbert.

“I think part of this entire endeavor is, ‘What’s the long-term vision of the area? What’s the character?’” she said. “There’s a lot of character that we can bring in … so that it is noticeably Gilbert and somewhere that people are proud of.”