Agritopia’s Epicenter gets back on track for construction 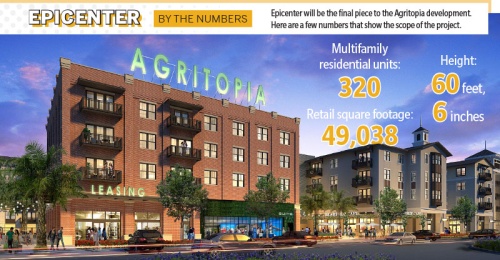 Epicenter will be the final piece to the Agritopia development. Here are a few numbers that show the scope of the project.

For all that Gilbert has to offer, from large to small businesses to public amenities and a diverse portfolio of residential options, officials say they have sought one thing that has eluded the town for years: vertical mixed-use development.

But after five years of planning, entrepreneur Joe Johnston is ready to answer the town’s call with his latest and last addition to his Agritopia development—Epicenter.

The long-awaited development will combine multifamily residential housing above first-floor retail and restaurants in what is called a “loft-above” arrangement. Plans call for 320 residential units and 49,038 square feet of retail. Stacking the different uses on the 21.8-acre site is what makes it vertical.

For the town, it is an efficient and attractive use of land, officials said.

Agritopia Business Manager William Johnston, son of Joe Johnston, said building vertically is a more expensive way to develop either piece, retail or multifamily residential, and an uncommon way to do it as well. But William Johnston said the developers wanted an urban core for Agritopia, and Epicenter will accomplish that.

“We think it will be successful,” he said. “Our partners believe in it, and they’ve put in a lot of time, effort, money, dreams into it as well. So for us, this is a culmination of a lot of hard work.”

The land on which the Agritopia development sits is the farmland where Joe Johnston was raised. By the late 1990s, with development encroaching, Joe Johnston sought to preserve the land. In 2000, Agritopia was born as a village to honor the town’s agricultural roots.

Johnston envisioned a walkable development that attracted people of all ages. In the ensuing two decades, Agritopia has filled in with a farm, a community garden, single-family residential homes, the LivGenerations Agritopia senior living community, a private school, the Joe’s Farm Grill restaurant, the Coffee Shop at Agritopia and the Barnone maker space for local crafters.

Epicenter is to be the final piece, a place where people could rent into the area and also provide an urban feel. Appearing before the Gilbert Planning Commission June 5, Joe Johnston called it a “capstone” for Agritopia.

“We’ve tried as the ‘topia’ part of the name Agritopia to create a community with village life or common activity, where people are known and not anonymous, where people of all ages and all stages can mix,” he said. “This capstone project allows people to have more of an urban vibe that brings in the amount of commercial we have always planned since day one to serve the town of Gilbert, to serve the residents, focusing on food and health and the best of Arizona. And also residential options that allow for people who don’t want to own their own property, who want to have the simpler life.”

But bringing this part of the development to fruition was anything but simple. The Johnstons identified a need for rental units above shops during the Great Recession, and their ideas morphed into Epicenter, William Johnston said. Original designs were approved in 2014.

But as it approached construction, Johnston Properties’ development partner pulled out in December 2017.

The Johnstons regrouped quickly and partnered with StreetLights Residential, a real estate development group in Dallas that is working on some other Valley projects, in May 2018. LRK, a Memphis architecture firm, was brought on for the design.

The project went to the planning commission in March but was met with some resistance to a few details of the plans. After further revision, it got unanimous approval in June.

“It’s just kind of crazy to think that this all happened in a year,” William Johnston said of moving from a new partnership with StreetLights Residential to plan approval. “We all would love to have it happen overnight, but things this large can’t happen overnight.”


What will be at Epicenter?

The trick in making Epicenter work, according to William Johnston, is a design that considers both the retail and the apartment needs. He said one’s needs often are neglected to meet the other’s.

The developers drew inspiration from other projects that do work, including The Union Dallas and The Americana at Brand in Glendale, California, Johnston said.

The first floor is set to be 17.5 feet in height with a goal to have a mix of 50 percent restaurants and 50 percent retail with a focus on food, health and wellness.

“Having a good balance of both is important so that once people finish eating, they have the opportunity then to wander, shop,” Johnston said. “Or if they work out, after they work out, they can go get a bite to eat, and after that they can go and do something else.”

The four buildings of Epicenter have different looks—a purposeful decision to make it look like it was built over time as with many urban landscapes. Different building materials are being used, from stucco to brick to different veneers. There will be flat and pitched roofs. And some apartments will have popout balconies while others will have inset balconies.

The shops, too, will look different and have their own personalities, not just signage to differentiate them. Signs, William Johnston said, can only take you so far, especially if there are many restrictions on them.

“This is a lot more like the interior to a mall where your storefront can be what you want it to be to show off what you’re doing on the inside,” he said.

Johnston said some of the retailers who had signed on previously with Epicenter stayed on even after the first partner dropped off the project. However, no announcement on tenants is expected until ground is broken later this summer or early in the fall.

The multifamily housing also will be differentiated with one-, two- and three-bedroom luxury units. But being able to park the car for the night after work while still getting a chance to go out is the important difference from other places, Johnston said.

Gilbert officials say they are pleased to see Epicenter moving along.

“We’ve been working on it a long time, and Joe [Johnston] is very creative and a visionary, and it will be a great project to see,” Gilbert Development Services Director Kyle Mieras said.

But the town’s interest goes beyond the success of one project. Gilbert officials have wanted vertical mixed-use development in town and have used zoning code in efforts to encourage it.

Developers previously could get a use permit that would allow them to do multifamily residential units, as long as they were not on the ground floor, in a regional commercial development. However, despite zoning efforts, the town was not getting the development they wanted.

The town wanted developments where the uses were more integrated and the site more walkable, Lorbeer said. It even became a point of discussion at Town Council’s annual retreat last fall. At that time, the council directed the planning department to look for alternative solutions.

In June, council approved a staff proposal to remove the use permit and create a multifamily high-density zoning category to perhaps stir more interest.

William Johnston said he hopes Epicenter will blaze the trail for other vertical mixed-use developments.

“We understand that this is a unique project,” he said. “We’re hoping that once it is up and running and is successful that it’s repeated throughout the town and throughout the state.”

Editor's Note: The graphic has been updated to correct an error. Construction for Verde at Cooley Station is located at Williams Field and Recker roads.