O.H.S.O. Brewery & Distillery has turned much of its distilling efforts toward a new product: hand sanitizer.

The local chain, with four Valley locations including one in Gilbert, has agreed to deliver to Banner Health 400 gallons of the supply that is vitally needed during the coronavirus outbreak.

And that may not be the end of it. Operations Manager Adam Davis said he optimistically believes his distillers can produce up to 300 gallons a day if they can procure enough ethanol. He said distributors are rationing that key ingredient.

“It's tough for them to differentiate who's legitimate and who's not,” Davis said. “We have a good standing relationship with these distributors, but even prior to all this, they'll only give you so much.”

But what they do get will go to the medical community, Davis said.
RELATED STORIES

• Coronavirus updates in Gilbert for March 27-29

Originally, O.H.S.O. was considering producing hand sanitizer for guests because supply was expected to run low, Davis said, but then he got an email from Banner Health asking if he could supply any. He said he is not sure how they knew to contact him except possibly word spreading that some breweries were making sanitizer.

Davis told them he could have 400 gallons and asked how much they wanted. Banner officials told him all of it.

“I got with my team on it,” Davis said. “I was like, ‘Well guys, I think we need to reassess the conversation we had three weeks ago about producing hand sanitizer and instead of doing it for the general public right now, I think we need to do what's right and support the doctors and nurses that are out in the front line, that are treating patients regardless of what they're treating patients for. They need it, and we have to do it.’ So it really wasn't a question of should we or shouldn't we. It was an answer of let's get it done.”

Knowing they were not experts in distilling hand sanitizer, Davis’ team researched how to do it and came across a formula from the World Health Organization that O.H.S.O. was equipped to make. O.H.S.O.’s hand sanitizer lacks aloe vera—they cannot get enough to include it—but it meets medical standards. 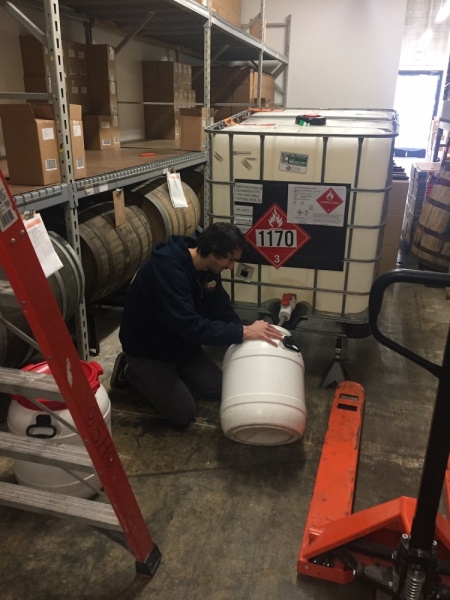 “If we were a factory that already specialized in sanitizer, that'd be one thing,” Davis said. “But we are not. So we are learning a lot as we go. And, fortunately, after a few test runs, we really got the right batch that we felt was going to work best for them.”

When Davis helped deliver the first 100 gallons, packaged in beer kegs, he said he found himself surrounded in a circle by doctors and nurses wanting to know how to tap the kegs.

Banner is paying for the cost of goods, not including labor. O.H.S.O. is making no profit, Davis said.

The restaurant business, as it is everywhere, is not going as well for O.H.S.O., which has had to temporarily shut two locations, though one of those continues to brew beer and the other the hand sanitizer.

The Gilbert location is one that is still serving takeout, including O.H.S.O.’s brews.

“Unfortunately, we had to lay off some of our employees,” Davis said. “And when I say some, I mean 75% of our workforce.”

Davis said people frequently ask him how they can help, and he has a ready answer for them beyond getting takeout.

“Go online and buy gift cards—not just for O.H.S.O., for every local business you can,” he said. “I can't preach that enough. That has been my mantra right now, outside of helping one another. Buy gift cards for local businesses. ... That literally can help them pay their bills, keep their lights on. And when we get through this, you know, then everyone gets to enjoy those restaurants or establishments.”