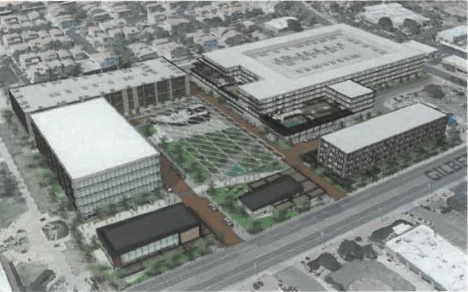 A conceptual rendering shows an idea of what the north anchor to the Heritage District could be. The actual development design has not been created.

Gilbert Town Council approved the sale of a 9.1-acre lot May 16 to Heritage North Partners for no less than $5.332 million, launching the “north anchor” portion of the Heritage District redevelopment plan.

The vote was unanimous, though one Heritage District resident expressed reservations and asked the town to delay the vote and Council Member Jordan Ray said he had received some emails with similar concerns.

The reservations expressed were that a multifamily housing component was not part of the redevelopment plan and that the developer could change course after a 10-year period.

However, the developer’s plan checks off items that were on the town’s wish list for the lot, including a boutique hotel and office and retail space. The plan also calls for multifamily housing and two parking garages.

Staff and council members indicated the initial designs of the project and any future changes would have to pass through the public planning process.

The proposed agreement also has the developer build one amenity and start work on another for the district.

The first is The Commons, a 15,000-square-foot open space area that can be used for public events. Gilbert Economic Development Director Dan Henderson called it a “community life element” where the community members can relax and mingle.

The town would be able to use the space, while the developer would build and manage the space, Henderson said.

The developer would also build the north end of The Paseo, a north-south passage through the Heritage District that would be restricted to pedestrians and bikes.

In addition, the agreement calls for improvements along Western Powerline Trail, which runs along a Salt River Project canal. The improvement would include spending no less than $150,000 on public art.

The hotel would have at least 150 rooms in 75,000 square feet. Henderson said the town is calling it a boutique hotel at the moment as it has flag or brand attached to it, though it would be expected to be “high lifestyle.”

The two parking garages would be five floors each. One will accommodate office, retail and the hotel, with the other accommodating the multifamily housing and the hotel, according to town documents.

While the redevelopment plan did not suggest multifamily housing as a possible use for the space, Henderson said the Heritage District Village Plan zoning allows for loft-above retail mixed use.

Attorney Charles Huellmantel, speaking for DMB/LGE, said the developer wanted the multifamily piece to bring balance of usage to the project’s mixed development.

“It's nice for us to have a lot of office, but it's also nice for us to have residential, which is both multifamily and the hotel,” Huellmantel said. “Those people use the common spaces and the restaurants and all the other things downtown at different times. So we thought it was in keeping with the vision of sort of an organic and full downtown.”

The development agreement also calls for the developer to put in signature arrival signage for the northeast end of the Heritage District, which Henderson said would help better brand the area and let visitors know they have arrived.

DMB/LGE also must make a $350,000 contribution to the Town of Gilbert for the Heritage District.

The developer has done previous projects in the district, and that and the developer’s ethics were part of the reason they were selected, Henderson said.

The developer and town have agreed to a process to determine a fair market value for the lot, according to town documents, but the minimum purchase price has been set at $5.332 million.

A final purchase price is to be determined no later than 45 days after opening of escrow. Closing is to be no later than nine months after escrow opens and cannot be extended more than four month, subject to extension payment.

Mayor Jenn Daniels said Council did not have a set plan on the land’s use when it was purchased.

“We just knew collectively it was going to be a great addition to the entire heritage district,” she said. “Now that we've had citizen input and have had a ton of contributions from residents [and] we've seen tremendous growth in our Heritage District, it's exciting to see that this added piece will become part of the redevelopment puzzle that adds great value to the entire community.”