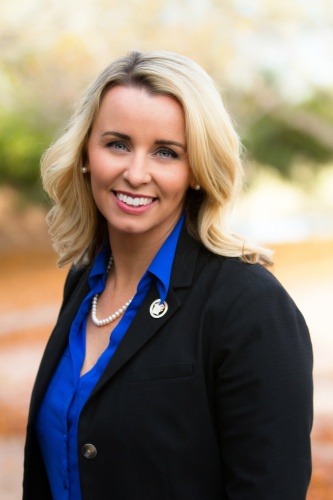 Jenn Daniels is the mayor of Gilbert.

“All points really draw us to the fact that Gilbert is thriving from an economic standpoint, and our businesses are growing,” Daniels said. “And we love to see the success that's coming out of so many of our businesses.”

Daniels pointed to several indicators that back up the claim:

• Gilbert makes up 26 percent of the residential business permits in the East Valley.

• The town has 3.7 million square feet in office, retail and industrial space under construction or proposed for construction.

• Sales tax collection is up 8 percent year over year despite forecasts that anticipated 4 percent growth.

• Hotel occupancy rates have ticked up despite a growth of room inventory.

Daniels also touted growth in the Heritage District, with a second parking garage set to open and Culinary Dropout at The Yard opening later this spring. She also praised the district’s redevelopment plan, which was adopted last August.

“I'm really proud of the work that Amanda [Elliott, Gilbert redevelopment administrator] and her team did as they brought this forward because they showed us possibilities that we haven't ever considered,” Daniels said.

Other achievements Daniels underlined included the arrival of Deloitte, with about 2,800 jobs possible in the coming years; the opening of Park University and an agreement for the University of Arizona to open a nursing program in Gilbert; the renovation and rebranding of Cactus Yards at Elliot District Park; and the construction of Gilbert Regional Park.

Daniels also used the opportunity to call for assistance as the town considers planning for a future past build-out.

“There's a place for every single one of you in that future success of Gilbert,” Daniels said. “So stay tuned as we look forward to fulfilling the mission.”