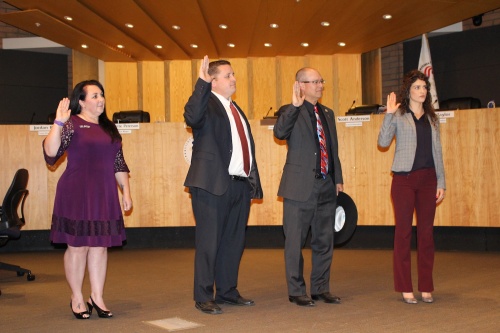 Yentes takes the seat vacated by Victor Petersen, who also was honored at the inauguration ceremony for his service on council.

Petersen decided against seeking re-election to spend more time with his wife and five children.

“It is a sacred honor to serve in elected positions, and I'm grateful for great elected officials who have shown that through the way that they behave,” Petersen said. “And I hope that continues here in Gilbert, Arizona, which, by the way, is absolutely the best city in the world. I have no doubt in my mind about that.”

Yentes was elected as Aimee Rigler but was married in November.

“I'm very grateful for the opportunity to serve with this fine team as well as the town of Gilbert staff,” Yentes said. “[I] just look forward to offering my time and energies, and I'm willing and open to learn.”

In the business meeting, council discussed the possibility of changing the night of council meetings from Thursdays to either Tuesdays or Wednesdays because the town is not open for business on Fridays. Moving the meetings to another day would allow follow-up from meetings to happen more quickly, but no decision was made.