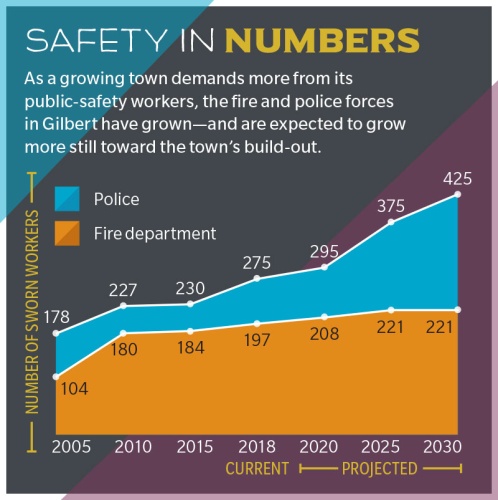 According to town data, about 85 percent of the combined police and fire department’s sworn employees are eligible for retirement or could otherwise need to be replaced in the next five to seven years, and neighboring towns says they can no longer help Gilbert by sharing training facilities.

A question on the Nov. 6 general election ballot asks voters to allow the town to sell $65.35 million in bonds to go toward building an $85 million public safety training facility at Pecos and Power roads, which the fire and police departments could use separately or together to conduct training for incoming and existing personnel. The remaining money for the facility would come from a recently approved land sale and from the general fund.

The proposed facility has a driving course; firearms range; classroom space; and places to train for different scenarios involving one- and two-story residential, commercial and tower spaces.

The ballot language indicates the town will raise its secondary property tax rate to pay for the debt, and the bond’s publicity pamphlet shows a small two-year spike in the rate. The language, however, is required by law because the town is taking on new debt, despite the town’s rate plan, Budget Director Kelly Pfost said.

Furthermore, because the town has retired so much of its previous debt and has a AAA bond rating, town staff actually projects it will take on the new debt without raising taxes at any point, Mayor Jenn Daniels and Pfost said.

“The town has no intention of increasing the tax rate above the $0.99 level it is currently at (either with or without the public safety training facility),” Pfost said in an email.

When the Gilbert Town Council voted June 21 to put the proposal on the ballot, it was split 5-2, with Daniels, and council members Eddie Cook, Jordan Ray, Brigette Peterson and Scott Anderson voting in favor and council members Victor Petersen and Jared Taylor voting against.

Proponents of the bond say the facility is needed to address the coming attrition in the public safety forces and will serve the town’s needs well into the future.

Opponents counter the future need is uncertain and that while some type of facility may be needed, the proposed facility goes beyond the scale of the need. As such, the opponents say, the town should not take on the debt.

“I’m willing to look at something, and I think most people would be, as long as there’s not a lot of it that’s not really immediate need or it’s a duplication of facility,” Petersen said Oct. 5. “That’s the challenge is that people get stuck in this all-or-nothing scenario and it’s really not. We need to come back and see what’s really our immediate need that we can justify.”

While Petersen would like to see the bond be turned back and a smaller project then emerge that could be paid up front or with a smaller bond amount, Daniels said the bonds make sense as they will not raise residents’ secondary property tax rate.

Daniels noted that Gilbert is expected to pay a share of Arizona’s unfunded liability in the public safety retirement system, and that cannot be paid from bonds. Thus, using town funds to pay that liability down while issuing bonds to pay for the facility makes financial sense.

Many of the current personnel were hired during first major growth period in the early 1990s, meaning that many are nearing retirement age, Police Chief Mike Soelberg said. The average number of service years for a fire or police employee is 25.75 years.

The Gilbert Police Department has 405 employees, including 275 sworn officers and 130 civilians. Gilbert Fire has 197 sworn and 19 civilians for a total of 216 employees.

Additional bodies will be needed for both departments with growth, and current employees also must meet ongoing training standards.

The projected numbers account for population growth as well as calls for service, crime and fire statistics, and other metrics, Soelberg said.

The attrition rate in the police department was already at 8.7 percent before Soelberg arrived and has grown to about 9.3 percent in the year and a half since then. That covers not just retirements, but departures from all causes, such as resignations.

If retirements hike the attrition rate much in the coming years, Soelberg said the department will fall behind the numbers it needs.

Petersen said the town cannot know if a retirement spike is coming. Soelberg acknowledges that but said the town still must be prepared.

“We don’t expect 85 percent of the people to walk out the door in 2025, but we have to be prepared for them to do so,” Soelberg said.

Soelberg said being prepared for turnover is important in his department because it takes 10 months to train a replacement officer before he can put that officer on the street.

For the life of the two departments, Gilbert has relied on training facilities from other municipalities, including Chandler, Scottsdale, Mesa and Coolidge.

That has saved the town from having to fund and build its own facility, although officials say using other cities’ facilities has some drawbacks.

Other cities’ facilities may be different from city to city than what Gilbert is planning for. Tempe and Glendale, for example, only have fire department facilities. Mesa is using an approach that phases in facilities over time, but the city already is behind in accommodating its own needs, Gilbert officials said.

Using other cities’ facilities comes with a cost. For example, Mesa charges $1,000 per police recruit for a facility fee. It costs $1,500 per fire recruit.

“It’s really inefficient having to drive for 30, 40, 50 miles to go to training and keep a unit out of service to do that,” Jobusch said.

“Our partners and neighboring agencies have been really good about helping us out as much as they can, but it’s just gotten to the point where you can’t count on it for any length of time,” Jobusch said.

Petersen agreed that driving to places like Coolidge is impractical, making building some facilities important, but he pointed out that the town can utilize some of its own space and continue to partner with other departments for some training. It is a formula he believed has worked in making Gilbert among the country’s safest municipalities, according to FBI statistics.

“Do your classroom training, drive out there, do your practical,” Petersen said. “If you have to have like a debriefing, maybe get in a circle and do that or you can always drive back to the classroom and finish it up. It’s a 10-, 15-minute drive. It’s not bad. Life doesn’t end because you have to drive somewhere else.”

Cook said he also initially balked at the price tag for the facility and did some research on his own to see if the town was not better served to continue its training with other municipal departments.

He even went so far as to offer three cities $6 million in cash from Gilbert to fund additional expansion at their facilities if it would ensure Gilbert would get an assured allotment of their available training time. But their answers were all no.

He said it also became clear to him that Gilbert would get less and less time on other departments’ calendars.

“[Other towns] basically said, ‘you know, Gilbert is going to be a very, very large organization that would be very demanding on our campus,’” Cook said. “‘And we just wouldn’t be able to accommodate you based upon your needs.’”

Gilbert expects its usage of the new facility would exceed 90 percent of its available time at opening, increasing as the town’s build-out approaches, according to town estimates.

“Ultimately, this results in better trained public safety personnel when they respond to our individual citizens’ call for help and in a workforce that can better support our growth in Gilbert,” Daniels said.