Gilbert’s largest north-south street without a freeway interchange is about to gain access to the Loop 202-Santan Freeway.

Lindsay Road will soon have a Santan Freeway interchange built to relieve congestion at nearby exits and accommodate an anticipated uptick in commuter traffic.

The $22.14 million interchange construction project will provide another outlet to Gilbert’s growing Central Business District, which expects its employment base to grow more than 150 percent in the next dozen years, according to town data.

The project will more immediately alleviate nearby traffic that backs up on the Gilbert and Val Vista on- and off-ramps—sometimes all the way back onto the freeway—once the project is completed.

“I think this is an incredibly important project for the town, both in the short and the long term, specifically because of some of the dangerous road conditions we see along the 202 freeway, both at Gilbert Road and [Val Vista] Road,” Mayor Jenn Daniels said. “This is a reliever for residents and for the businesses that will occupy this corridor.”

But to get there, officials say there will be pain. Adjacent major arterial roadways—Pecos, Germann and Lindsay roads—will need to be widened, and utilities will have to be relocated to make way for the interchange and handle the additional traffic the interchange will bring, according to project documents.

Though construction on the interchange is not expected to start until March 2021, work will begin as soon as December on the utility relocations, Town Engineer David Fabiano said.

Once the design and relocations are done, the Arizona Department of Transportation will start construction. ADOT allocated funding for fiscal year 2021, according to plan documents.

The Maricopa Association of Governments, the area’s regional transportation-planning agency, conducted the original feasibility study on the interchange, but Gilbert acted more proactively to keep things moving along on the project, Fabiano said, as the town saw a chance to shave some years off the project—from possibly 12 to 15 years down to about 10.

ADOT, usually in charge at this point, decided to allow the town to spearhead the project and prepare construction efforts, and the town was willing to take on the responsibility, Fabiano said.

“We were feeling pretty acutely the transportation need for this facility to be operational,” he said.

Drivers getting onto or off the freeways at the Gilbert and Val Vista exits–the major north-south arterials immediately east and west of Lindsay–know the town’s needs at rush hour.

Val Vista Road, for example, handled an average 54,700 cars daily in 2017 between Pecos and Germann roads, according to a traffic count map produced by the town. Lindsay Road, by contrast, had 16,900 cars on that north-south stretch in 2017.

What may not be as readily apparent is the expected future traffic from anticipated business development.

The proposed interchange sits in the midst of one of the town’s “employment corridors,” the Central Business District. Developments there like Park Lucero and Rivulon highlight the coming employment and subsequent traffic boom.

Traffic on that Pecos to Germann stretch of Val Vista is projected to nearly double to 104,000 cars daily without an interchange at Lindsay Road, according to town studies. The same stretch at Lindsay would increase without the interchange but to a lesser degree of 28,000 cars per day.

“We’re seeing businesses locate to the area [near Lindsay and Loop 202], but also there’s a lot of housing, especially to the southern portion of the 202,” Daniels said. “And when you talk about Val Vista Road being congested and Gilbert Road being congested, Lindsay is an obvious alternate route. We need to make that viable in the long term.”

Utility modifications will start in December when the Roosevelt Water Conservation District, one of the affected utilities, has its dry-up period—when water doesn’t flow into the canals.

Traffic restrictions of various lengths will take place with each modification.

“The [drivers] that will feel [construction] most acutely are those that use that as their primary means of getting over to Campo Verde High School and getting back from Campo Verde High School,” Fabiano said. “We get some big queues when school’s in session. There will be some closures for short periods of time, but the road will remain open with a lane of traffic in each direction for almost all of the project time.”

In preparation for lane closures, the town has been communicating with the school administrators to plan and prepare—a process that will continue, Gilbert Public Schools Director of Marketing and Communications Dawn Antestenis said.

The short closures will happen to allow the project to move forward into construction, Fabiano said. The town also studied the effects on the area’s biology, most notably Zanjero Park, which sits southeast of the Lindsay Road overpass. The converted water retention basin is a desert park with horseback trails and burrowing owl habitat.

No permanent effects are expected at Zanjero Park, according to the project’s FAQ put out by the town. However, access may be affected at times, and the parking and driveway will change with the interchange’s construction.

The town’s plan calls for Lindsay Road to be widened from one or two lanes to three in both directions between Pecos and Germann roads over two different capital improvement projects. The second project also will widen Germann between Mustang Drive and Val Vista Road to three lanes in each direction, according to town documents.

At public hearings, the interchange seemed well received by businesses and less so by residents concerned about traffic changing the character of their neighborhoods. As the project draws nearer, businesses still seem on board, but that does not mean they are immune to what the road construction will mean in the coming years.

“In the short term, you always worry about the additional restrictions, how it’s going to impact what’s already pretty severe restricted access in conjunction with all the construction going on across the street,” said insurance agent Robert Laubmeier, whose office sits across Lindsay from the back end of Rivulon. “But frankly it’s something that has to happen with all of the development going on. Otherwise, it’s going to become unmanageable.”

The widening of Lindsay has received some praise from residents like Madhukar Madhi, 48, a software engineer who lives south of Loop 202 off Lindsay.

“It takes a long time to cross that intersection (Germann and Lindsay) because it’s single lane. … I think it (the widening) will make it easy for us,” he said.

Daniels, though, did understand some residents’ concerns that were expressed at public meetings last year.

“We want to be sensitive to those needs and, and we recognize that maybe this isn’t something that they ever thought would happen in the future,” she said. “But such is the growth of Gilbert that we’ve got to make some changes.” 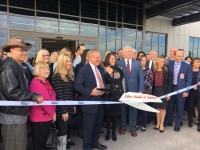 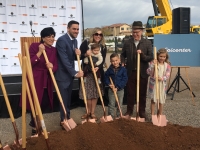