Across Gilbert, as with other places in the country, the signs are out: Now hiring.

While those signs may demonstrate an economy ready to get rolling again, experts said they also hint at a new pandemic problem: a shortage of workers, felt particularly hard in sectors such as hospitality and retail.

Employment in Arizona is down 1.5% across the board from February 2020 to June 2021, but as much as 9.9% in leisure and hospitality, according to data from the U.S. Chamber of Commerce. 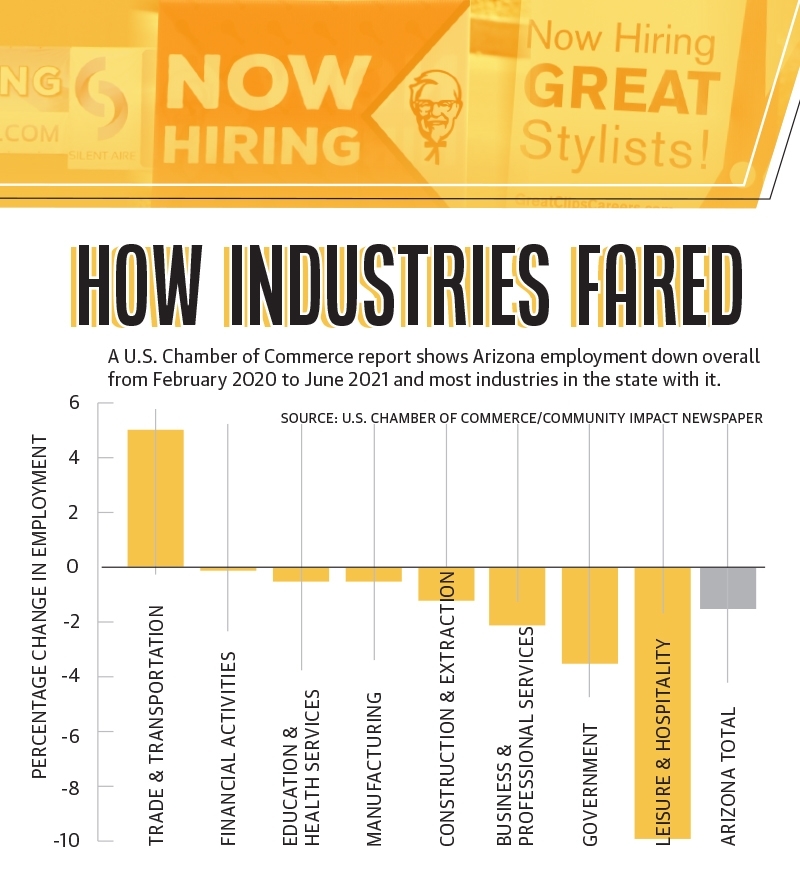 “What we’re hearing across the board, especially in our trade and service industries, is just the overwhelming challenge of finding workforce,” said Sarah Watts, Gilbert Chamber of Commerce president and CEO. “And especially in an industry like restaurants right now, what they’re really doing is just competing with other like industries and attracting talent away from one another, especially in those entry-level positions.”

Watts related a friend’s story of a McDonald’s in town that was handing out job applications along with a plea to pass them along to anyone needing work when customers paid for their orders.

In the wake of the early waves of the pandemic, workers may now be looking at opportunities to advance their careers past entry-level or low-wage jobs, experts said. In fact, part of the city of Gilbert’s #GilbertTogether business recovery effort are programs to train and upskill workers who may be looking for more.

Although Arizona Commerce Authority reports unemployment is down 3.5 percentage points to 4.9% from June 2020 to June 2021, economist Jim Rounds of the Rounds Consulting Group in Tempe cautions that numbers must be compared to pre-pandemic levels. Comparing February 2020 to June 2021, unemployment is up 1.7 percentage points with employment down nearly 200 jobs and labor force up 2,500 jobs. 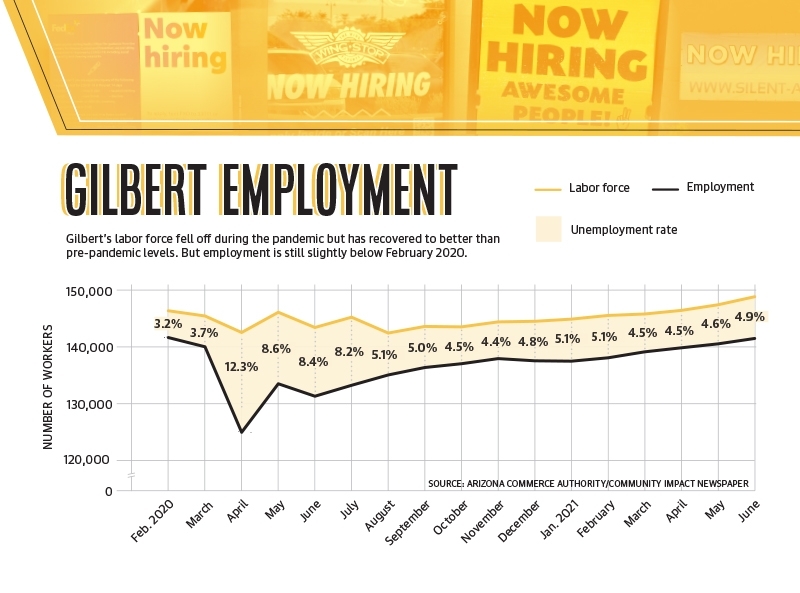 The U.S. Chamber report showed most sectors down in employment in Arizona. Hardest hit beyond leisure and hospitality was professional and business services down 2.1% and construction and extraction 1.2%. Trade and transportation, which includes shipping activities, was the lone sector that saw growth, up 5%.

Rounds said an economic imbalance was brought on by the pandemic and subsequent stimulus packages. Those monies allowed lower wage workers to not have to work. He said the imbalance will work itself out over time, especially as federal stimulus money goes away.

“You’re going to end up with higher wages, which is going to draw people back into the market—temporarily,” he said. “It’ll put pressure on profits and is going to put pressure on small businesses, but that’s the way it has to work. And when we start to see the stimulus money is not flowing through the economy, like it has been so far, then you’re going to see people looking for work, and that’ll put downward pressure on wages again.”

Rounds said some social factors that came through the pandemic have had an effect.

“We went through a very tough time, and people re-evaluated their need to work in general,” he said. “Maybe you had two-worker households convert into one, and they realized that was something that they liked. So there were some social changes, but part of it is also the fact that we’re printing money and we’re spending it and we’re helping people out. There was a need for it, but the longer it continues, there’s going to be some of these economic imbalances.”

Rounds cited U.S. Bureau of Labor Statistics numbers that show Arizona as having the third best job recovery rate in the nation from before the pandemic to now at 87% and the Phoenix area at about 95%. He said Gilbert’s recovery is among the best in the area because of the town’s economic growth.

“A community like Gilbert, because of the strength of the economic growth, the fact that your policy makers and staff have been working very hard on diversifying the economy, bringing in higher wage jobs, you’re more resilient compared to a lot of others, which means that when you do get back into balance it’s not going to take as long,” Rounds said.

Watts said industries are competing against other industries for workers, and they end up attracting talent away from one another, especially in low-wage jobs. As a result, it is changing the approach employers are taking to the profile of the ideal candidate.

“They’re expanding what it is that they’re looking for now and knowing that they might have to invest in some training,” she said. “If [a candidate has] the right core values and fit for the organization, then perhaps they can train them into the position that they need to fill.”

But that comes with investment in training and the chance the candidate will leave to be recruited away afterward.

“Depending on the industry you’re in, you just have to be creative in showing appreciation,” she said.

Watts mentioned schedule flexibility, additional paid time off or investing in continuing education as ways employers can show that appreciation. She pointed to Wal-Mart’s recent announcement it will pay 100% of associate college tuition and books as an example.

Other businesses are helping fill the gap, too. In 2017, Jamie Baxter co-founded Qwick, a Scottsdale-based company whose gig-economy app connects food and beverage professionals who want on-demand work with businesses that need them to fill shifts.

Baxter said he believes the problem is too much demand for too little supply.

“The people on our platform are eager to work there,” he said. “They’re going out of their way to work more than 40 hours a week to try and help all these businesses. I think the negative stigma around people not wanting to work, I don’t see that. I don’t know where that’s coming from.”

Like the restaurants it serves, Qwick was hit hard during the pandemic, but Baxter can point to an exact moment when it changed, although he cannot explain it.

“Feb. 6 this year, it was like the light switch went back on,” he said. “All of a sudden the revenue went up, and we ended up doing three [times] the revenue that month than the revenue we had done the previous month.”

Anthony Marko, the operating manager of Panera Bread in SanTan Pavilions, said he believes Gilbert has plenty of kids looking for first jobs and parents wanting their children to get experience, but it is harder to compete for daytime staff because of higher wages elsewhere.

“I say, ‘don’t compete; be better,’” Marko said. “We look at it as we want to be the place to be employed, not the place for better pay. Our kids work here because it’s fun. We don’t try to save money on labor. We look at it as an investment.”

Gilbert used some of its stimulus money in 2020 to put together a three-part, $18 million business recovery program it dubbed #GilbertTogether. The Gilbert Chamber of Commerce worked with the town’s economic development team to determine business needs and develop the program.

One part of the program, which town officials said was aimed at business and workers’ “resiliency,” included free career and technical training for Gilbert residents and workers through the Maricopa County Community College District.

Diane Meza, director of the Maricopa Information Technology Institute-East Valley, which ran the program, said the program was a means for the town to help workers retool or upskill to position them for employment. Through the program, students can get certificates or even degrees.

Meza noted that 60 of the 109 students enrolled in the program so far have fallen between ages 30-59, suggesting they are taking the opportunity left after the pandemic to improve their employment.

“These are people that have probably already had jobs and careers, and they’re coming back now,” she said. “I think that’s telling.”

Rounds said some people are using the pandemic period as an opportunity to improve their employment from lower-wage jobs.

“Because of the demand, people are making more money and they’re not willing to take the lower-wage jobs,” he said. “So the jobs are coming back, but we still have a little things are still a little mismatched.”