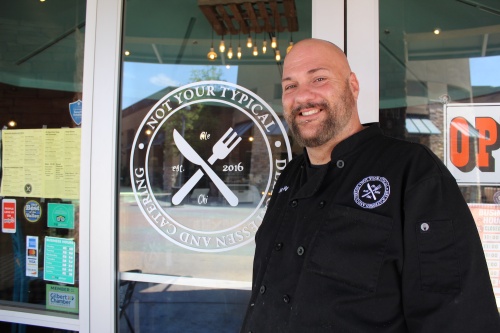 Chef W Rieth will open Not Your Typical Culinary Academy on Aug. 26.

Award-winning Gilbert restaurant Not Your Typical Deli announced it will open a culinary academy for adults with special needs.

Chef W Rieth, executive director of the program, has taught culinary courses to people in the community for about eight years. He said he has met some participants with autism throughout his teaching and reached out to the special needs community to see if they would be interested in a program.

Rieth, who most often goes by Chef W, said the response was overwhelming, which led him to create the Not Your Typical Culinary Academy.

“I want to be a trailblazer,” Rieth said. “I want people to open their doors to people who might not get the opportunity any other way.”

The culinary academy is a 12-week program designed to provide adults with autism or disabilities the skills needed to work in the restaurant or hospitality industry. Instruction will be begin Aug. 26.

Rieth said the academy is also meant to teach people with autism and disabilities how to survive and live a “typical life” even if they choose not to work in one of these industries.

“It’s a step towards independence,” he said.

Rieth has been in the culinary industry since he was 12. He has worked as an executive chef, owned and opened restaurants, and spent time doing product development demonstrations. He opened Not Your Typical Deli in Gilbert with the purpose of creating an integrated work environment by employing people with special needs.

Since its opening in 2016, the deli, located in the Gilbert Town Square at 1166 S. Gilbert Road, Ste. 110, has won many awards, including the best place to get a sandwich in Arizona from Travel + Leisure Magazine. Rieth said the awards have been a testament of the hard work of his staff.

“I didn’t do it; my staff did it,” he said. “I’m proud of what these guys are accomplishing.”

Rieth said his favorite part about being in the restaurant business has been making in impact on the community. Through his integrated work environment and new culinary academy, he is doing just that.

“For many years I was not fulfilled in the culinary industry,” Rieth said. “Having a mission involved with what I’m doing brings a whole new light. I can’t wait to change hundreds and thousands of lives.”
SHARE THIS STORY