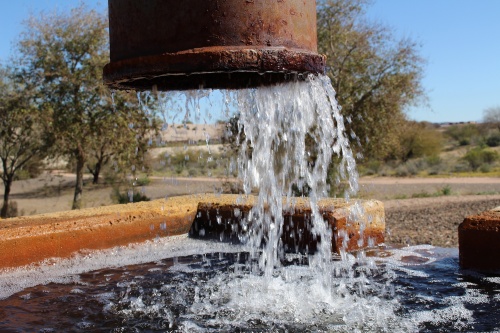 When Arizona lawmakers agreed Jan. 31 to sign on to a seven-state drought-contingency plan, which will govern how much water the states can tap from the Colorado River, Gilbert officials were among those praising the accord.

The agreement kept in place a priority system for river water users, allowing Gilbert to count on water supplies it will need toward build-out.

Still, there might be some pain if drought conditions persist and the water elevation levels at Lake Mead continue to fall. The result could be higher costs to end users, town officials said.

However, residents and businesses, who already had a rate increase last November, can feel good about one thing: When they turn on the faucets in their homes or establishments, they can count on water flowing.

“We can say that we’ve got enough water not for today, not for tomorrow, but for 100 years if you come out here,” Gilbert Water Resources Manager Eric Braun said. “There’s not a lot of businesses that plan for 100 years, but a city is in the forever business. And so we did. We planned for 100 years.”


DCP and getting water

The focus of the drought-contingency plan, or DCP, is managing the Colorado River, which is an important water supply to seven states and Mexico. Its upper basin serves Wyoming, Colorado, New Mexico and Utah, and Lake Powell in the Page area acts as a reservoir for the upper basin. The lower basin supplies Arizona, California, Nevada and Mexico with Lake Mead near Las Vegas as the reservoir.

Various laws, contracts, settlements and agreements have shaped the water’s distribution dating back to the 1930s. The most significant development for Gilbert and much of the state was the establishment of the Central Arizona Project, a 336-mile aqueduct system that brings river water to central and southern Arizona. CAP water feeds Gilbert with about one-third of its water supply, according to town documents, the single largest source.

That system frequently has been credited with allowing Arizona to flourish, particularly in the desert regions of the state. However, Arizona is in the 21st year of a long-term drought, according to the Arizona State Climate Office. That, and the Southwest’s population growth, have begun to tax Lake Mead, officials said.

Braun said upper basin states were not using all of their water allotment for many years, allowing Lake Mead to draw from Lake Powell to stay steady. But Lake Powell is no longer able to supply enough water to maintain Lake Mead's water elevation.

“Back in 2007, [the states] saw the writing on the wall and we came together and came up with the 2007 guidelines of what are we going to do when we hit drought conditions,” Gilbert Intergovernmental Relations Director René Guillen said. “[But] as you get more years, you get more data. We found out that those [guidelines] are probably not aggressive enough.”

Enter DCP, wherein the states attempted to identify how they would cut back water use as the drought persists.

That was important to Gilbert because it keeps in place the moves it has made in the past to assure the town’s water supply.

“We’ve made purchases,” Guillen said about Gilbert. “We have storage credits that we use. We recharge effluent. We do reclaim water. We do conservation efforts, and all of this is toward building that portfolio to allow us to secure Gilbert’s future for generations.”

The DCP has not quite reached the finish line in the eyes of U.S. Bureau of Reclamation Commissioner Brenda Burman, who has said some agreements among the state, tribes and water districts were left incomplete. But Burman gave the state until March 4 to button up the remainder of the agreements before the federal government would intervene in any way.

Gilbert Vice Mayor Eddie Cook, who serves as the vice president of the Arizona Municipal Water Users Association, which advocated for the cities to Arizona’s DCP steering committee, said once the federal government agrees the DCP is finalized, it leaves Gilbert in good shape.

Gilbert farmers get most of their water outside the CAP system, primarily from the Roosevelt Water Conservation District, Braun said.

Keeping the priority system in place was critical to Gilbert in its efforts to bring in business. Braun said one of the first three questions businesses ask when they consider moving to Gilbert is if it has enough water for them. With a plan to manage the Colorado River water, the answer is yes, he added.

Braun said residents will not go without water at any point.

What could change, however, is the cost of getting that water. Braun called it a coin flip as to whether Lake Mead’s water elevation will fall to the next tier in 2020, triggering water supply reductions. However, if Gilbert receives less water from the CAP next year, the costs of receiving less will not go down in corresponding fashion.

Rather, CAP figures its rates by calculating its costs and then dividing that by how much water it delivers. With operations and maintenance costs fairly fixed, the cost of water would go up as the amount of water goes down.

In figuring the impact, Braun said the town can only do rough estimates, which purport about an $800,000-$1 million increase in annual costs for the town, plus another $500,000-$600,000 in lost annual revenue from the sale of surplus supplies the town has had.

Braun said some options would be rate increases or could include deferred maintenance on infrastructure or delaying some water-quality projects. Those policy choices would be left to Town Council to decide.

Braun said conservation is important to Gilbert’s water supply, but said efficiency may be the better term.

“When people think of conservation, sometimes they think of, ‘I can’t water my lawn today or this month because we’re in a drought,’” he said. “Droughts in Arizona are not monthly; they’re yearly, decadal. We grew up as a state knowing that we have to build long-term plans for saving water.”

In scenario modeling the town has conducted, Gilbert has enough water in 90 percent of cases studied, leaving only the worst-case scenarios. The town has a four-tier water reduction management plan for such events.

A study the town did a couple years ago with the Alliance for Water Efficiency found the town is using significantly less water per capita than it did in the mid-1990s, though overall use has increased because of Gilbert’s growth.

“We have done conservation for generations here,” Braun said. “Efficiency has always been built into the way we do things.”