Construction to begin on crucial stretch of I-10 in 2021, affecting drivers across the Valley

Hundreds of thousands of drivers traverse the Broadway Curve section of I-10 each day, and the Arizona Department of Transportation will begin construction on the 11-mile stretch of the freeway in 2021 in the region’s largest freeway redevelopment project to date.

“Maricopa County, including the East Valley, continues to grow year after year,” ADOT spokesperson Tom Herrmann said. “If we were to do nothing, we would be approaching a gridlock.”

Construction will take place on I-10 between I-17 and Loop 202, including the Broadway Curve. The project will affect freeways in Phoenix, Chandler, Tempe and the town of Guadalupe. The Broadway Curve project marks the state’s first major freeway reconstruction effort, Herrmann said.

“This is a much-needed improvement to I-10,” Herrmann said. “The Broadway Curve sees about 300,000 vehicles a day and is the second-busiest section of Arizona freeways.”

According to data from ADOT, officials expect the number of drivers on this segment of the freeway to grow by 25% by 2040. The project is expected to save drivers 2.5 million hours annually otherwise spent in traffic, according to the Maricopa Association of Governments, the entity responsible for planning Maricopa County’s major highway improvements.

Jenn Daniels, former Gilbert mayor and current member of the Arizona State Transportation Board, said the project is a “massive undertaking.”

“Ultimately this project will improve access at businesses,” Daniels said. “It will help with the weekday traffic and, specifically, cut down on the amount of time that people ultimately will spend commuting or trying to access this particular area or navigate through this particular part of our region.”

Herrmann said ADOT expects to finalize the construction contract by early 2021, and the project is slated to begin in mid- to late 2021 and take about three years to complete. The project is expected to cost about $643 million, but the final cost will be determined in the negotiation process, Herrmann said. Funding for the project stems from Proposition 400, a dedicated sales tax for transportation approved by Maricopa County voters in 2004, Highway User Revenue Fund and federal funds. 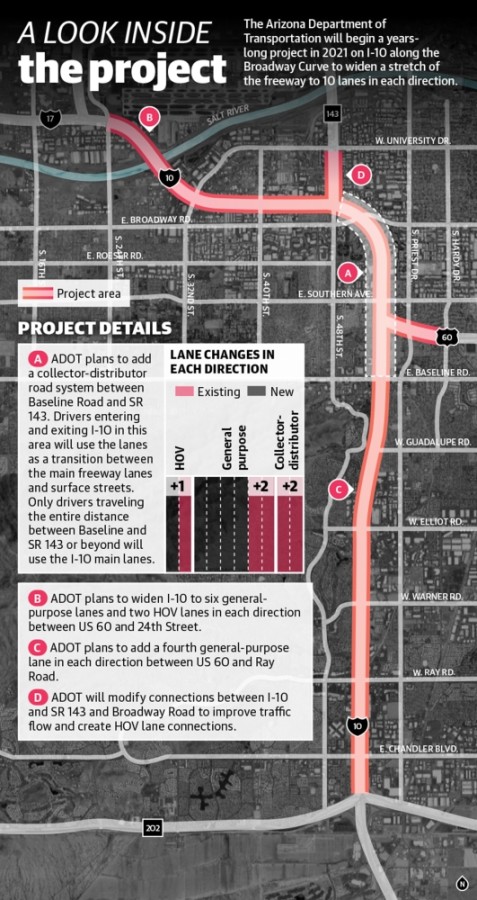 Throughout the course of the project, construction crews will widen I-10 from four to six general-purpose lanes and two HOV lanes between 24th Street and US 60, according to ADOT.

Herrmann said ADOT will be building a “collector-distributor” road system between Baseline Road and 40th Street to separate local and through traffic on I-10. Drivers getting on or off the freeway in these spots will stay in the new lanes to get on and off the freeway, Herrmann said.

“What that will do is make traffic flow more safely and ultimately make I-10 safer,” Herrmann said. “A lot of people right now are switching lanes very quickly because of how the exits are lined up. It’s difficult even when traffic is light, you have to quickly merge. This will not only help keep traffic flowing, but it will prevent the I-10 from getting more congested and make it much safer with these specialized lanes for entering and exiting.”

The project will also add a fourth general-purpose lane on I-10 from US 60 to Ray Road and will modify the connection at SR 143, Broadway Road and US 60 to improve traffic flow and safety to and from Sky Harbor Airport. Herrmann said crews will also replace ramps at I-10 interchanges at SR 143 and US 60 with new ramps, including building new bridges.

“I’m really excited about the collector-distributor roads,” said Kristin Myers, a transportation planner with the Maricopa Association of Governments. “As a user of the system, I do have to maneuver through traffic coming in to work and going out to different places. It will be nice to use these and have less congestion and to not have to go on the mainline freeway.”

Myers said the improvements will allow for drivers to spend less time in traffic, with rush hour estimated to move 37% faster.

“It will be a complete improvement,” Myers said. “For commuters, it’s a 2.5 million-hour savings per year.”

The Broadway Curve is known as a key commerce corridor connecting the East Valley and downtown Phoenix as well as connecting the region to Sky Harbor Airport.

Herrmann said the corridor is integral to the Valley’s export-based economy, with products manufactured here and sold elsewhere bringing new money to the state. He said ADOT has been working closely with trucking associations and local businesses to spread the word about the project ahead of the start of construction.

The Maricopa Association of Governments estimates the project will create $658 million in new economic activity for the area.

“ADOT’s expansion of the Broadway Curve is indicative of the state and region’s intentional infrastructure planning, ensuring our busy commuter corridors meet the demands of our growing market,” said Chris Camacho, president and CEO of the Greater Phoenix Economic Council. “Modern and dependable infrastructure allows for easy and reliable access to the region and consumers, which is vital in securing new businesses to Greater Phoenix.”

“It will have a current impact,” Daniels said. “But it will grow local business sales by a substantial amount when there is better access.”

Chandler Chamber of Commerce CEO and President Terri Kimble said the widening of the Broadway Curve is a long time coming.

“As a major intersecting hub of commuters for the Valley, the initial construction project may be cumbersome to commuters for the duration of the project, but the payoff here will be huge,” Kimble said. “It’s a chance to open up and expand the transportation infrastructure allowing access to top employers for our workforce.”

Herrmann said ADOT and other officials are aware construction will create challenges as crews work to expand the freeway and cause temporary road closures or blockages. He said most of the work will be done at night and on weekends to mitigate traffic congestion.

“There will be short-term challenges and inconveniences in exchange for long-term benefits,” Herrmann said.

Daniels said, in order to maintain the infrastructure of Maricopa County’s freeways and roadways, management—even if it is a temporary inconvenience to drivers—must occur.

"We’ve invested billions of dollars in this system,” Daniels said. “What a travesty it would be if we walked away from the system and said, ‘It’s going to take care of itself.’ It doesn’t. Transportation will never take care of itself. I kind of look at transportation as like a living, breathing organism, and it just requires constant diligence and keeping it alive and healthy, just like any other living thing.”