ADOT is testing a concrete pavement treatment along Loop 202.

Arizona Department of Transportation engineers are testing a section of eastbound Loop 202 in Chandler where a new pavement treatment was employed to heal the aging, worn-down freeway.

The treatment—called diamond grinding—involves a specialized grinding machine that uses diamond-tipped saw blades to both smooth and add new grooves in a freeway's concrete-base pavement, according to a news release from ADOT. Doug Nintzel, a spokesperson for ADOT, said in an email the diamond grinding of the right two eastbound lanes of Loop 202 between Loop 101 and Dobson Road was done last month.

The diamond grind test section is along the eastbound Loop 202's right two lanes near Dobson Road. Crews removed a 1-inch layer of rubberized asphalt that was "worn out by time, traffic and Mother Nature," according to ADOT.

"This is another tool in our pavement-improvement tool box," said Randy Everett, senior administrator of ADOT's Central Construction and Maintenance District serving the Phoenix area, in a news release. "This is an opportunity to explore options and see how the diamond grind performs in an area where the rubberized asphalt finally wore down well after its expected lifespan of 10 years."

Much of Loop 202's rubberized asphalt surface between the US 60 interchange in Mesa and Loop 101 in Chandler was also given an asphalt-based sealant recently, according to ADOT. The sealant was a fog seal treatment designed to extend the life of the existing pavement and is a treatment ADOT has used on other Valley freeways.
SHARE THIS STORY 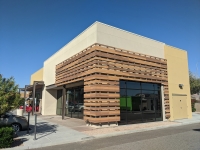