The city of Chandler is adding to its police force after pleas from Chandler police officials were lobbed at Chandler City Council in April saying the department is understaffed and officers are overworked.

“The issue is people are tired, and this is not a money issue any longer—it’s not about throwing money,” said Chandler Police Chief Sean Duggan during a council meeting April 8. “The issue is pressing people to work. It’s been an exhausting year.”

Duggan requested that 27 officers be added to the department in the 2021-22 fiscal year and provided City Council with a plan to add 10 additional officers each fiscal year through 2026.

City Council is looking at allocating $3.8 million in one-time COVID-19 relief dollars to the Chandler Police Department to fund 10 new positions and related vehicle and equipment needs in the department over the next several fiscal years.

Duggan also requested the city fill 15 “over hire” positions, which allow the department to hire individuals train them in the police academy and in the field while existing officers who may be set to leave the department continue in their roles, according to the city.

Duggan also requested two additional positions be funded—a mental health coordinator for the department and a school resource officer—in fiscal year 2021-22 for a total of 27 positions for next year—12 new positions and 15 overhires. The positions would be funded through a combination of the city’s general fund and dollars anticipated to be received through the American Rescue Plan Act for COVID-19 relief. A total cost has not been identified by the city.

The city is looking to add 40 positions over the course of the next five fiscal years on top of this year’s 27, according to a presentation made to council April 23. The department would get 49 new sworn police officers and 18 professional staff under the plan. City officials said they have not yet identified the total cost of this proposal.

Meanwhile, the Chandler Law Enforcement Association and the Chandler Lieutenants and Sergeants Association released a proposal April 19 to hire an additional 83 sworn officers over the next five years. The number from the two groups asks for 16 more officers than the number presented to City Council by Duggan in April.

Chandler Law Enforcement Association President Mike Collins said the department has not kept up with the hiring of new officers in the last decade.

“I compare it to a vehicle,” Collins said. “We all have vehicles and we have to put tires on them and change the oil and get regular maintenance. But if in 13 years we don’t change the tires and only patch them, securing leaks as best as we can, then we get to a point where the car needs a huge amount of work. That’s exactly what is happening now.”

The department has 334 officers—the same number it had in 2008, Duggan said.

Duggan told the council April 8 that due to changes in the nature of crime in the last decade and the toll of the last year—Chandler Police is working to keep the city safe. To do that they have had to move officers around to assure patrol is staffed.

"We are facing all these challenges with the exact same number of police officers that we had in 2008, and clearly the world has changed since 2008,” Duggan said. “We continue to be a safe city ... We are dealing with issues that weren’t here 10 years ago and an increase in the societal issues and pressures that didn’t exist 13 years ago.”

Duggan told City Council during an April 21 retreat that he needed more staffing to “stop the bleeding in patrol” as staffing patrol is the department’s top priority. Duggan said he felt the 27 officers in the next fiscal year and the plan to hire 47 more in the following fiscal years for a total of 67, would address the staffing issue.

"This is the number that I have identified that will help maintain our safe city status and will continue to ensure that we keep up this trajectory of being a very safe city,” Duggan said April 23. 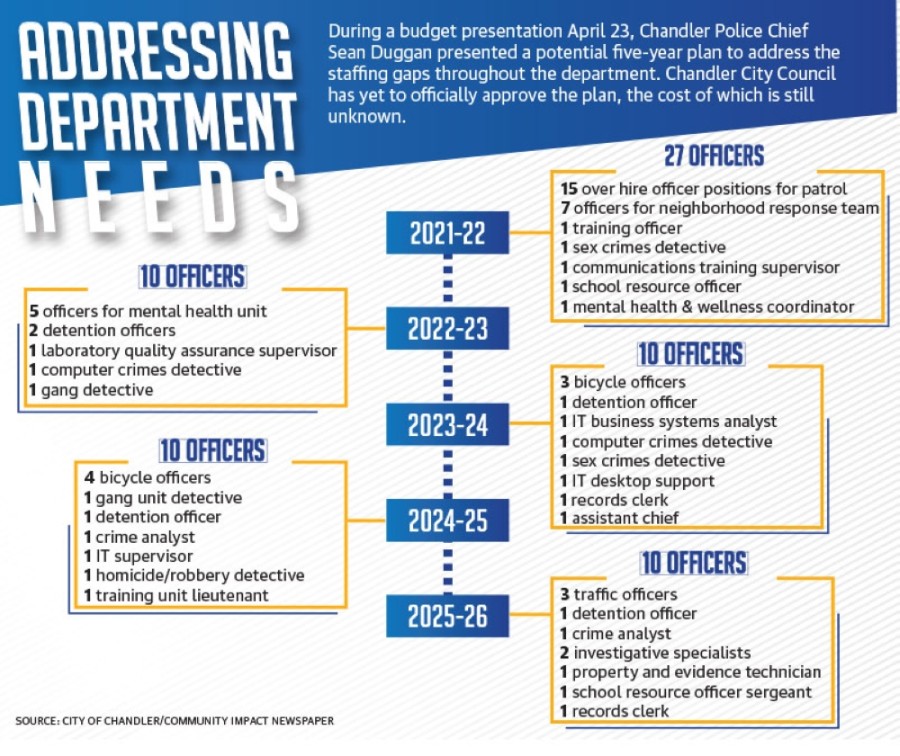 Duggan told City Council on April 8 the city has seen a sharp increase in gun-related crimes—with 75 shooting incidents in 2020 compared to 59 in the previous year. In 2020, those gun-related crimes resulted in 26 injured victims and nine deaths, according to Duggan.

The department has also seen a rise in sexual assaults—more than double 2014 numbers—as well as calls for unhoused individuals and for the detention of those with mental illnesses.

“Homelessness is not a crime,” Duggan said. “... It’s increasing exponentially year after year. This is an issue not being addressed throughout society, and it falls into the lap of police.”

Even with the city’s recent increase in violent crime, Chandler is experiencing historic lows of other types of crimes—the city’s overall crime rate has dropped by more than 30% in the last decade, Duggan said.

But Duggan said the city is facing the same problems as police departments across the country, and recruiting for open positions has been difficult.

“There aren’t many people out there who are willing to do the difficult job of being a police officer,” Duggan told the council.

The department is rolling out hiring incentives, and the city is looking to contract out with a recruiter to fill vacant positions across the city, including the police department. Chandler City Council spent the better part of several meetings in April discussing police department funding. All council members were in favor of ensuring the department has the resources it needs to maintain the city’s safety.

“Our cops need support,” Council Member OD Harris said April 8. “[The chief] has taken a brave stance to say what he needs. I don’t want tired cops pulling me over. I want them to be refreshed. I want them to be able to have time with their families.”

Council Member Matt Orlando said he wants to make sure City Council is aware of the needs of the police department.

“Obviously the council has to come up with a plan and work with staff to fund the 40 police officers over the next four years,” Orlando said. “But we need the bodies, the chief told us we need the bodies and now we have to figure out how we are going to fund it.”

Orlando said there is promise in using one-time coronavirus relief funds to support police salaries over the four years those funds are available.

“There’s two questions,” Orlando said. “What is a legitimate number of officers we need to continue to keep us safe, and how we fund it is a different discussion.”

Collins said the city’s population growth and the complexity of crimes have also contributed to the understaffed department.

“We are cut to the bone,” Collins said. “... We have asked more and more and more of our officers, and they are so burned out that they just want to go home and be able to unplug.”

According to the proposal Duggan presented April 23, of the 27 positions requested for the next fiscal year, 15 of them are over hire positions for patrol; seven are for officers assigned to the neighborhood response team; one is a training officer; one is a sex crimes detective; one is a communications training supervisor; one is a school resource officer and one is a police mental health and wellness coordinator.

Of those 27 positions, 10 are funded via one-time coronavirus relief dollars the city is expecting but has yet to receive, and 15 are over-hire positions that are funded elsewhere in the budget. The proposed budget—not including that one-time money—for the personnel in the department is $69.94 million for a total of 507 police department personnel.

The 5-year plan Duggan presented proposes after FY 2021-22 adding an additional 10 positions each fiscal year through 2026, though city officials have yet to calculate the overall cost of that proposal. Acting City Manager Josh Wright said the city will need to re-evaluate the plan annually and there are still several unknowns—including the coronavirus relief dollars the city is expecting.

“We have experienced significant declines in crime over the past decade, with last year marking our lowest crime rate since the 1980s,” Mayor Kevin Hartke said. “With that said, we have a number of challenges for our police department as staffing needs, technology and crimes continue to evolve.”

After the chief’s budget proposal, Collins said it was “a start” but the number outlined in the Chandler Law Enforcement Association Chandler Lieutenants & Sergeants Association proposal was what the groups representing Chandler officers feel is the true need of the department.

“We think that’s a good start and recognition that we need to stop the bleeding,” Collins said. “But it’s just that—a start.”•